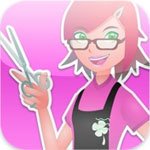 Like many of you girls out there, I went to see “He’s Just Not That Into You” last weekend. It was definitely a movie about women for women (a “chick flick,” as my husband would say), but I could relate, and I enjoyed it. I realize that we women spend a lot of time consoling each other, convincing our girlfriends that “your hair looks great” or “those jeans do NOT make you look fat.”
We’re all in search of that little boost that can temporarily melt away the stress of a bad day, or the way a great new hairdo just makes a girl feel fantastic! Sally’s Salon is definitely one of those happy little stress-relievers that we just can’t get enough of.
Like many girls when they first discover the scissors and trim their own hair, I confess that I used to dream of owning my own hair salon. Maybe that’s why Sally’s Salon originally caught my attention. It really appealed to the “girl” in me. It sounded like fun to live the fantasy of cutting and dying hair. And as I began to play, I found some kind of giddy enjoyment in coloring an old lady’s hair purple, or in “cutting” a male client’s hair into a Mohawk style.
Although the PC version of Sally’s Salon was very popular, I wasn’t sure if I’d like the game when formatted for the iPhone. I thought the style of game – constantly clicking – would not work very well on the iPhone. I was apprehensive about how much I would enjoy making my finger do all of the work on the iPhone’s touch screen that my mouse is so efficient at performing on the PC.
Much to my surprise, the game is still very effective on the iPhone, and I had no trouble using my finger to do all of the tasks required. I found myself getting caught up in styling hair, growing my salon, and earning rewards. Some call these types of games “time management” or “click management” games, but I prefer to think of them as “multi-tasking” (something women can do far better than men, if you ask me).
The tasks are simplistic at first, challenging you just enough to keep the game interesting. However, when you count your first earnings, you learn that you need to shop for new chairs for customers to wait in, new stations for hair treatments, and other stylists who can help you perform the myriad of tasks associated with running your own salon. You also earn trophies for your performance as a stylist and salon owner. This aspect of the game makes it even more fun to play, as you are motivated to continually improve your salon so that you can make more money and pass more levels.
For those of you who really like “multi-tasking” games, “Survival Mode” is made for you. Your goal is to play for as long as you can without losing customers. It gets pretty crazy after awhile with customers pouring through the door and Sally running all over trying to handle as many stations as she can. This gets a little frantic and you can’t play it in this mode very well unless you are really concentrating.
While the graphics are cute and appealing, I found some other aspects of the game were lacking. The music was un-interesting and didn’t add to the experience. The only sound effects happen at start-up when there are some cool bubbles popping. But it is a shame that there aren’t more sounds and/or music in the game given the superior sound capabilities of the iPhone.
I also had a minor technical problem. The game crashed at level 3 and I had to reboot my iPhone several times before I could finally play the game again. I didn’t lose any of my data, however, I just couldn’t get past the opening screen as the game tried to load. This may have been a random bug because it never happened again after that one time.
Aside from the uninspiring sound and the technical glitch I encountered, I found Sally’s Salon to be a terrific value. At only $0.99, it will provide you hours of girl fantasy fun. All in all, Sally’s Salon is a great way to pass the time while waiting in line at the bank, or even when you’re sitting in the theater, waiting for the next great “chick movie” to start.