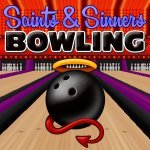 Stop me if you’ve heard this one…

A minister, a biker, a soccer mom, a robot and a two-pound Chihuahua named Skillet walk into a bowling alley in Hope, North Dakota and…

There’s not that much of a joke there, really. But it’s the sort of scenario you should prepare for when you download and play Large Animal Games’ new Saints and Sinners Bowling. With the help of Oberon, they’ve pulled together a wild and various cast of characters to taunt you as they challenge your ten-pin game. Trust me, that Chihuahua is the fiercest stone-hurler that ever stepped into a pair of rented shoes.

The controls are simple to pick up, and should be familiar to anyone who has played a bowling game before. Using the mouse, you drag the ball back and fling it forward again;the faster you fling, the harder the throw. Once the ball is rolling, you can steer it a bit using the mouse. The slower a ball is rolling, the easier it is to steer. It is a very intuitive system, and thanks to the genuinely smooth performance the game offers, you can count on control of the ball from foul line to pin deck. The interaction between your ball and the pins is also very realistic; you’ll even need a good topspin to get those turkeys.

Large Animal has done a great job creating a light and friendly atmosphere with S&S Bowling. The characters pun, taunt, compliment, and occasionally wager with you or each other. As you bowl against one, a second Saint or Sinner will show up to watch, injecting commentary where necessary or challenging you to “see if you can only knock down eight pins” for some cash or charms.

Ah yes, the charms. These little toys are deployed over the course of the match; collected, bought, and traded with the other bowlers. Essentially, they are powers used to help your rolls or hamper your opponent’s. Bowlers can deploy one of their six charms during an individual frame. Charms can shrink or grow the bowling ball or pins, split the ball in two at the end of the lane, widen the gutters, turn the pins into rubber or lead, and more.

There is, as you might expect, a certain amount of strategy behind using charms. Suppose your opponent shrinks your pins, making it harder to make a strike. You can grow them right back to normal. If they drop a slalom-course of road cones in the middle of your lane, you can fill the gutters with concrete and roll right around. There are intricate tricks to each charm, some of which can be learned by watching how the computer players use them, though they’re not perfectly logical. The Lead Pins charm, for example, is not easily countered, and you’ll never meet an opponent who knows the best way to use the Gutter Filler.

Visually, S&S Bowling is enticing. The menus are all very clean and distinct and well designed, without anything hidden out of sight. It has a cartoonish styling that works really well for the type of game and setting.

The game is structured around a national map. You earn cash by making bets with other players, and spend that cash to unlock alleys in other cities. Sometimes, you’ll have the chance to win a tournament and keep your trophies in a display case along with special prizes for doing tasks in the game, like helping another bowler (the Good Samaritan prize)or using 100 charms in your career. In the beginning, tt can be hard to get enough cash together to open new lanes, partly because tournaments (which occur fairly infrequently) don’t pay, and partly because you can’t make wagers on games yourself. Instead, you have to wait for another character to come along and offer to buy one of your charms. This all gets much easier later in the game. When you don’t need the cash as much, you’re flooded with it.

The game’s strongest point, I think, and the one that makes Saints and Sinners Bowling stand out, is in the audio. It has such crisp sound effects and background sounds that voices for the characters are just not needed. Every charm also has a defining sound. The city names are even chimed by a small chorus of backup singers. The rumble of the ball, the striking of the pins, and the trumpeting sounds that announce a strike or spare are all fantastic. On top of that, Large Animal has done something with S&S Bowling that other developers may wish to heed: like most downloadable games, they have a fairly repetitive musical soundtrack, but theirs fades out and lets the sound effects take over from time to time, only to return as you approach the final frames. That little trick really keeps the boredom to a minimum!

On the whole, Saints and Sinners Bowling is a charmingly creative take on bowling games. Large Animal Games and Oberon have handed us a game that is one of the best of its breed, though there are still a few kinks to work out before we’d call this a real holy roller.