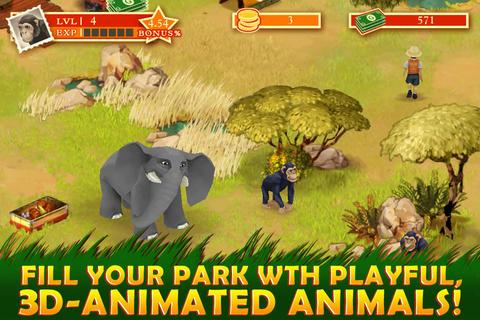 Safari Zoo looks pretty, but insists on being quite the money pit

Facebook and mobile gaming spaces can’t seem to get enough of the pay-as-you-go sims. Safari Zoo is the latest micro-transaction scheme aimed at casuals, and though it’s free to download, it’ll cost you plenty of time or money…or both.

If there’s one thing Safari Zoo does especially well, it’s make a good first impression. It’s evident at first glance that some real time and care went into the game’s presentation. The visuals are fully polygonal, offering fluid animations and a very polished touch overall. The game does a fine job walking the player through the basics, and with just a few taps on your touch screen, you’ll be leveled up and running your own exotic exhibition.

There’s no story here. Safari Zoo‘s approach is much like that of Cityville. You’re introduced to a plot of land, asked to add an elephant habitat, set up a shop where visitors can purchase snacks, and then the game pretty much hands over the reins to you. The gameplay thrust is simple: add animal habitats, shops and décor; collect “greenbacks” from your venues; expand your zoo land, wash, rinse, and repeat.

Unfortunately, Safari Zoo throws the currency obstacle in the player’s way right from the very start. In addition to greenbacks, you’ll also need coins to unlock or purchase various goods in the game. Your very first quest is to build a lion habitat, which costs 10 coins. You, of course, won’t have enough coins to make the purchase, which leads to Safari Zoo‘s second fatal mistake: you don’t get more coins from leveling up; you can only get more coins by purchasing them with real money. Before you can even start the game’s engine, Safari Zoo hits the breaks.

Should you purchase coins in order to progress further into the game and/or speed up the process of gameplay, you’ll find there’s little more to do in terms of interacting with your zoo than merely collecting funds or feeding your animals. Safari Zoo is pretty to look at, but the game serves as little more than a virtual ant farm.

In spite of needing coins to purchase specific types of animals or other store goods, certain animals and items can be purchased with greenbacks. There are 24 animals to unlock in all, as well as a healthy selection of shops, décor, and land expansions. Coin packages range from lots of 40 for $1.99 to 5000 coins for $100. Evidently, the developers are keeping an open mind with respect to how much value some folks will place on Safari Zoo. 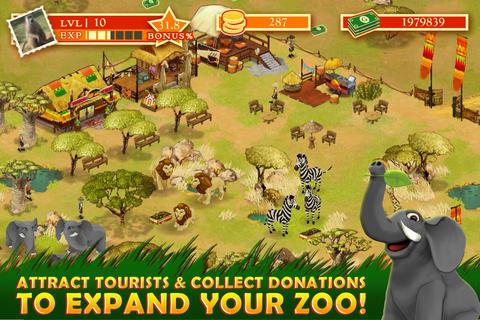 As previously mentioned, the game is very good looking, even gorgeous in some respects. The animal models are detailed and animate beautifully. The menus are slick and easy to navigate, though item placement can be a tad clumsy when your finger is obscuring the view. The animal sounds are also very well done, and though there’s almost no variety in terms of musical themes, the loops are subtle and sit well in the background.

I’m beginning to believe more and more that developers are making a futile effort to mine the same patch of gaming real estate, and I’m not convinced it’s a model that’s worked all that well in the past. Safari Zoo has some enjoyable elements I’d probably be more inclined to invest my time into if certain restrictions were absent from the equation. Either charge me outright for the game and let me play the thing, or offer a better compromise (á la Cityville). Safari Zoo does neither of these things, and though it’s pretty to look at, it’s ultimately just another shallow money trap mobile gamers should steer clear of.