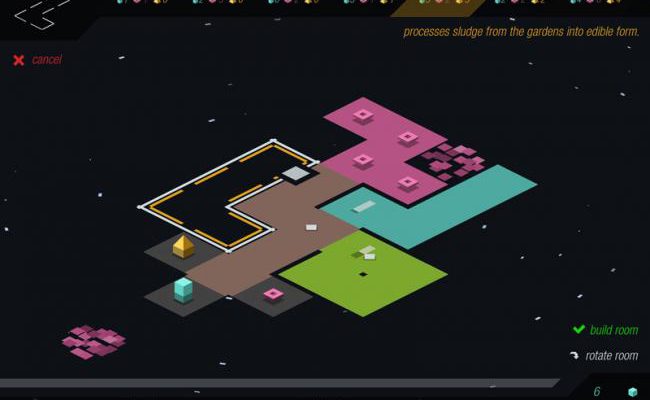 A futuristic strategy sim that draws inspiration from the past

The space station is densely packed, with cramped corridors leading from the soft blue glow of the energy reactor to the unexpected green of the hydroponic garden.  Crewmen stride along the halls, focused on kitchen duties, construction management, and onboarding new recruits.  An alarm rings out twice; all of the crewmen abandon their tasks and report to weapons stations.  In a perfectly coordinated laser gun attack, they obliterate an invading alien ship, then return to work.  This has been one minute in rymdkapsel.

Although all of this is represented in simple shapes and solid blocks of color, rymdkapsel is overwhelmingly engrossing, its world alive with activity and character that shines through its minimalist style.  The interchangeable white dashes become crewmen as they wander the station, carrying resources and donning defensive shields.  The fuchsia vectors are alien ships, flying in threatening formation nearer to your crewmen.  It’s easy to become lost in the space opera that is playing out before you, but it also requires your direct input for advancement. 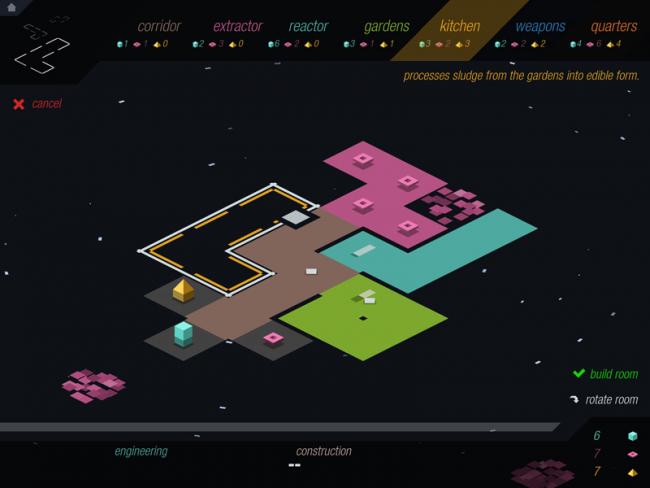 This input comes in the form of real-time strategy commands, focused on instructing those white dashes (aka your “minions”) to perform any required tasks.  Most of these tasks revolve around expanding your space station.  You begin rymdkapsel with emergency stores of the resources energy, materials, and food, which are the building blocks of every type of room you can build.  You’ll need to create resource-producing rooms to allow the station to become self-sufficient and grow, such as reactors that produce energy or gardens and kitchens that produce food.

Your minions are autonomous when assigned to an active task, but there are two main areas of gameplay that require your direct intervention.  First, you’ll need to plan out the placement and construction for new rooms and their connecting corridors.  All rooms and corridors will be built in the shape of a Tetris tetromino: the next shape to be built can be seen in the upper left corner, like the on dock space in Tetris.  This adds a unique level of strategy to rymdkapsel, requiring you to consider how your rooms fit next to each other and which room you really want to build next—should you use that “I-block” for a long corridor, or to slip a weapons station in between two other rooms?  Planning your rooms’ shapes is necessary to maximize space used and minion walking distance, reducing the time it takes to get to defensive posts or other critical areas. 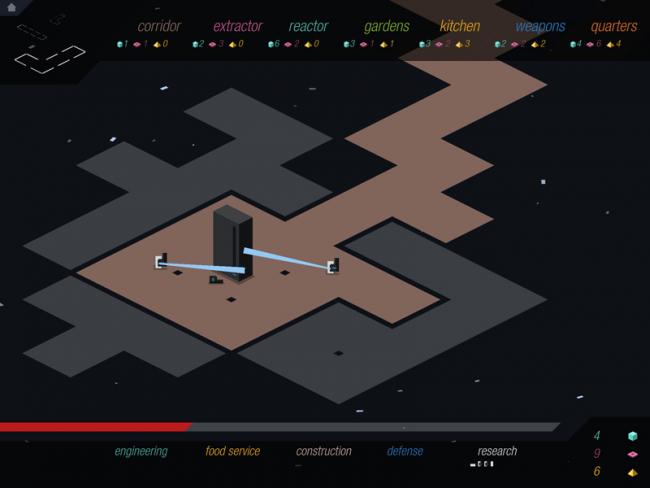 When not plotting out rooms, you’ll be instructing crewmen in their duties.  Minions can be assigned to one of five tasks: construction, engineering, food service, defense, or research.  Their roles can be swapped at any time by simply dragging a minion from one task to another, and the game intelligently moves lower priority minions first—e.g., if five minions are carrying resources for construction and one has already deposited his item and is empty-handed, he will be the first one reassigned.  It’s also easy to see if any minions are inactive—such as a construction-assigned minion with no open construction projects left—since they are displayed by horizontal, “sleeping” white dashes.  These simple features allow you to focus on the overall needs of the station and not worry about micromanaging individual minions.

Of the five duties your minions must tackle, defense and research are special, related directly to rymdkapsel‘s goals.  Although there’s no endgame or victory condition specifically, your minions’ efforts are used to build towards four monoliths stranded in space while fighting off waves of alien attackers.  Technically you don’t have to build your station towards the monoliths, but researching them provides useful bonuses—like faster minions—that make further expansion easier.  Defending against attacks is necessary to prevent losing your minions and the game, and each wave of enemies spawns faster and stronger as time goes on.  A spawn timer at the bottom of the screen indicates how close the next wave is; you’ll need to build sufficient defensive posts and instruct your minions to take up arms before the enemies appear in order to prevent being wiped out.  Eventually, though, every game will come to an end, as later waves of enemies spawn so quickly you won’t have time to recoup your inevitable losses.

Although victory in rymdkapsel is fairly open-ended, there are three missions provided as general goals and leaderboard challenges: researching all four monoliths, surviving through wave 28 of enemies, and researching all four monoliths before 45 minutes have passed.  Players who need a specific objective for motivation might have trouble returning to rymdkapsel after meeting these three goals, but the nearly endless ways you can expand thanks to the tetromino-shaped rooms should provide hours and even days of challenging gameplay. 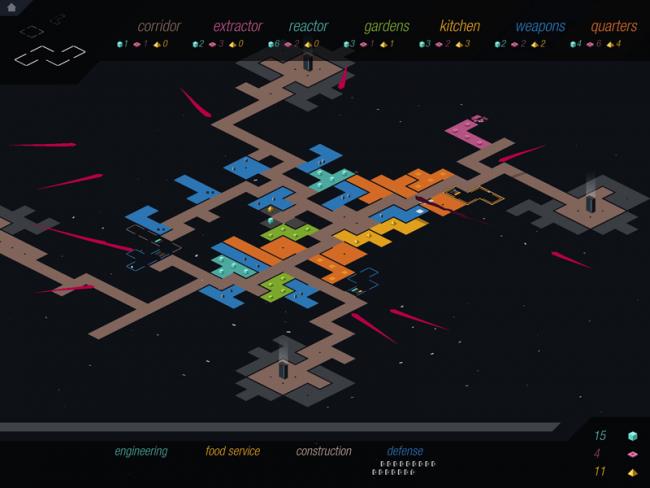 That challenge is increased by the one area in which rymdkapsel stumbles: its A.I.  Despite providing easy control of minions and the option to prioritize construction projects to help focus their efforts, the tiny white laborers are often unpredictable and incompetent at making efficient choices.  Minions will regularly walk right past a storehouse with plenty of resources to the farthest possible room for no reason; instead of ducking into the nearest defense post, they’ll wander the corridors—even past one another—to weapons stations that were nowhere near them; minions assigned to the same construction task will all carry the same resource, even if their task only requires one piece of that resource.  Considering how intuitive and nearly flawless the rest of rymdkapsel is, its minions’ A.I. is a surprising point of frustration.

And yet, even with spacey minions hampering progress, rymdkapsel is a consistently rewarding and addictive strategy experience.  Its simplicity allows players to focus on the big picture aspects of building, directing, and growth, while its puzzle-like room construction adds a layer of complexity that encourages different approaches each playthrough.  A typical game will last more than an hour, but can easily be ingested through short sessions thanks to constant auto-saves and streamlined HUD details.  Trapped on a tiny space station, with only enough power for one device and one game, I would choose rymdkapsel.