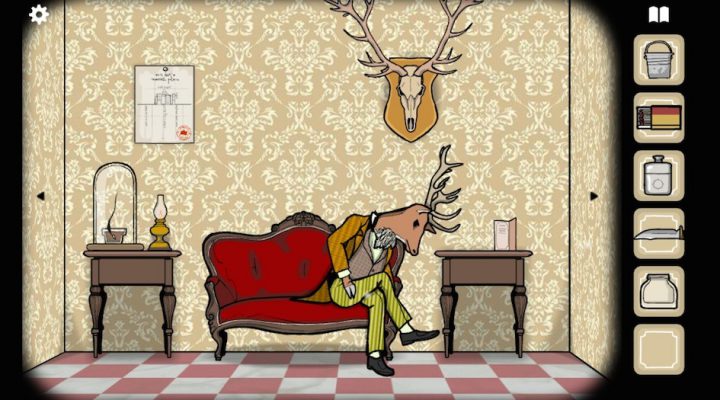 Just the right length at a few hours long

Picky about where you can tap

No hints system for when a walkthrough is too spoiler filled

Do you like the movies of Wes Anderson? If you do, then you’re at a significant advantage when it comes to enjoying Rusty Lake Hotel. A quick glance at the screenshots will tell you what you need to know here with the visual style clearly heavily influenced by Anderson’s iconic movie, The Grand Budapest Hotel. In terms of quirkiness, Rusty Lake Hotel is certainly distinctive. It’s just unfortunate that this is backed up by some fairly finicky puzzle design, meaning you’ll often be left frustrated by figuring things out.

Your objective is to ensure that five diners staying at the Rusty Lake Hotel have a pleasant stay. Except, when I say pleasant, you’re killing them off as you go along by concocting various recipes that will bump them off. Yes, it’s as dark as it sounds, occasionally bordering on the creepy. Logic doesn’t play a huge role here, which is particularly noticeable when you poison your first victim rather than stab them with a knife you’ve had all along, but then this is a game full of talking animals. It’s a kind of an excusable oddity …which is more than can be said for other issues.

Rusty Lake Hotel guides you around through gentle nudges from the other staff, along with the option to view video walkthroughs if you get really stuck. And you will get stuck. There’s a twisted logic afoot here that sort of makes sense, but also really doesn’t. Once you pick a diner to ‘help,’ you’re restricted to their room until you figure things out, so at least this is a tightly woven affair that doesn’t require you to wander too far. Instead, Rusty Lake Hotel’s main downfall is that it’s exceptionally picky about where you place objects.

In theory it should be simple, as Rusty Lake Hotel merely requires you to tap on an item in your inventory before tapping on an area in the room to interact with it. There’s no need to combine items or anything more involved than tapping. You have to be very exact with where you tap though, with the game not registering it if you’re slightly off. That’s not so bad when you’re stoically determined that you have the right idea, but when you’re floundering and uncertain, it’ll easily send you down the wrong path. 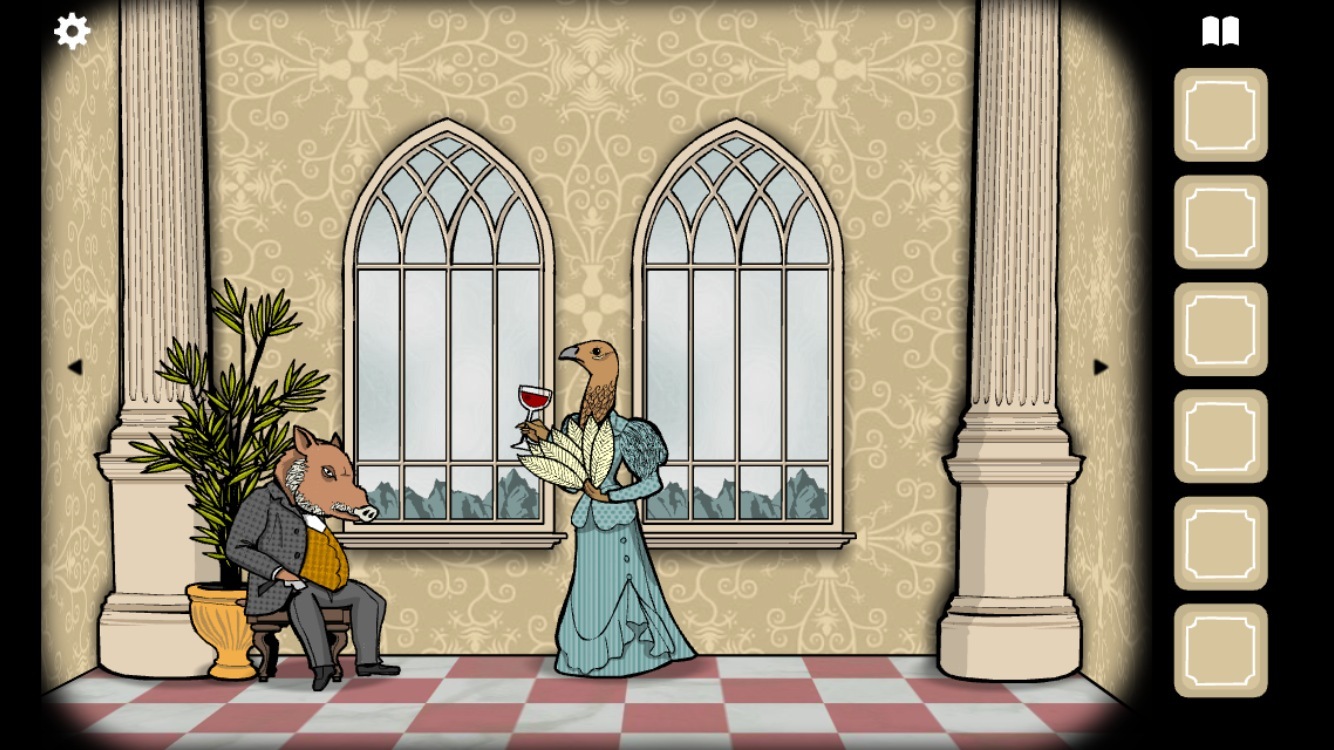 It’s the kind of annoyance that’s minimal at first but soon builds into a problem. That’s a real shame as Rusty Lake Hotel’s general quirkiness is pretty endearing itself. While it’s slow on exposition with little chatting commencing, that adds to the intrigue levels. This is a game squarely focused on puzzle solving, with just enough characterization to keep you interested — and that’d work if the puzzles weren’t obtuse. 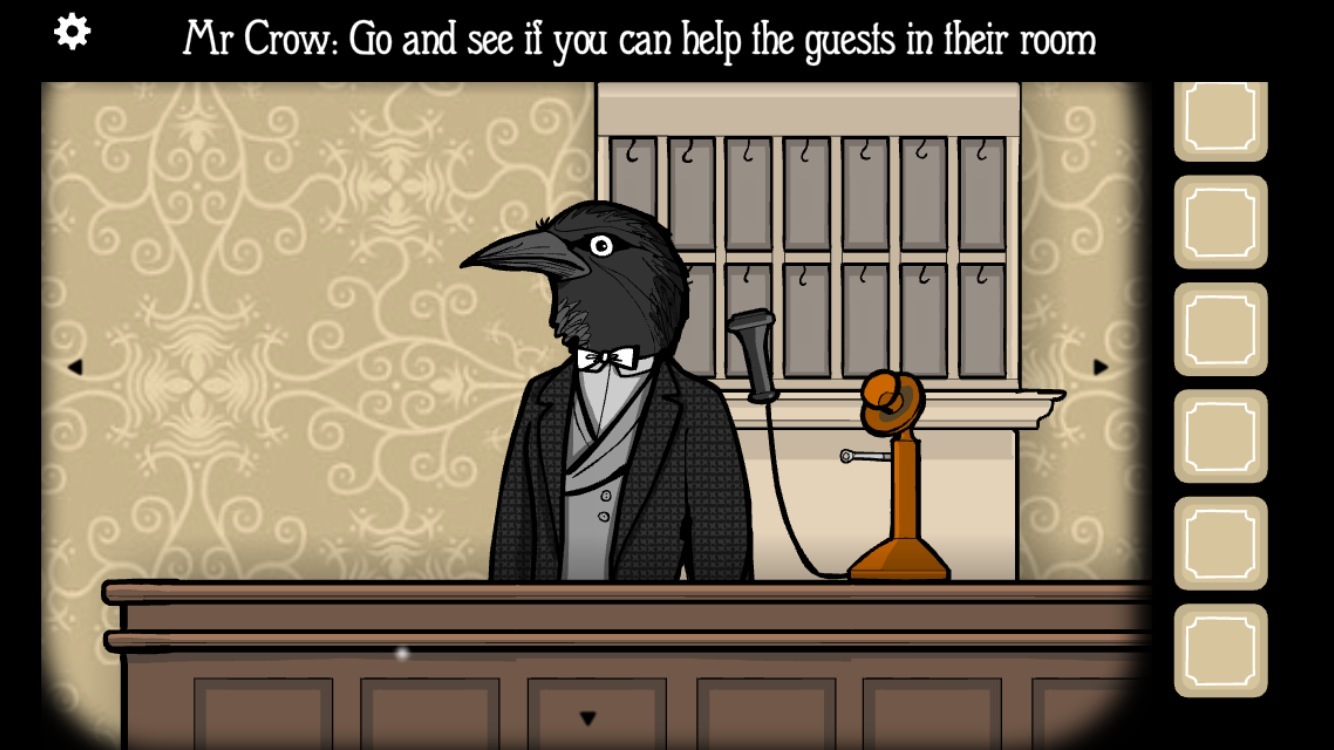 Rusty Lake Hotel does look quite glorious though. The hand drawn style is very appealing, almost like you’re dealing with an adult picture book. Backed up by a varied soundtrack that changes frequently to accommodate for each diner, it’s clear a lot of work has been put into Rusty Lake Hotel.

That’s kind of what keeps you going with it. It’s an intriguing concept that’s reasonably original compared to so many other adventure games, even if it doesn’t always quite hit the spot. You’ll need a dark sense of humor to fully appreciate it, but it’s certainly memorable. Just expect to be frustrated at times by that picky attitude to where you tap. You’ll get used to it, but that doesn’t mean that you should accept it entirely readily.