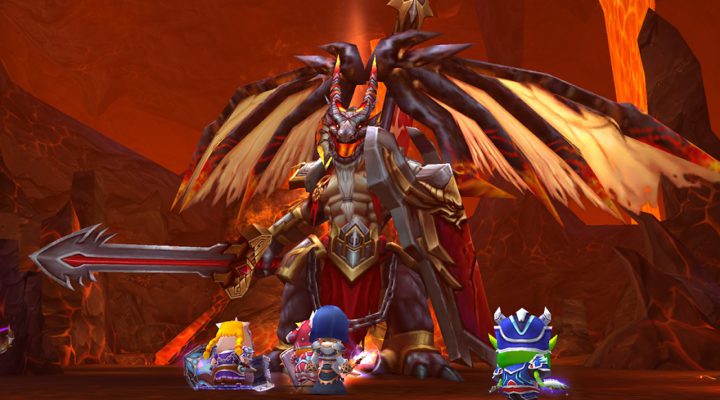 Lots to do, like professions and social activities, beyond the main campaign.

Cute and fun characters to play with and collect.

Very little to do during gameplay, you'll mostly just be watching the battle play out, with no fast-forward option.

Rush of Heroes would make a good Saturday morning cartoon. The game is filled with colorful and funny little heroes who are constantly going up against awesome, much scarier-looking villains. The levels themselves are delivered in bite-sized, action-packed chunks that are arranged to be chronologically experienced. Also, and regrettably so, Rush of Heroes would make a good cartoon because, well … there’s a lot of watching and very little playing involved.

The bad news first: Rush of Heroes is one of those games where you sit back and watch the action play out. As your little team of heroes battle the bad guys, their special abilities charge up, and when fully charged, their icons start to glow. As the player, it’s your job to pay attention and tap the glowing icons to trigger the special attacks. There’s no timing involved, no skill to it, just tap when the icons are glowing and bing-bang-boom. 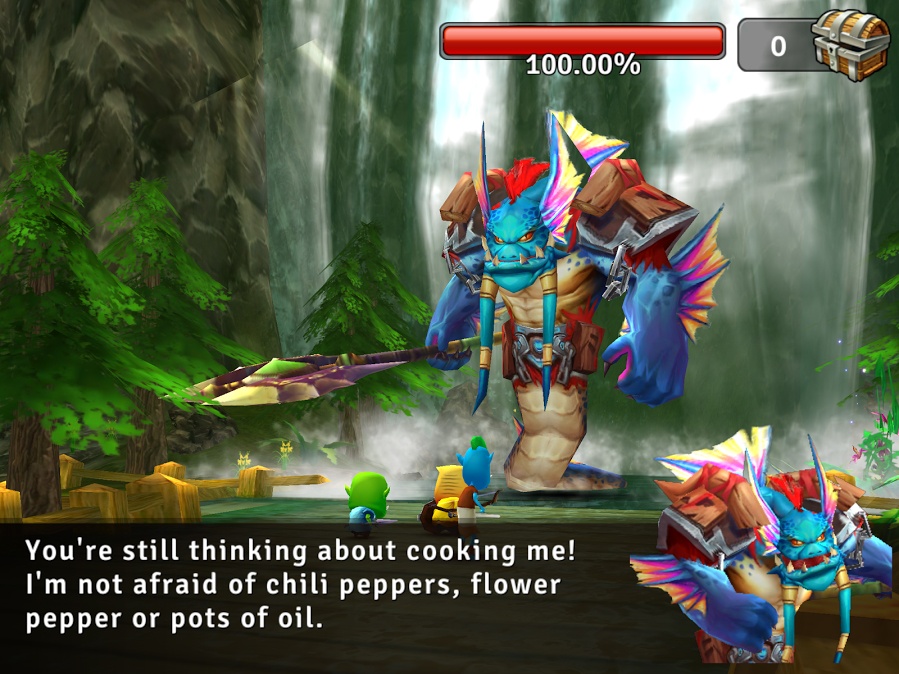 Each level involves your little team of heroes running from group of enemies to group of enemies, auto-attacking their way through them all the way to the end of the level. Experience and loot are rewarded upon successful level completion, both of which go toward powering up your heroes. Players need to constantly check their heroes to see if any upgrades are available in order to keep their heroes in peak fighting condition.

Considering that you have no control over combat beyond telling the heroes when to use their special abilities, you’ll want to be very vigilant in keeping an eye out for character upgrades. Luckily, Rush of Heroes is designed in a very user-friendly way, and all the menus are easy to navigate. The game mechanics are well explained, and I never found myself confused or overwhelmed with the options that Rush of Heroes gave me.

The levels themselves are roughly a minute or two long. This makes it easy to open Rush of Heroes up and get in a few dungeon runs during downtime throughout the day. Of course, daily login rewards encourage consistent gameplay.

Rush of Heroes also gives players lots of things to do. Beyond the regular campaign levels, there are advanced difficulty levels that challenge players for increased rewards, a maze-like dungeon-crawling experience, professions for players to work on that yield useful resources, and of course, social activities like arena matches and guilds to join.

As hands-off as Rush of Heroes is, everything else about the game is great. From the funky little heroes themselves to the striking enemy models to the user interface and soundtrack, Rush of Heroes is a charming little casual adventure game that is sure to please kids, and maybe their parents too.