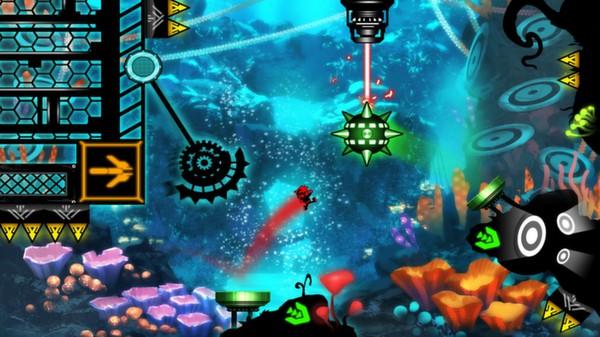 Rush Bros. fails to deliver on a glorious concept.

If I told you that Rush Bros. took the platforming style of Super Meat Boy, with traps generated based on the music tracks you import into the game – plus a multiplayer mode reminiscent of Sonic 2 – then you may well jump onto the opportunity without reading the rest of this review. But that would be an unwise move, as Rush Bros. doesn’t exactly deliver on its promise. There’s definite potential in the level design and the focus on speed runs, but the controls simply aren’t tight enough, and the music import feature is pretty flaky.

The story goes that two former DJ partners decide to go head-to-head with each other. However, instead of scratching the decks as you’d expect, they choose to, uh, race through deadly side-scrolling arenas instead? Yeah, I don’t get it either – but at least it sets us up well for a video game! As you race through each of Rush Bros.‘ levels, the focus is on getting past all the obstacles and traps as quickly as possible. There are multiple routes to take, powerups that can help you pick up the pace, and plenty of moves you can pull off such as wall jumps and sliding tackles.

Speed runs are the main course of play, with ghosts that run alongside you to reflect your best run to date, and online leaderboards for comparing yourself with the rest of the world. If you’re the sort of person who stays up until the early hours of the morning trying to shave a few more milliseconds off your best time, Rush Bros. may well talk to your heart. The local multiplayer mode is less speed run focused, and more in line with the multiplayer mode from the classic Sonic 2. You bomb along on the top half of the screen, while your friend attempts to beat you to the end. Unfortunately there’s no interaction in this mode, as you’re both running through separate versions of the level, but it’s still pretty funny.

Realistically, however, this is the mode you’re going to want to buy the game for, as the single-player suffers far too much from sketchy controls. Collision detection is awful in places, while wall jumping feels sticky. In later levels, attempting to worm your way through the more tricky obstacles that require perfect precision is nigh on impossible. What this means is that even if you do love your speed run games, you aren’t going to enjoy this one, as the speed running is completely undermined by the feel of the controls. Speed running requires tight, precise movements, and Rush Bros. does not provide. 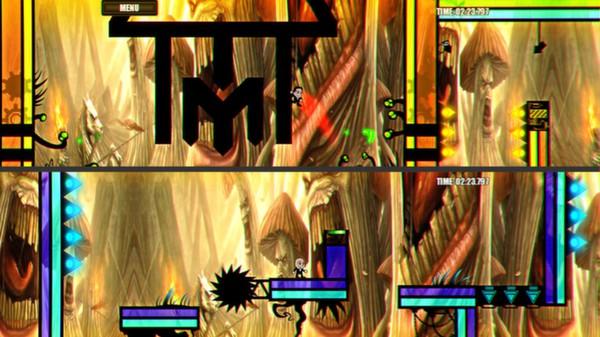 Other areas of Rush Bros. are a bit wishy-washy too. For example, you can import your own music into the game, and this randomly generates obstacles in the levels. However, importing music is far more difficult than it needs to be, with a menu system that doesn’t seem to want to let me find my music. Numerous times the game told me that files containing my music were inaccessible, and when I finally did work out a way to access them, the game appears to randomly choose which songs to allow, and which to discard. Even then, the random generation didn’t seem that great anyway – I could barely tell what it was doing.

And then there’s the online multiplayer, which is completely barren of anyone actually playing the game, and the “remix” modes which speed the game up (not fun at all) and give you only one life (definitely not fun either). What we’re left with is a concept which sounds great on paper, but leaves a hell of a lot to be desired in execution. Perhaps Rush Bros. can be fixed through future updates, but as it sits now, there are really not many reasons to play.