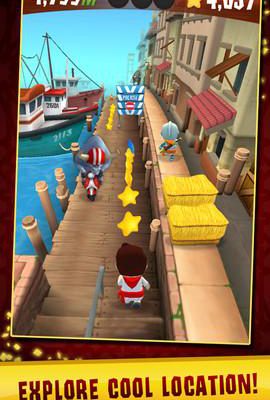 You’ve run down these streets before, but Running With Friends will show you a good time regardless.

Like the song says, sometimes it’s prudent to “Run Like Hell.” Running is particularly advised when you have a passel of mad bulls chasing you, like in Running With Friends. Zynga’s entry into the endless runner genre gives you great motivation to tear through the narrow streets of Spain (these are some angry bulls), but there are few original ideas to speak of. To be fair, you’ll be too busy hopping across bulls’ backs to really notice.

Running With Friends takes place in a small Spanish town with its own “Running With the Bulls” tradition. You’re a dumb tourist who takes one too many pictures with a strong flash bulb, and before you know it, the gate is busted and the bulls are on parade. You must run, run, run, or else you’ll get the horns. 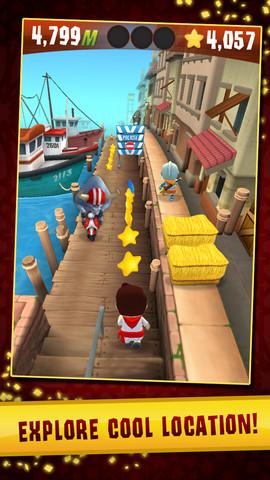 Much of what was established by Temple Run exists in Running With Friends. You need to leap over pits and obstacles, slide to break barrels and duck under tight spaces, and swipe left or right when your path makes a sudden turn (who designs streets with 90-degree turns, anyway?). The bulls are a constant presence behind you, but they also charge you from the opposite direction, and run alongside you at times. Whatever town this is, it must have one heck of a hamburger industry.

Your first few minutes with Running With Friends are bound to make you irritable because they’re so reminiscent of Temple Run and its ten billion imitators. But given time, you start to have fun in spite of yourself. The streets are packed with ramps, secret alleyways, and dangers galore that will keep you on your toes. You also pass by pockets of NPC runners, and you can shove them out of the way or jump on them: leaving them to the mercy of the bovine cannonballs behind you. 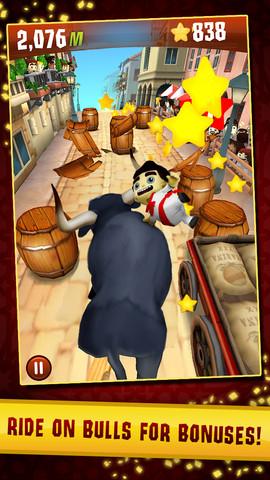 And unlike most endless runners, Running With Friends lets you interact with the danger that you’re supposed to be running from. You can ride on the bulls in certain circumstances, but it’s more fun to simply jump across the backs of the beasts running alongside you. You get a star bonus for doing so, which helps you level up.

The “With Friends” in the game’s moniker suggests that you can cheat death with a pal. It’s true. You can take turns with a friend or a random opponent to see who can run the farthest before being trampled into goo. It’s a fun challenge, though the availability of “gems” is troubling. When you mess up a run, you’re granted the option to keep running for a sum of gems. Said gems are doled out as you play, but you can just buy a mess of them with cash and put yourself at an unfair advantage next to your competition. 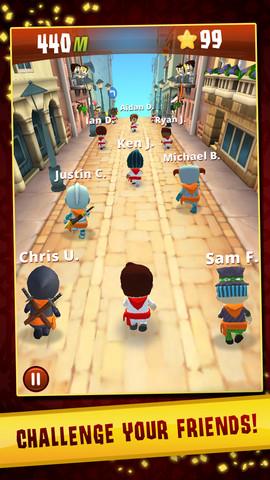 Luckily, Running With Friends works well as a single-player experience. You do need an opponent, but you can choose not to obsess over your distance. Just pull on your running shoes and get going.