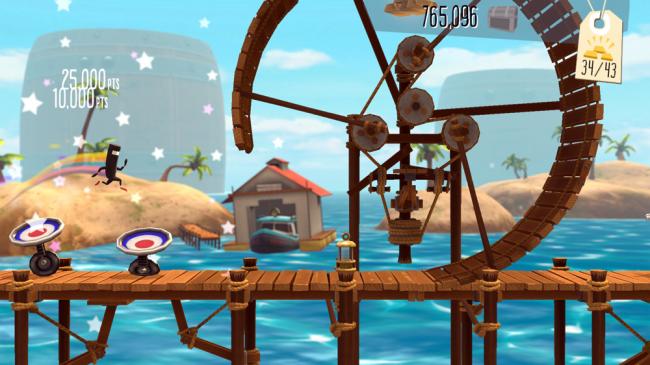 Only a game this good could pull off a title that long.

The BIT.TRIP series has brought gamers a lot of retro-inspired joy over the past four years.  Although each title in the six-game BIT.TRIP collection (Beat, Core, Fate, Flux, Runner, and Void) features wildly varied gameplay mechanics—from Pong-like paddling to Gradius-esque shooting—they all share similar visual and musical aesthetics while abstractly telling the story of Commander Video.  Runner2, the first direct sequel to a BIT.TRIP game, leaves the blocky Atari visuals behind but brings the challenge, charm, and superb gameplay of the series into the next generation.

Runner2 picks up where BIT.TRIP Runner left off: Commander Video and friends have flown after mechanical mastermind Mingrawn Timbletot, who uses a “nefarious reality unfusion beam” to send Commander Video alone to an unknown dimension.  In his quest to vanquish Timbletot’s “vulgar scheme of villainy,” Commander Video must make his way through the five worlds of this strange dimension, bashing and avoiding enemies and hazards along the way.

Although the BIT.TRIP saga tells a fluid and connected story—with references to separate entries in the series and other games, like Super Meat Boy—its focus is primarily on mind-blowing gameplay with a seamless rhythm overlay.  Runner2 lives up to this standard, expanding on the auto-runner platforming of BIT.TRIP Runner with more actions, objects, and environmental variations.  The abilities you’ll need to employ to transport Commander Video from point A to point Z are extensive: he’ll jump, slide, kick, spring, block, bounce, hang, loop-dee-loop, speed, dance, and more, often in very close succession in a single level.  Hazards and monsters range from electrified eyebots to flying beats, fireballs to giant saw-wielding robot bosses.  Even on “Quite Easy” mode, there is rarely a moment when Commander Video isn’t wriggling his way above, under, or through a potentially instant-death hazard while being edged forward by the brilliantly integrated soundtrack.

As in the original Runner, every action you take, from jumping over enemies to collecting gold, is incorporated into the game’s musical score as a chiptune-inspired sound effect.  This helps instruct your platforming—you should perform moves on the beats—and acts as a reward for perfectly timed maneuvers, as the in-game song is fleshed out with every successful action.  The red crosses, or “mode ups,” you can collect in each level provide not only a score multiplier up to four, but also expand the stage’s music with each mode up retrieved.  So while each level will begin with a slower-paced, subdued song, you’ll quickly find yourself chugging along to a frantic swelling of music that is both motivational and nerve-wracking, as the strength of the song correlates to your score and the stage’s current difficulty.

This difficulty is, not surprisingly, brutal.  Even playing with a game controller as recommended, the number of different moves necessary and the amount of hazards placed in quick succession present a thumb-blistering challenge for any player.  Admirably, Gaijin Games has extended the difficulty of Runner2 in both directions.  The three difficulty modes—Quite Easy, Just Right, and Rather Hard—vary based on the number of obstacles present in the level.  This means that a player on Rather Hard may have to jump, jump, kick, jump, slide all in a row, while the same stage on Quite Easy would require only jump, jump, wait, wait, slide.  Checkpoints placed at the halfway point of each stage allow you to restart from midway upon dying.  However, veteran players who want an extra challenge and bonus points can choose to jump over these checkpoints and forgo their resurrection benefit.  Alternate paths show up frequently in stages, with the more difficult direction indicated by a red arrow—sometimes these paths house bonus items, and sometimes they are merely there for the challenge.  Dancing, a new move you can use at any time that prevents other actions for the few seconds of the dance, awards 2,000 points (multiplied by the current mode up level) and adds another optional layer of challenge to the game.  Additionally, players of any difficulty can achieve a “perfect”—collecting every piece of gold and mode up on the stage—and attempt a “perfect+” with a bullseye mini-game at the stage’s end, making the amount of score add-ons plentiful, but still easily accessible to newcomers seeking leaderboard glory. 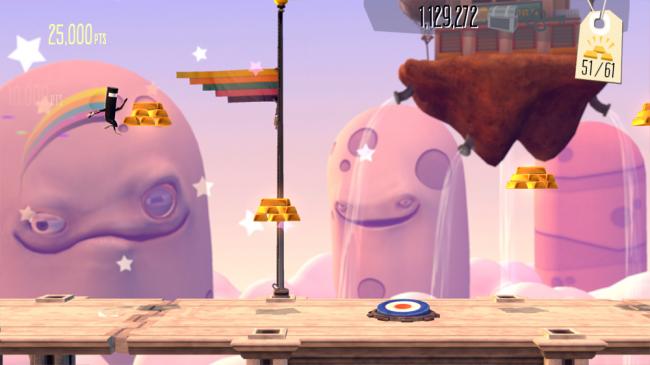 As if all of the ways to adjust your score and replay levels for a more respectable result wasn’t enough, Runner2 is full of other bonus treats that are icing on this already deadly-delicious cake.  Each world houses one hidden, playable character that can be used in place of Commander Video and who comes with their own running and dancing style.  (I’m a big fan of the burger-headed, Gangnam Style character whose name is too crudely funny to spoil.)  Every character also has a variety of unique costumes that can be unlocked by collecting treasure chests in specific levels.  Often the levels housing these characters or treasures must be unlocked by collecting a certain amount of total gold, taking an alternate path through a stage, or by first completing the “key vault” level.  For the ultra hardcore player, there are 25 retro challenges that are unlocked by finding the yellow cartridge hidden in certain levels.  Similar to the Pitfall-inspired bonus stages from the first Runner, these challenges feature the original 8-bit Commander Video as he travels through a slightly updated woodland (more MSX than Atari), collecting gold and using the same abilities you’ve unlocked up to that point to dodge enemies like spiders, scorpions, and animate spiked balls. 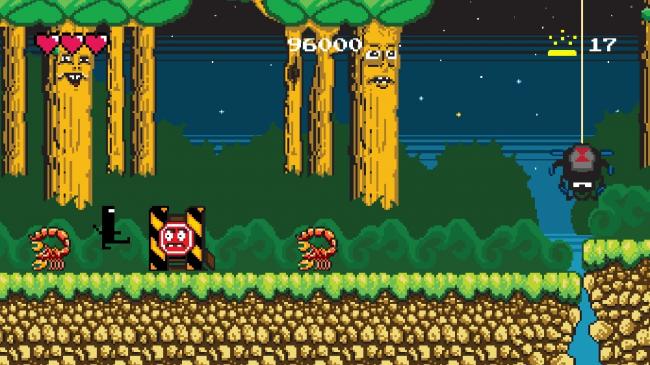 There’s practically no end to the amount of good in Runner2, from its flawless rhythm-platforming gameplay to the heaps of extras that will keep players of all abilities busy long after they’ve “beat” the game.  All of this is wrapped up in a charming and surreally engaging package, with ludicrous commercials before games, worlds that exist inside giant whales or inexplicably sad mountains, and never-nude Big Foots that run through the background in blue jean cutoffs.  When even moments of sheer controller-throwing frustration don’t make you stop playing, don’t for a second cause you to pause and consider taking a break, someone has done something very right.  That someone is Gaijin Games, and that something is BIT.TRIP Presents…Runner2: Future Legend of Rhythm Alien.