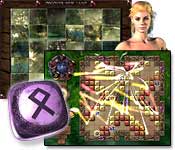 If you’re a fan of high fantasy (and match-three puzzlers to boot) get ready to hold onto your helmet: Evil sorceress Morganna’s back to haunt the world once again in Arthurian-themed head-scratcher Runes of Avalon 2, which challenges you to save a peaceful kingdom from her baneful magic. As we happily discovered though, a host of new backdrops, incantations and 100 keenly-crafted levels also make a featured appearance as well, allowing you to easily while away the afternoon keeping both the pesky witch, and boredom, safely at bay.

The plot in a nutshell: You’re tasked with helping lovely heroine Evelyne save the land from said villainess’ wicked curse. And while it’s exciting to hear the legendary Merlin’s gorgeously-rendered gal pal shout encouragement and detail your progress by way of catchy speech samples (which remain endearing far longer than anticipated thanks to a solid repertoire of sound bytes), more exciting still is actual hands-on play.

In Quest Mode, the meat of the outing, you’ll simply attempt to clear grid-like boards of varyingly-colored runes by matching horizontal or vertical patterns of three or more similarly-hued tiles. The secret to doing so: Using your wits to think several steps ahead and strategically lay down Tetris-like groups of shapes (rotatable by right-clicking) which randomly appear each time a pattern is inserted onto the backdrop. Every time you eliminate tiles, their essence is culled to help fill a container; fill all before a dwindling timer runs out, and you’re allowed to move on to the next stop on a lavishly-detailed campaign map.

Boards, naturally, come in a variety of shapes and configurations, with obstacles ranging from stones to locked tiles and walled-off sections of the screen all capable of affecting the flow of play. Also important to note is the presence of spells, which come in two types – those you can manually activate on-command using an amulet, and those which appear on tiles scattered throughout the playfield itself every time you make matches of four or more runes.

Just a few sample spells ready to be hurled at your disposal: Enchantments that can destroy targets in bursts of searing flame, mystical weavings that noticeably affect the flow of time and magical utterances that cause single colors to spread to neighboring runes in an eye-catching twinkle of lights. As for charms you don’t have as much control over, but can cheerfully cause to activate in succession through combos and chain reactions, think those that let you randomly swap tiles (teleport), destroy large swathes of on-screen real estate (bomb), lessen obstacles’ impact (heal) or even incinerate cross-shaped sections of items (holy fire).

Suffice it to say that fans of the title’s predecessor as well as newcomers alike will appreciate the sudden ability to sling witchcraft as needed to clear a path when stuck, not to mention marvel at the sight of slick special effects like explosions and color-draining swirls activating in dazzling strings of mystical mayhem.

Not only does the title look and sound good (oddly, we even dig the Celtic-flavored musical score), it also plays surprisingly well. Thank polished stage design work that really forces you to take advantage of each new spell presented, as well as solid game balancing that’ll keep you plugging away, try after try, at scenarios you’ll often just barely fail to finish. (Level skip options are further provided to prevent you from hurling the keyboard out of the window.)

Also adding charm are a variety of bonus scenarios that see you matching objects to gain access to new spells; using magic to clear playfields because certain runes aren’t provided; attempting to remove giant-sized blocks; and enjoying the odd tile-swapping hidden picture mini-game. All in all, if you played the original, a plentiful range of refinements exists that makes the formula feel somewhat fresh and new, and if you didn’t well… let’s just say there’s no sense looking back.

Granted, trouble spots do exist – spell/stage explanations aren’t always clear at first, certain levels can frustrate until you sniff out the specific strategy the designers intended, optional play modes (e.g. time attack and endless) don’t add all that much to the overall package and the presentation will have New Age hippie haters gagging with disgust. Still, if faeries and fey magic is your thing, give Runes of Avalon 2 a whirl… Renaissance Faire regular or no, you’ll find the total package proves remarkably enchanting.

The Price is Right Review