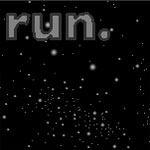 Running and jumping forms the backbone of most platformers out there. In fact, take the running and jumping out of your average platform title and you’ll find little is left. Make it the sole focus, however, and you just might be onto something good.That’s exactly what Run does from the start, handing over the simplest world imaginable and then charging you with both running and jumping to your heart’s content.

Here you take control of what can only be described as a blob with legs, your only goal to make sure he gets to each level’s exit without plummeting through the numerous holes that decorate each stage.

With the camera placed behind said blob, your only input is to move him left or right and to tell him when to jump, via the space-bar. The levels themselves are essentially long corridors, with each of the walls and ceiling able to act as a floor should you walk over to the edge, the level rotating round as you do so. This essentially gives you two ways of trying to avoid the pitfalls that stream along in regular fashion; either jumping over them, or bypassing them completely by switching sides.

The idea here is to find your own best path. What can seem like a straightforward route to the exit can quickly flood with holes, keeping your eyes out for where the path seems more solid, rather than sticking to the straight and narrow and hoping for the best, the tactic required.

Not that Run punishes failure in any form. Should you fall through a hole – and it’s almost certain you’ll capitulate to as many as you manage to avoid – then the game simply plonks you back at the start of the stage, no real delay, no life taken or damage incurred.

While many will be happy to simply play in this world over and over, Run also allows for those with a creative bent to have a go at designing the levels themselves. It’s especially simple to do so, the levels laid out in four long grids made up of squares, the only task being to decide which squares you want to be filled (acting as land in the finished stage) and which you want to be empty, naturally playing the part of the holes.

These levels can then be shared through the game itself, users having already flooded the service with thousands of level packs. Be warned, however, as some of the stages are rather less forgiving than the default levels, some literally throwing surprise after surprise at you without warning. While the standard levels tend to come with more than one route to the exit, some of the homebrew variety have but one, and they’re not always easy to find.

That said, with so many home-made levels on offer there’s opportunity aplenty to find levels that suit your tastes – or even create them yourself should your patience run dry. Run, is far more eager to welcome players than isolate them, its style of play incredibly easy to pick up but especially difficult to put back down. Limited yet still addictive, this puzzle-cum-platformer is one web game that deserves to have especially long legs.