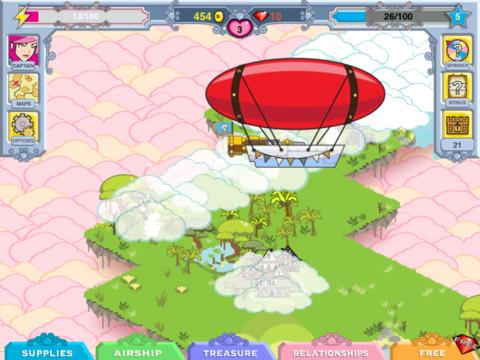 Cloud bursting for fun and profit

Does anyone else remember when treasure hunting games were all the rage on Facebook a few years back?  Games like Treasure Isle, where you’d click square by square as you “explored” territory, trying to complete collections of items?  Ruby Skies takes that idea and tries to evolve it, and while it’s not much of an evolution, the end result proves to be surprisingly addictive.

Offering up a little more story than most free-to-play titles, players will see themselves in the role of the most benevolent of all winged babies – Cupid.  Your mission?  To restore love to the world by any means possible.  And it just so happens that those means involve following around an airship full of characters, helping them meet new people and recover lost goods.

The gameplay is as simple as it gets: you’ll click on clouds to make them disappear.  That’s it.  The result?  Every cloud you dissipate will reveal something: gold, experience points, mini-games, or lost treasure.  The treasure forms the heart of the game – each character has lost a myriad of items, and as you find them and complete collections of 5 specific items, you’ll get to help the character whose collection you completed fall in love with another character of your choosing.  The more love that grows, the more love returns to the world.

Tapping on clouds uses up energy though, so there’s only so much tapping you’ll be able to complete in a single session unless you want to spend some real money.  Energy meters are becoming less and less common in free-to-play nowadays, but seeing as the treasure-hunting angle is something of a vintage idea (as far as free-to-play goes), we can forgive them for using an energy mechanic that feels similarly antiquated.

To support the cloud-tapping gameplay, there’s another mechanic in place to help hold a player’s interest: airship upgrades.  As players proceed through the game, they’ll unlock different ship parts that can be purchased in the store with coins or rubies (the game’s premium currency). While unique in appearance, these parts offer more than just a visual makeover.  Different components will modify your experience in different ways.  A certain flag, for example, may boost the amount of gold you find while exploring, while one of the many balloons you can use might raise the maximum amount of energy you can have at any one time.  There are plenty of tweaks to be had, and since they’re not always cheap, earning towards them can quickly become the carrot on a stick you need to keep coming back. 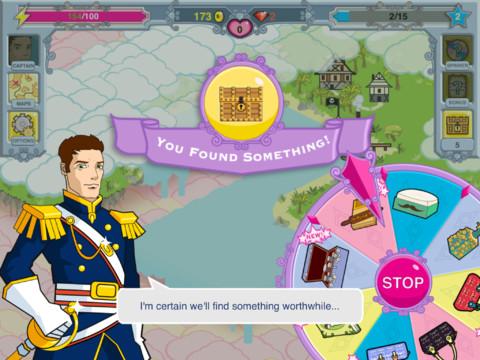 Additionally, the game offers a simple slots mini-game that will award you with a prize every time you play, from XP to currency to energy.  As a result, Ruby Skies ends up feeling fairer than most in terms of how much the game is willing to give you for free.  And since you’ll find those slots mini-games at random as you explore, you could easily get 2 or 3 free plays in any given play session.

But in the end, critics of the game are likely to call Ruby Skies a mindless clickfest, and they’ll be 100% right.  Those who lambast Facebook and F2P casual games often describe them as games where the only thing you do is click, with no further thought being required from the player.  Ruby Skies feels almost like a parody of that.  Regardless, it somehow manages to be fun and hold our interest session after session.

Yes, the basic mechanics feel a little behind the times.  And yes, there are other games that have tried to evolve click-based exploration and have done it with a little more panache (Adventure World is a great example), but Ruby Skies really seems to have that “just one more tap!” element mastered – and that’s exactly what a game like this should do.  Now if you’ll excuse me, I need to help two burly air pirates fall in love with each other.

Need for Speed Most Wanted Review