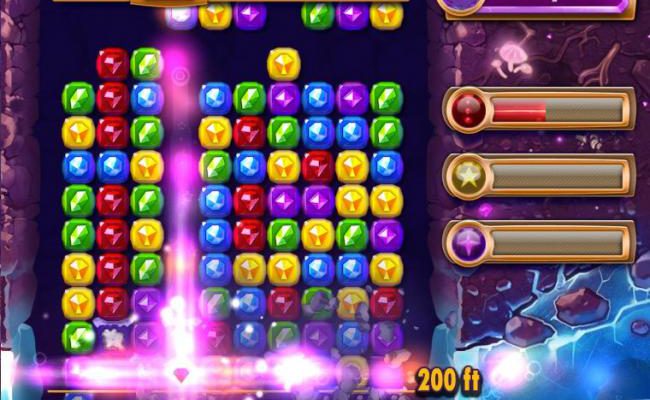 Ruby Blast digs up a new twist on match-3

Last week I caught my daughter in the backyard digging a giant hole with a trowel. When I asked what on earth she that she was doing, I was informed, quite succinctly, that “I’m digging for treasure, daddy!” This week I found myself asking Zynga the same question in regards to their latest title set in the increasingly crowded match-3 genre on Facebook, and as it turns out, the answer was largely the same.

Ruby Blast is a match-3 game that’s all about digging for treasure. That may sounds like a strange combination – and it is – but it’s also the unique twist that Zynga’s latest release needs to stand out from a crowd of similar games. Unlike its chief competitor, Diamond Dash, Ruby Blast takes the “click on large groups of colors as fast as you can” gameplay and adds in an endless/survival style twist. Players are only given 40 second on the clock, but by clearing away blocks at the bottom of the screen, they’ll dig through the rocks below, adding more time to their ticker.

It’s this endless quest for more time that turns Ruby Blast into a real edge-of-your-seat clicking frenzy, but that downward search is tempered by an equally important quest for power-ups. Sure, some elements like explosives will simply be dug up from the rocks below, but as you level up you’ll be given access to power-ups that require you to add a level of strategy to your play if you want to use them. 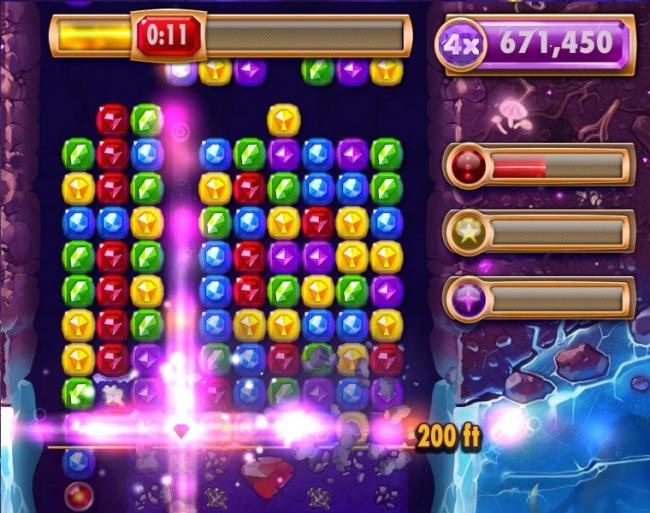 Power-ups are matched to particular colors, and you’ll need to bust that color of gems as fast as possible to fill up a meter and add one of those power-ups to the board. So you’ll find yourself facing a crisis time and time again – do I try and clear the bottom quickly, or do I look for specific colors all through the board to earn power-ups? And should I use those power-ups when they arrive, or let them build up until I’m desperate?

To bring power-ups into the game you’ll need to spend currency that you’ve earned through play. This means that, unless you’re looking to shell out real word money, you’re probably going to want to pick and choose wisely and occasionally play a few rounds without them.

It’s also worth noting that leveling up is based not on experience points, but on how many gems you acquire. Like my aforementioned daughter’s adventures in the backyard, Ruby Blast is all about digging for treasure, after all. But as much as the game is themed around treasure, the real treasure is points. 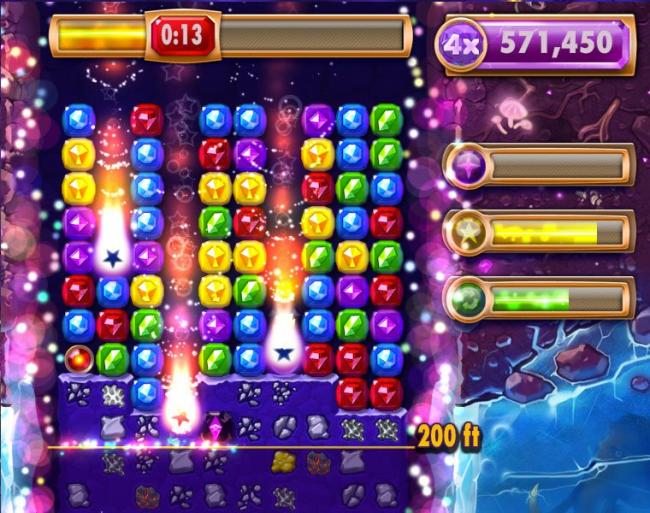 Ruby Blast is what Zynga considers an “arcade” release, and when you look at the social elements in play, it shows. Competing against your friends for a high score is really the driving factor that’ll keep you coming back, just like it would have back in the arcades of yesteryear. And what’s more, the friends-based leaderboard is reset each week, with the top 3 players earning in-game prizes like Blast Bucks and energy.

Match-3 was a well-tread genre long before it came to Facebook, let alone before Zynga decided to tackle it. But with plenty of polish, a focus on social competition, and a unique gameplay twist, Ruby Blast manages to stand head and shoulders above the competition. If you’re a fan of gem-busting fun, Ruby Blast is an absolute must-play.