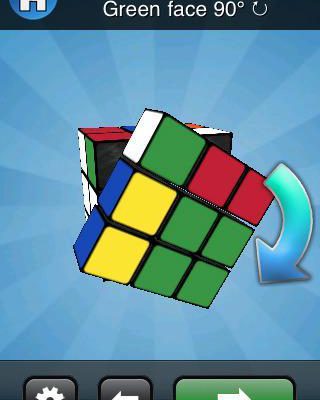 Hey there friend, do you wish you could always have a Rubik’s Cube on hand in case of unforeseen doldrums, but don’t want the unsightly bulge in your back pocket from carrying it around? Are you a fan of cube shaped shifting color puzzles but are horribly allergic to plastic? Want a toy from our childhood that most played with once and then found it’s way into the closet collecting dust? Well in that case, have I got a deal for you!

That’s right ladies and gentlemen, Rubik’s Cube has come to the iPhone! It has all the color swapping and portion rotation goodness that you remember from the good ol days, but sadly lacks the ability to pull off and replace the colored stickers in order to solve the darn thing. The Rubik’s Cube software (I’m wary of referring to it as a game) is really just a well rendered version of the real world square puzzle we all know and love. It starts by jumbling up a cube and then setting you to task of getting it back in order. You can use the touch screen to both spin it around and to move blocks and you’ll be timed on how long it takes you and how many moves it takes. 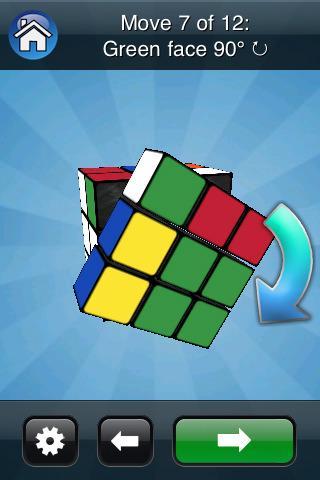 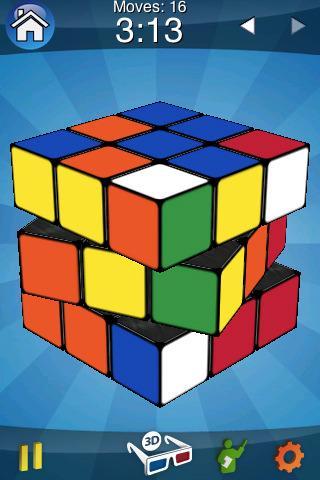 I mentioned I’m wary of calling it a game above because outside of solving the cube, there’s no real game here. It’s as much a game as the real life Rubik’s Cube is. There’s no variety of modes of other challenges to meet, just solve the cube. If you’re a big Rubik’s fan that might be a great thing but for the rest of us it can leave a bit to be desired.

You are given the option of choosing different sizes of cube, ranging from 4 squares a side all the way up to 25. Obviously the more sides the harder it is. But again you’re just left to solve it. The piece of software, like a word processor, is really just a digital replacement for a real world thing. No pencil and paper? Just write it digitally. No Rubik’s Cube? Launch this app.

There are a few other sections to help beef it up some but neither of them are games. One section is called “The Solver” and it allows you to solve all those old jumbled up Cubes you have laying around the attic. You put in the current color status of the 6 sides and it shows you how to solve it.

The other section is called “Teacher” and at first I was really excited about this. I’ve seen people on YouTube solve Rubik’s Cubes and there’s a definite skill and strategy to it. If the game could teach me some of that I’d be thrilled (if only to impress people at parties). Sadly, while this section does offer to teach some skills, it’s all just text pages so it simply reads like a PDF. There’s no tutorial or ability to have a Rubik’s Cube on screen with this text. I guess in theory you need an analog on whole you read these instructions. A real let down.

In the end it’s really tough to grade something like Rubik’s Cube, as it really comes down to a matter of expectation. If all you’re expecting is a digital representation of the regular old Cube then you’ll be dually pleased. But if you’re expecting any kind of game building off the puzzle cube, then you’re going to be disappointed.