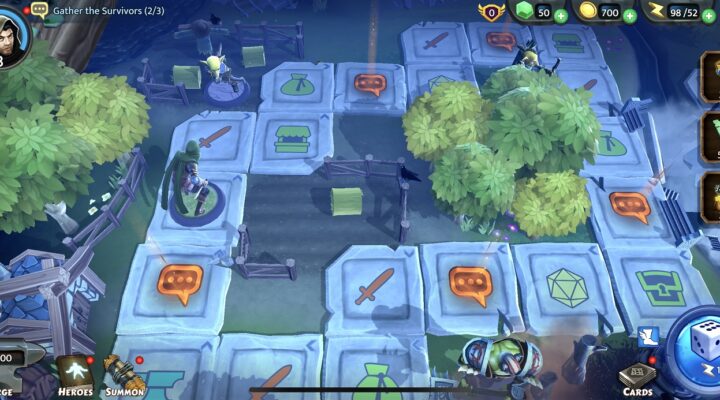 Heroes of Whitestone is a game that mixes together ideas from boardgames and the midcore RPGs that are so popular on mobile at the moment. It’s an intriguing blend, and for the most part it works pretty darn well.

You move around the game world by rolling a die, bouncing from tile to tile depending on the number you’ve rolled. Those tiles have different kinds of encounters on them – fights, quest chapters, treasure and more. You land, do something, then roll again.

The fights also have some dice thrown in for good measure. When you attack, you roll a die, and it can add special effects to your move. Different heroes have different skills, and you’ll need to build a team that works well together if you want to succeed.

There are gacha-style pulls to add new fighters, as well as plenty of upgrading and stat-boosting to get on with. You’ll unlock gear too, strapping it to your fighters to make them ever tougher.

Your movement rolls are tied to a stamina system – run out of energy and you can’t make any more moves until your stamina has recharged or you’ve bought some more. And since the dice rolls are random, sometimes you’re going to keep missing the square you’re aiming for.

Heroes of Whitestone has some neat ideas, and it just about manages to hold them all together. If you’re looking for a deeper board gaming experience, then you’re going to come away disappointed. But if you fancy a midcore RPG with more than a few twists, then it’s definitely worth checking out.