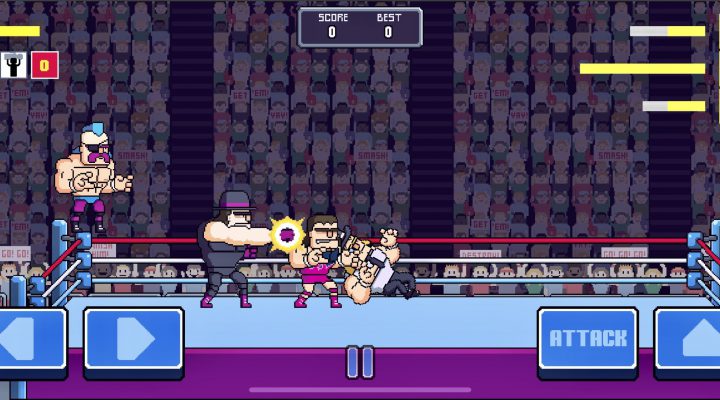 Captures the madness of the ring brilliantly

Full of good humor and heart

Really easy to pick up and play

Can get a little repetitive

Wrestling is pantomime. It needs spectacle, story lines, grand villains and plucky heroes. It needs action, humor and extremes. It needs to talk to some basic instinct in all of us with expressions of violent exertion. It also needs snazzy costumes. And Rowdy City Wrestling (download from the App Store and Google Play Store) has most of those things.

The game is an expansion on Rowdy Wrestling. This time round there’s a career mode that sees you leading a wrestler from obscurity to the giddy heights of stardom. Or to severe injury and a job making smoothies for more successful fighters.

When you’re in the ring you’ve got some simple controls at your disposal. Buttons let you shuffle left and right, attack and jump. The aim of the game is to beat your opponent until their health bar hits zero. Or yours does.

After some pummeling your foe will fall to the ground, giving you a chance to grapple them and perform a wrestling move. There are three to choose from, and performing all of them in a fight gives you a break move when you’re in danger of getting tossed yourself.

There’s a balance in the fights between bonkers physics and actual strategic scrapping. There’s less bounciness to the experience than in other Colin Lane games, but still enough that the bouts are unpredictable. And there are chairs to whack people in the face with.

Rowdy City Wrestling walks the line between the ridiculous and the practical pretty darn well, much like wrestling itself. It doesn’t have the depth of other games, but it has a frivolity to it that’s hard to dislike.

It is, by and large, a very silly game. But it’s a kind of silliness that’s going to leave you grinning from ear to ear, and with sweaty palms. And you can’t ask much more of a wrestling game than that.

Click here to read more reviews of the latest, biggest and most popular mobile games in the world