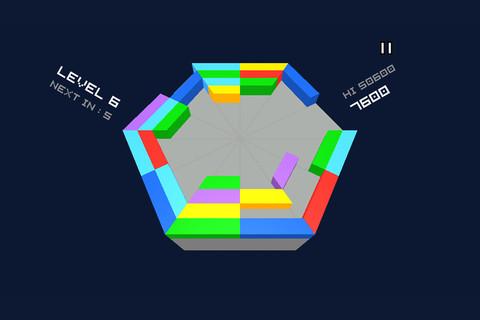 When a developer describes their game as “Super Hexagon meets Tetris“, there could only be one reaction to such an elevator pitch: “Bring it on.”

Prior Games really aren’t far off the mark either, as Rotolla truly is a combination of frantic swivelling and tactical placement. What at first appears to be a relatively simple block-dropping game soon reveals the sort of depth that the puzzle genre thrives on.

The studio behind the game has admitted that Rotolla‘s hexagon-based level design is hugely inspired by the glorious Super Hexagon, and it’s not difficult to see why. Blocks drop from the center of the hexagon and must be stacked around the edges. If you stack them too high and they reach the center, you’ve had it.

The key to staying alive is matching up like-colors. Drop a green block on another green block, for example, and they’ll both go pop. You only need to match two, and you don’t even need to drop blocks on top of others – matches will also occur simply by moving a block next to a similar-colored one. It can happen mid-drop too, giving you plenty of opportunities for popping.

There are two twists. The first is that stacked blocks don’t drop down if those below them are popped – they’ll just sort of hover in place.

And then there’s the rotating factor that plays heavily into how you go about your business, as the game’s name suggests. You won’t simply be given single blocks to play down, but rather, multiple blocks on one go. As you rotate them around, if one block gets stuck on a stack, all of the others will refuse to budge too.

The only way to release blocks from being stuck is to place the problem-block down, freeing the others such that they can then continue to rotate around the hexagon. It sounds tricky when described, so just imagine how difficult it is in the frantic heat of the moment, when you’re a second away from dumping all the blocks in the worst places possible.

But after a few goes, it all starts to click into place. You start to realize what’s important, and where you should be aiming for. You begin to understand the score combo system, and gaining higher scores moves into the forefront of your mind. It may look shallow in screenshots and videos, but there’s a huge amount of complexity to Rotolla.

The game is also hugely stylish, which is a pretty big deal given that it’s simply a hexagon with blocks filling its insides. The soundtrack is a definite hit, and being able to switch between color schemes is a nice touch too.

What Rotolla really needs is just that little something else. The main mode is great fun, but that’s all there is to it, and something along the lines of a puzzle mode in which you have to work out how to line blocks up perfectly to clear each level would have been much appreciated.

If Prior Games can build ever so slightly on what it already has here, Rotolla could very well be a must-have mobile title. As it stands, it’s still very much worth grabbing, especially if you’re a puzzle fanatic.