Home / Reviews / Romans In My Carpet! Review: Watch Your Step

Romans In My Carpet! Review: Watch Your Step 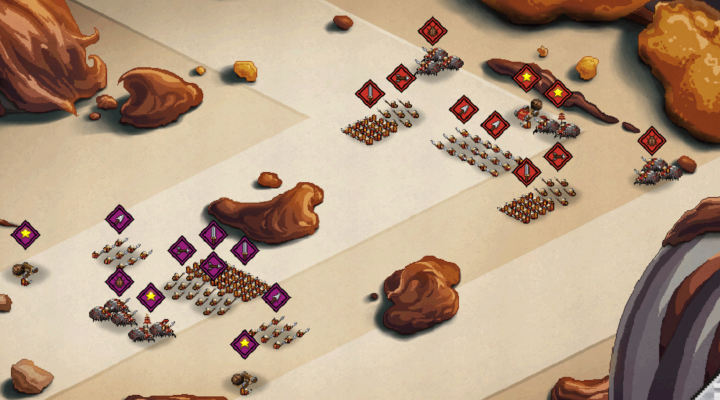 Strategic battles that are simple to grasp yet still require thought and planning.

Fun story and retro graphics are both plusses.

Not as long or as deep as previous Witching Hour games.

“As far as you know” is one of my favorite phrases. For instance, as far as you know, there aren’t literal armies of mites doing battle in the fibers of your carpets. Except according to Romans In My Carpet!, you’d be oh so wrong. Witching Hour Studios wants you to dive in and take control of these unusually strategic warring bugs, and as soon as you lift that veil of ignorance, you might just enjoy it.

Witching Hour knows a thing or two about turn-based war games since they’re the same team that did the well-received Ravenmark: Mercenaries last year, and before that, Ravenmark: Scourge of Estellion. Compared to those games, Romans is simpler, smaller (obviously) in scale and not as intimidating to people who might not be hardcore strategy buffs. Yet it somehow manages not to skimp on either the meat and potatoes of the gameplay or its delightfully well-realized underfoot world.

The mites in this game are obviously students of classical warfare, because why not? As such, they’ve separated themselves into two factions: the Romites (or as my son calls them, the red team) and the Breetles. They’re micro versions of the Romans and the Britons right down to their unit types, weapons and appearances — or at least as close as 16-bit-style graphics can make armed mites look.

A short tutorial introduces the interface and the essentials of command before tossing you into the single-player campaign. Each turn consists of a command phase, where orders are issued, and a battle phase, where those commands are carried out. An initiative system lets you know the exact order in which every unit will perform its action for that turn, information that will often help decide your next move.

The unit interface is basic but effective, as you simply tap on a unit’s banner and choose to have it move, chase a specific enemy unit, stand its ground or perform its special ability. One more tap can get you more stats and info on any unit or summon the Codex to get the lowdown on all of the game mechanics.

Melee troops will automatically attack enemies when they move to an adjacent space — and exert a zone of control on others trying to move past them without attacking — and missile units will do likewise once they’re in range. Mites under attack will counter-attack once per turn, but after that they get tired and can be assaulted with some impunity. A rock-paper-scissors relationship exists between infantry, polearm, cavalry (the mites ride spiders or insects, not horses) and ranged units that gives each type a two-point damage bonus over one other type. Support units, including a poop-flinging catapult you may have read about, are outside the unit wheel and do their own things.

That’s not a lot of rules to remember, but in practice, all of them are important. As was the case in Ravenmark, Witching Hour does a great job making every move feel like a crucial piece of the overall battle. You can’t waste any command because the AI is pretty smart and will make you pay.

If multiplayer is more your speed, Romans In My Carpet! supports asynchronous matches against other human opponents, which is a fancy way of saying you take turns with long times in-between. Each player gets two hours to submit their commands before forfeiting, after which you can jump in and check out the results of that turn before choosing what to do next. It’s a great system for this type of game, and you can have multiple matches going against random opponents or your Facebook friends at any given time.

Though the game does utilize the normally unpleasant combo of an upfront price to download and in-app purchases, the only things to buy in-game are banners which are purely cosmetic. The big question becomes whether or not it’s worth that first fee for a game that is unquestionably simpler and shorter than Ravenmark, especially once the novelty of fighting amidst crumbled nacho chips and the game’s pleasantly off-kilter sense of humor wear off.

Romans In My Carpet! is like a Ravenmark for people who wouldn’t usually mess with strategy games of its ilk. And if the idea of mite warfare on your rug grosses you out, remember that it’s just a game — as far as you know.

Among the Sleep Review: The Terrible Twos

TwoDots Review: Brother, can you spare a dot?