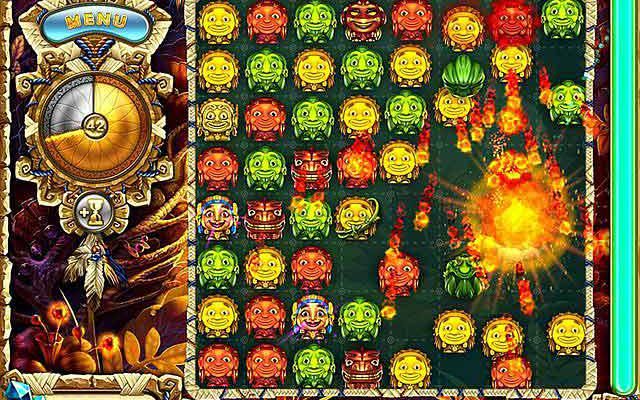 Rolling Idols is decent, but you’d be better off playing a different match-three puzzler

In a deep jungle, adorable floating idols are threatened by a purple blob-like creature that threatens to eat them all and destroy the fabric of space-time. At least, that’s what we’ve guessed is going on in Rolling Idols, as this beautiful match-three game comes with little in the way of a storyline, and is fairly hit or miss when it comes to its actual gameplay. 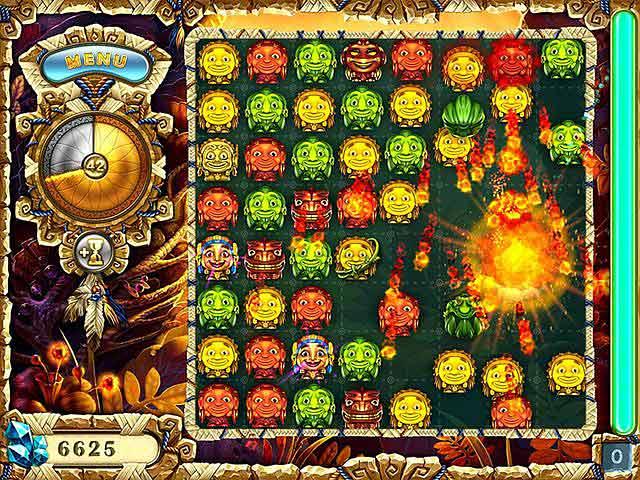 Rolling Idols lacks in-depth instructions, and instead expects the player to learn everything as they go from experience. Since the game is a match-three puzzler at its core, that at least allows you to get started in the game, but things quickly become complicated with very few instructions to clear up the confusion that’s sure to come next. Each level in Rolling Idols takes place on the same game board, as you’re asked to make matches of three or more like-colored idol heads that roll as they fall (hence the name of the game). This works well, with fluid movements of the idol pieces, but as you make larger matches, the idols begin to explode and rain down debris across the lower portions of the screen, blocking your view.

These explosions technically run smoothly, but they slow things down as they block your view of the idols behind them. Sure, these explosions last for barely a second or more, but with each level having a strict time limit, that’s precious time that you can’t afford to lose. If you’re like me, you’ll get used to the explosions after a time, but it’s impossible to ever really play the game as if they don’t exist. 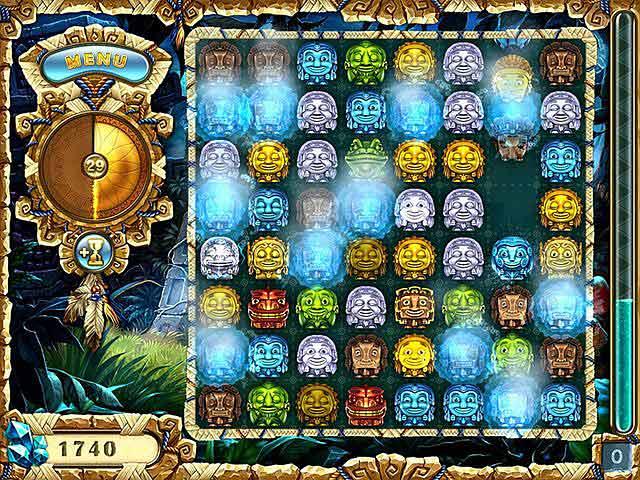 There are a variety of power-ups and obstacles that make your time in Rolling Idols more interesting. Tiles may be wrapped in vines or locked behind gates, while power-ups may allow you to explode a whole section of the board, transfer idols to other areas on the board, or control a whole row or column by sliding all of the pieces until you’ve made a match (think Chuzzle). You’ll earn currency for completing each level, and will be able to spend money on upgrades to these power-ups, making them last longer or have a greater area of impact (as examples), but these are left to mostly trial and error, as you’re given the briefest of descriptions of a power-up’s function, but will have to actually find and use one in the next level to really figure things out.

Furthermore, while many of these power-ups are color coded, they won’t be used in many of the combos that you may create as idols fall from the top of the screen. That is, a yellow power-up may be sitting next to two regular yellow idols, but they won’t explode on their own until you swap two of them horizontally or vertically. The same can be said for many groups of even regular idols, as they may be sitting in a line of three or more matching idols, but the game takes a few seconds to register this and actually remove them. This pause in the action is jarring to say the least. 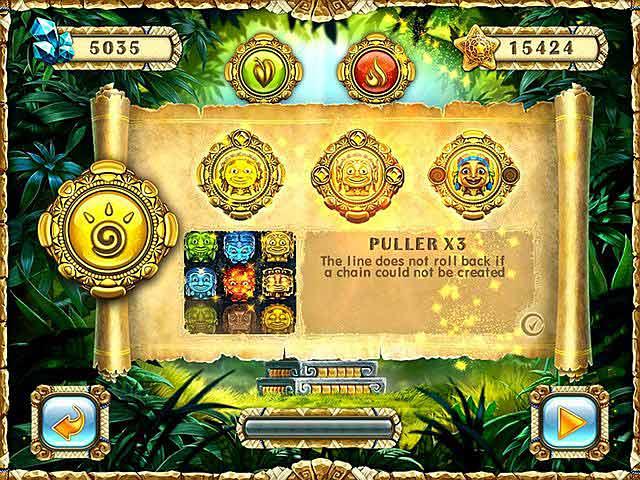 In the end, I want so much to like Rolling Idols, and say that it’s a game every match-three fan should download, but I simply can’t. The game’s lack of instructions makes power-ups confusing, and the game’s few hints at a storyline are lost just as soon as the game really begins. While the graphics here are sharp, colorful, and beautiful, and the levels are mostly easy to complete, even the game’s many power-ups can’t stop this game from being as basic as it ultimately is. Rolling Idols comes with a few really great ideas, like those upgradeable power-ups, but the execution misses the mark.