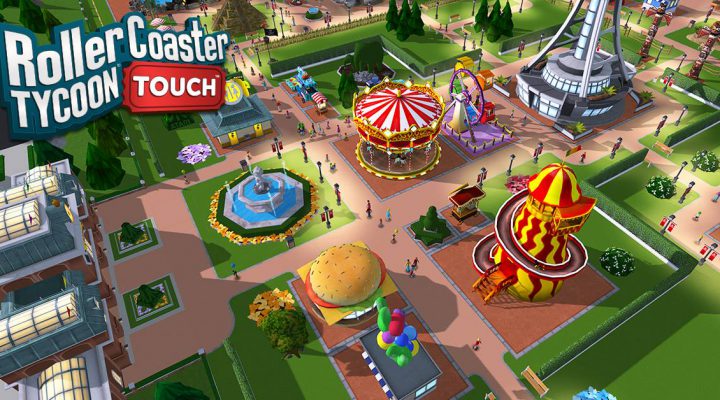 Coins are easy to spend and much slower to earn, so progress is slow unless you're willing to invest in in-app purchases.

Doesn't work on older devices (but might make an upgrade worth it).

RollerCoaster Tycoon was always meant to be played on a touchscreen. Everyone who spent their weekends hunched over their Windows PC playing the original must have mistakenly tried to adjust coaster height or place the perfect hamburger cart with their fingers at least once or twice, much to the annoyance of anyone else they shared their smudge-stained monitor with. While different versions of RollerCoaster Tycoon has been available for mobile for quite a while now, it’s never been as good as it is with RollerCoaster Tycoon Touch, the first iteration of the game that fully takes advantage of the capabilities of today’s mobile devices.

The most significant upgrade setting RollerCoaster Tycoon touch apart from its predecessors is its graphics. RollerCoaster Tycoon Touch is a far more beautiful and intricate game than RollerCoaster Tycoon World, 3 or 4 for mobile. In fact, it’s so beautiful it even makes bathrooms look pretty. Looking this good doesn’t come without a downside, however. It’s a heavy game, and if you want it to run smoothly, hopefully you’re already working with a newer device. Still, if you’re a diehard RollerCoaster Tycoon fan, this game might just be the reason to go out and get a new phone or tablet. 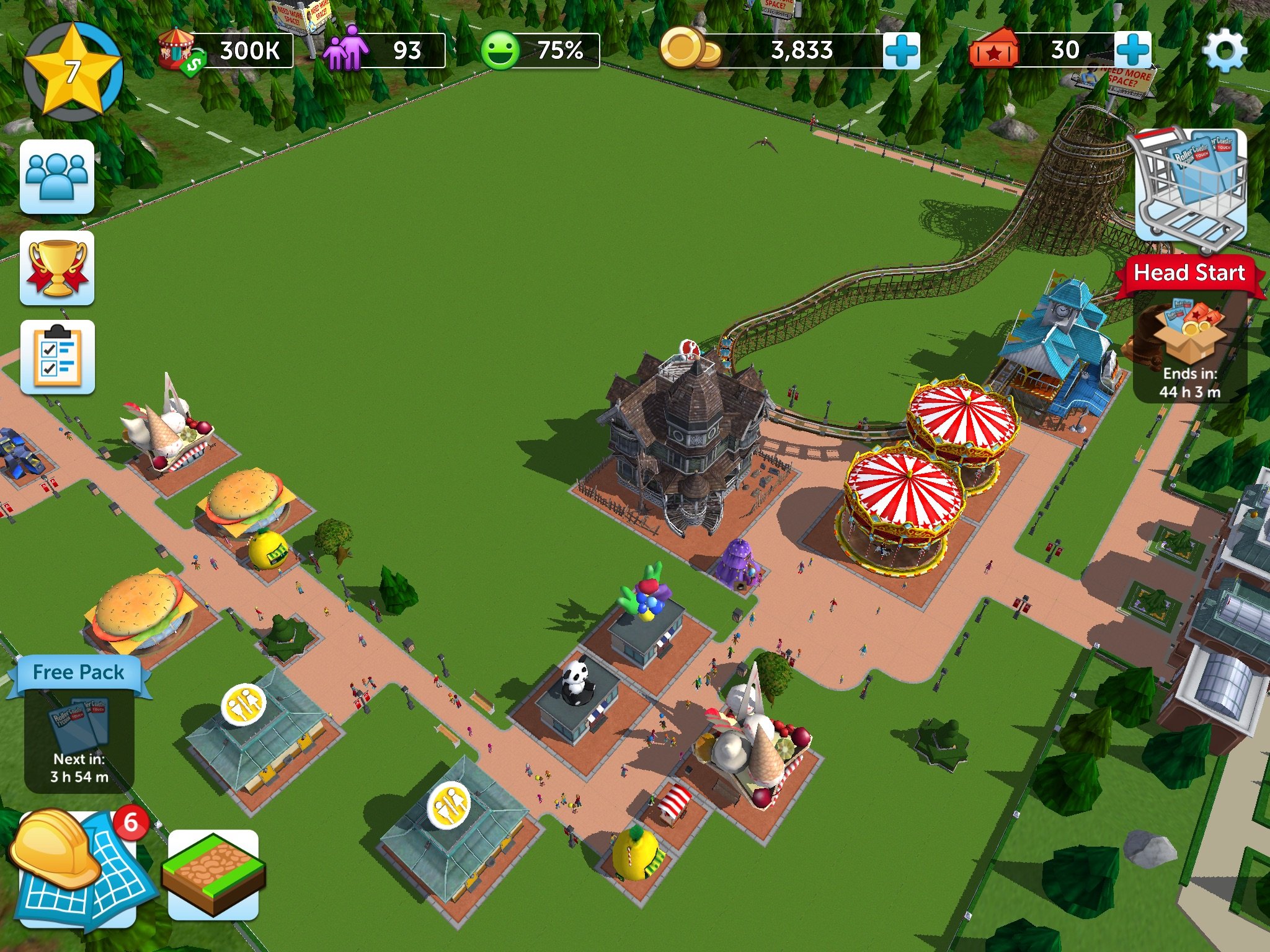 The second most significant change is the move from scenarios to challenges and card packs. RollerCoaster Tycoon Touch is very much a free-to-play mobile game in this regard. Completing challenges earns you coins, tickets and/or card packs — which are also available via in-app purchase.

Card packs are what unlock new attractions, facilities and decorative features, so getting as many different cards as possible is one of the big keys to success. Doubles are counted towards upgrades, so as frustrating as getting your twelfth joystick arcade in a row might be, it’ll pay off in the end. Tickets are used to purchase card packs in the shop, so make sure to take advantage of every opportunity you’re given to earn them.

Coins are the central in-game currency, and needed to place and upgrade attractions and facilities. Keep a close eye on your coin count because all the cards in the world won’t help you if you don’t have enough cash to do anything. The shops and attractions generate revenue to visiting the game frequently to collect is a good idea.

Another big difference with RollerCoaster Tycoon Touch is just how intuitive its touch controls are. Making a path is no longer a chore: just drag your finger across the screen to build or erase. You can even manipulate the screen as you are path building to make sure you’re not leaving any gaps. Moving a building is as simple as tapping, holding and dragging it to its new location. These perfectly sensitive touch controls make building coasters a breeze, too. For anyone who has ever struggled with closing the loop, the new coaster builder is a godsend. 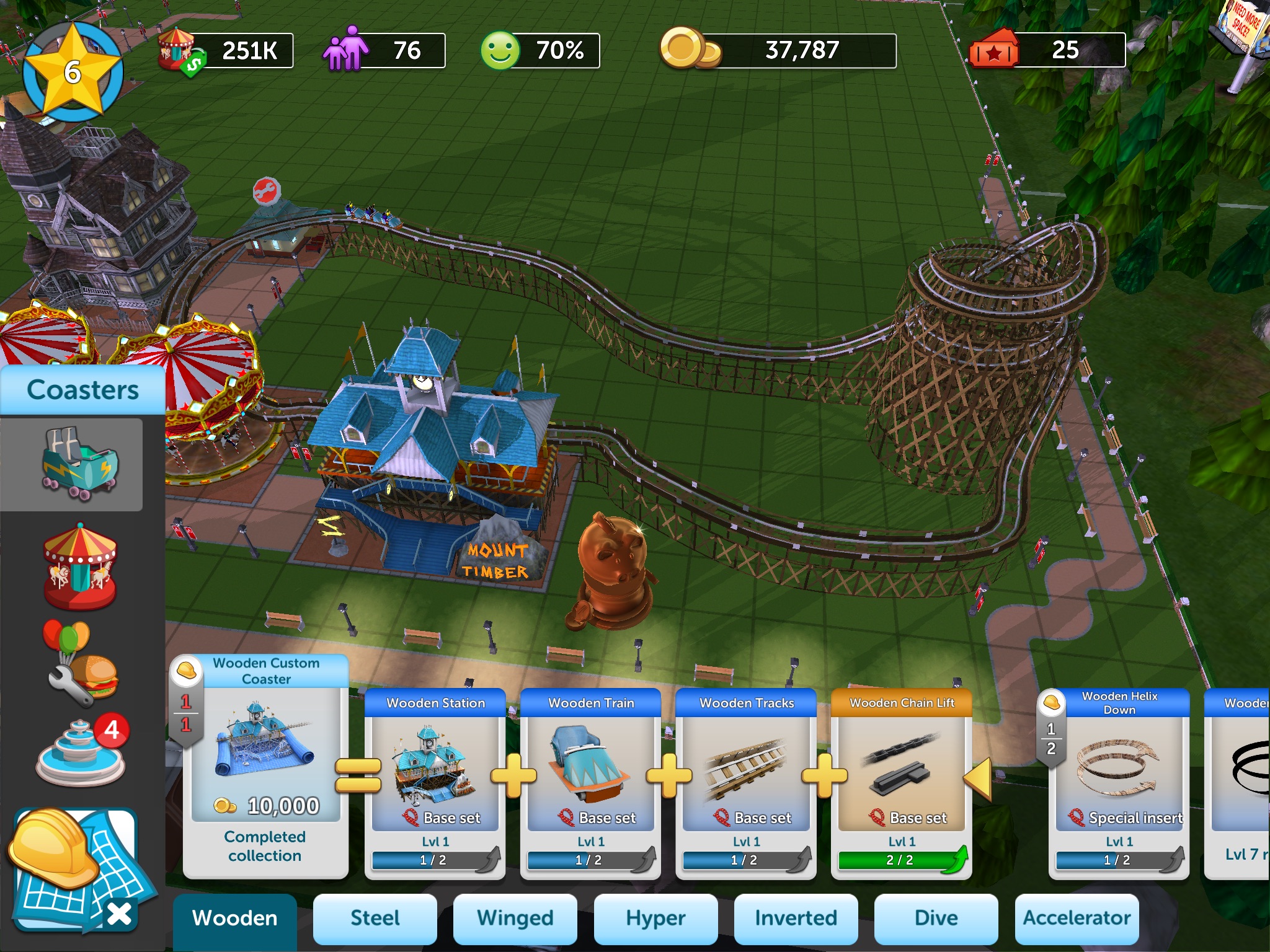