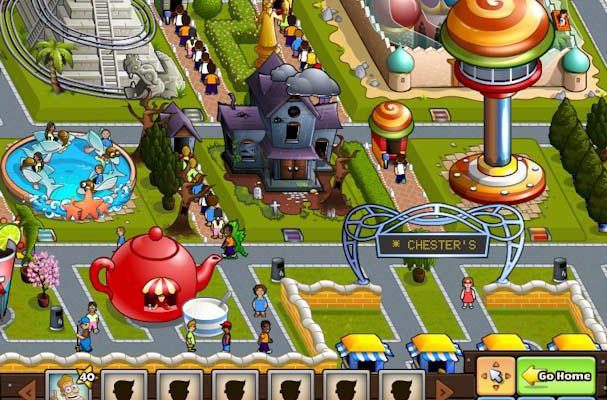 Chester, the mad showman whose loopy eyes hint that Rollercoaster Mania involves a little more than deep enthusiasm, only wants people like me to remember good things about Noisy Duck’s new social game. He even says so. Barely 15 minutes into my first gameplay session, Chester has me hunt down the reviewers busily jotting down notes so I can distract them from the less savory aspects of the amusement parks going up around them. It’s an understandable and funny task, but I can’t help but feel that I shouldn’t have to divert the attention of my journalistic brethren.

Instead, the process only draws my attention to the game’s bothersome social requirements and payment templates. Indeed, if you don’t already have a few friends playing with you, then you might find that this ride is over almost as soon as it starts. 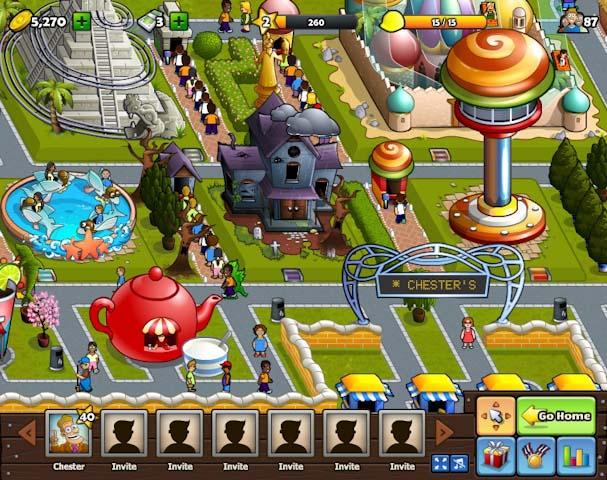 That’s partly because Rollercoaster Mania is a member of that strange tribe of social games that only lets you complete certain buildings if you have enough friends helping you out on Facebook. My ostensible goal was to build a thriving amusement park with a variety of rides (complete with the usual completion timers), but since I couldn’t any friends to play with me, my park ended up looking something like the Las Vegas Strip in the wake of the 2008 recession. Before I’d even reach the fifth level, my Haunted House became a loitering ground for aimless construction workers, my candy factory stood trapped in a prison of scaffolding, and my Montezuma’s Revenge ride towered as a crumbling monument to my misguided hubris. My only other recourse would have been to shell out around 24 Facebook credits since I couldn’t convince four of my friends to help me finish one of them. By level six, my humble amusement park was fast becoming a bemusement park.

But let’s be fair. Beyond the unwelcome friend requirements (at least for people with fickle friends), there’s really not much wrong with Rollercoaster Mania; it’s just that it feels like so many other social building sims already on the market. Its best feature, which would allow you to build a rollercoaster of your own by using tracks, isn’t even included yet. When it does appear, I have little doubt that it might include yet another friend requirement, and possibly one that will make the piddly four friends I needed to complete Monteczuma’s Revenge look like nothing. 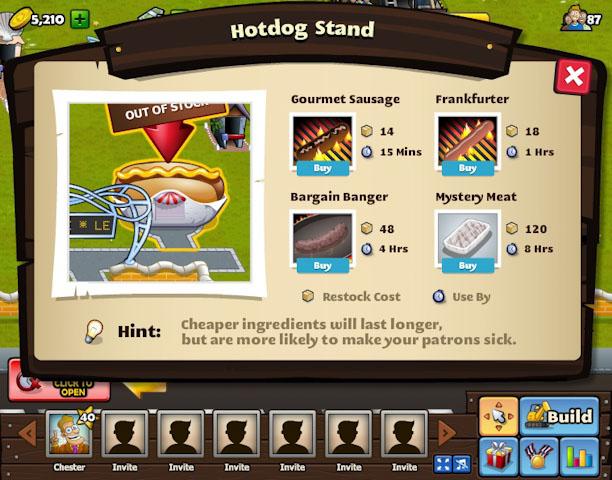 Little actions, such as keeping hotdogs stands filled with food that won’t make your customers sick, do much to maintain interest, and hiring people to walk around in dragon suits allows for some brief flashes of interest. If nothing else, it’s a little entertaining to tackle the achievements.

Rollercoaster Mania has its ups and downs–complete with a solid presentation–but whether it’s worth the price of admission depends on how much you love amusement parks and how many friends are willing to follow you into that haunted house you’re building. I know I personally won’t need a season pass.

Between the Worlds II – The Pyramid Review