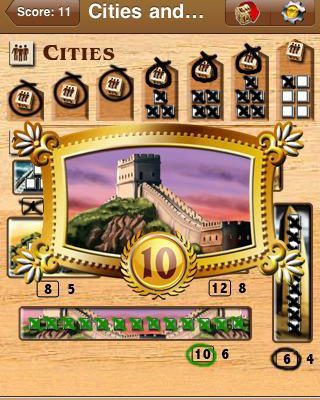 Roll Through the Ages

Roll Through the Ages is often brought up when suggesting really good board games to people. It’s so popular in fact that board game fans were incredibly excited when the iPhone version was announced. It’s finally here, and while not exactly a household name , this app has a high standard to live up to. Luckily I can report that the iPhone version has no problem reaching this high watermark.

Roll Through the Ages is a dice game where players roll for food, workers and commodities to try and build up their respective civilizations. You need to collect workers to build cities, but the more people you have the more food you need to keep them healthy. You need to generate goods to improve the lives of your people, or sell when times are tough. It’s a balancing act with a bit of randomness thrown in on account of the dice. 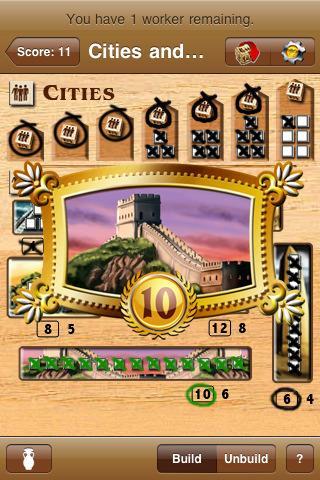 I’ve had my eye on the board game version for quite some time, but until now haven’t pulled the trigger on buying it. Having never played that version of Roll Through the Ages before I can’t really comment on how well the iPhone version lives up to it’s real world companion, but it certainly feels like a board game ported to the iPhone (which is a good thing.)

Roll Through the Ages is a versatile game since each player is working on their own city and there’s no sharing of resources or even a communal board to play on. In the analog version you’re limited by the bits the game came with, but that’s not a limitation on the digital version. It’s a game you can play alone (for high score) or play with as many people as you can find, each taking turns with the same iPhone. The game can handle in excess of 20 players, however it’s all local though. There’s are no network play options.

The game takes place over the course of 10 rounds, and obviously the more players you have the longer it takes. As a single or two player game you can expect each game to take about 20 minutes. While it’s quite simple to get the hang of things, the game offers some pretty deep strategy with the need to balance workers, food and resources. Because of the dice the outcome is always up in the air and helps to make the game fun time after time.

The game has two issues worth mentioning. First and foremost is the lack of an AI player option. One of the really nice aspects of board games being translated to the iPhone is the assurance that you’ll always have a willing opponent. It’s what makes games like Hive and Zooloretto so appealing; I’ll never be stuck unable to play for lack of people to play with. By not including AI, you take away one of the huge advantages iPhone board games have over the real deal. I’m really hoping this will be patched in at some point soon. 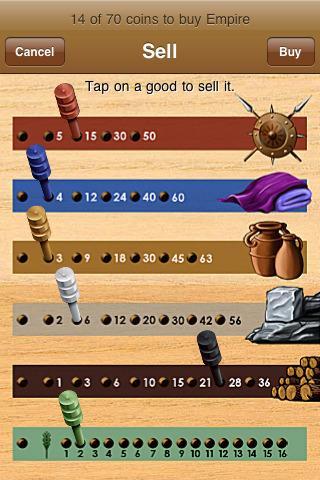 The other issue I had with Roll Through the Ages was the lack of a tutorial of any kind, and relegating the rules to a text page you can scroll through. If you know your way around the game this won’t be an issue, but for people like me that had never seen it before it was strange to have zero assistance in learning the game. Luckily though Roll Through the Ages is quite simple to pick up and understand, and I fully understood what was going on by my second game.

Thankfully these problems don’t really drag the experience down all that much. The AI is a bummer, but will hopefully be fixed, and while a tutorial would be nice the game is pretty easy to pick up so it’s a temporary problem. I would heartily recommend the game to anyone that enjoys dice or board games. From a gameplay perspective it’s top notch, and the only thing I can knock it for is the lack of an AI opponent. Fix that and you’ve got a 5 star game on your hands.

PuppetShow: Souls of the Innocent Review