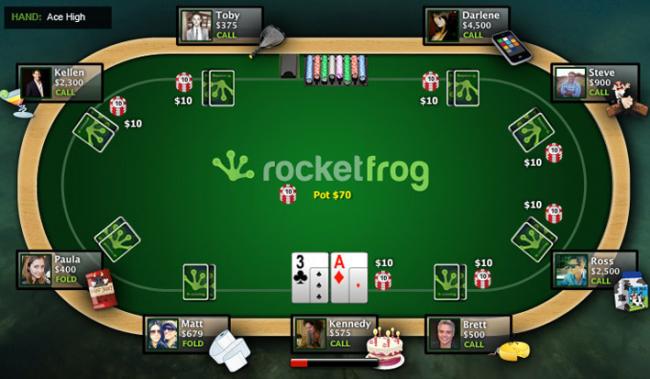 Facebook casino games finally get a taste of real prizes

Brody Jenner might be best known for being the son of Bruce Jenner, dating Avril Lavigne for a couple of years, or for starring on a reality show where guys competed for the right to be his best friend. His new project, RocketFrog, sounds a little more promising: a Facebook casino sim where people can play for free, but compete in poker, blackjack and slots tournaments for real prizes.

Ever since “Black Friday” effectively shut down real money online poker in the U.S. last year, there’s been a void that no one has effectively filled. The team behind RocketFrog is hoping its app can entice players who “could not fathom the idea of playing for nothing” by luring them with gift cards and other swag provided by various corporate sponsors.

It might just work. Tournament play for prizes is the big attraction here, giving players a chance to win something nice – during the time this reviewer spent with the game, it was $50 gift cards from shoe company Creative Recreation. The lobby queues you for the game of your choice with just one click, starting tournaments as soon as the tables are full. Wait times are short, and the events play out quickly.

Sadly, tournament play is limited to just seven hours a day for now. And since only one company at a time is giving out prizes, it’s not hard to imagine people logging on to check what’s being given away and immediately bouncing if it’s something they don’t like.

During non-tournament time, RocketFrog is a thorough, if not especially thrilling play money casino sim. There’s a solid array of games, including poker, blackjack, roulette, slots and multiple variations of video poker. None stand out from those offered by more dedicated, single-game apps (the slots, in particular, are pretty bland), but the variety is welcome. Daily chip bonuses are generous, with even larger amounts available if you can convince some of your Facebook friends to play. 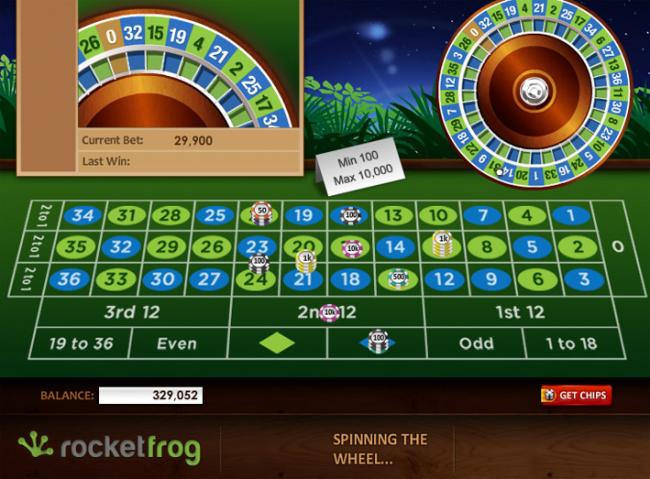 Social features are also a big focus thanks to chat windows, leaderboards and plenty of achievements to be shared. Gifts can be sent and requested like in many Facebook games, but they can also be given during games. So if you want to act like a virtual high roller and buy a bottle of champagne for everyone at your blackjack table, it’s easy to do. Decorative items stay with you and can be displayed next to your avatar as you see fit.

The titular RocketFrog is also surprisingly well-versed in the rules of the games he offers for an amphibian strapped into a jet pack. Drop-down menus offer complete overviews, as well as “Tips From the Pros” that would be wise to follow when gambling in real money casinos.

All of this would be great if it worked reliably and was packaged attractively. For the time being, that’s not always the case. The app has a tendency to be buggy, with players getting frozen out of tournaments and regular games failing to load. 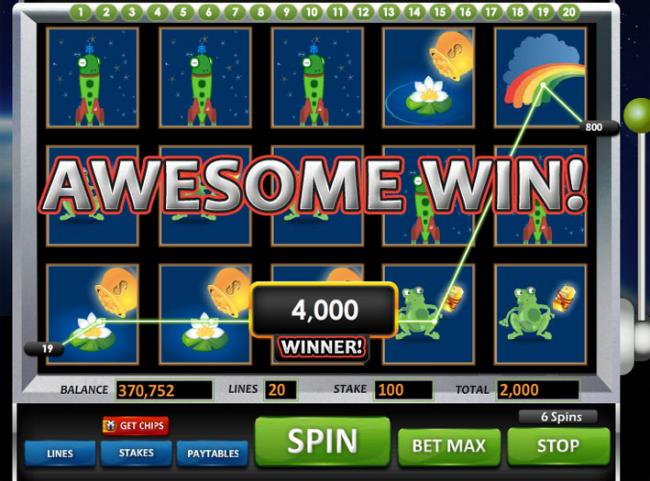 It’s also hard to escape the heavy-handed advertising. A game like this couldn’t exist without its partners, and I happen to like Creative Recreation’s shoes. But should I really have to watch a 30-second commercial before each tourney, see their products as slot reel symbols, and “Like” the company’s Facebook page just to play? It seems like a bit much.

There’s no shame in aiming high, and RocketFrog is definitely doing that by trying to bring something different to the Facebook casino space. Prize-based play has a lot of potential, even if and when real money play becomes a reality, and Jenner and company can be the trailblazers once they smooth out their game’s rough edges.