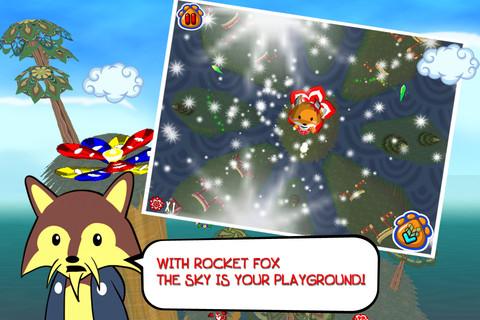 It’s becoming more and more common for major console game developers to give iOS a try. The end result of that, however, can be hit or miss. Some developers think that it’s easy to make games for such a simple system, and crank out low-quality releases that are far from the high watermark of the company’s well-known titles. Others learn that iOS is an entirely different animal, and learn to make quality games from the ground up for the system. NamcoBandai’s Rocket Fox is a result of the latter.

In Rocket Fox, you follow Guy, a rocketeer apprentice from the mythical Inari Shrines. Your species contains a unique trait that allows you to ignite the mysterious flowerockets, creating fantastic pyrotechnics displays in the process. However, when Guy and his friends decide to go for a little after-hours fireworks fun, things start to go a little awry.

The best way to conceptualize the way Rocket Fox performs is by imagining that a skydiver has dozens of high-powered trampolines below them. You begin by free falling through the air from a top-down perspective, looking at the ground. By re-orienting yourself with the iOS accelerometer, you guide Guy as he bounces off each flower.

Rocket Fox employs a cell-shaded graphical filter, creating a crisp and gorgeous 3D/2D style. Like previous masters of this style, such as The Legend of Zelda: Wind Waker and the Katamari franchise, we find the display is perfect for bright, high-contrast colors. In a game about setting off fireworks over sweeping landscapes, it’s a perfect touch.

As if the graphics weren’t colorful enough, collected in-game currency (dubbed foxfire) allows you to brighten your game with new explosions (both shapes and colors) and costumes. Do you want your fireworks to go off looking like a smiley face? A four-leaf clover? It can be done. Do you want a traffic cone on your head? A giant Pringles man mustache? That’s a possibility, too.

Foxfire is accumulated pretty quickly by tapping the screen during each of your runs, and it’s a pretty flexible currency, too. On top of all the aesthetic changes, you can also purchase single-stage powerups for your runs, such as increased control, bigger flowers, or straight-up skipping a stage altogether. We never found the powerups necessary, but the possibility exists if you need it.

Different colored flowers allow for higher and lower bounces. Yellow and silver flowers send Guy high into the air, allowing you plenty of time to plan your next landing. Black and red flowers? Not so much. Some flowers set off chain reactions that ignite other flowers.

Our personal favorite is a unique bud that fires you horizontally instead of bouncing you upward. Once hit, the flower redirects your view to a traditional 3rd person perspective, and you control the rocket like you would a car in a racing game. These rockets are just one of many unique twists that you’ll encounter over your adventure.

There are several different types of win conditions for each stage, and that’s a large part of what keeps gameplay from getting stale. Some stages might require you to ignite every flower on the board. Others might require you to hit a giant “finale” flower. Or maybe you’ll have to fly through all the courses hoops. Or maybe you’ll have to destroy all the enemy tanks.

You heard that right. Tanks. Needless to say, Rocket Fox does a lot to keep each of its 60+ stages unique in some form or another. 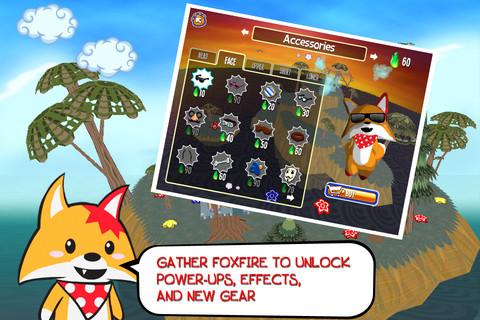 The only time where Rocket Fox‘s high-flying adventure falls short is on the “order of operations” type levels. Some stages require you to hit specific flowers in the correct order, where hitting a single flower out of place will result in a failed run.

The puzzles usually aren’t too tough to determine, but when you’re flying at max speed out of the air, things can be a little tougher. Rocket Fox‘s absolute strength is the fun in trying to accurately land on flowers with skill and reflexes, and these occasional obstacles tend to distract from that formula more than they add.

The other issue is simply that this isn’t a traditional handheld game. You can’t cuddle up to a pillow while playing, and you certainly can’t be lying down. Because the top-down perspective requires you to keep your screen facing the air, you can only play the game while sitting up and looking down. After a very long play session, your wrist or neck might feel a little bit sore. Then again, kudos to NamcoBandai for making a game that inspired our long play sessions in the first place!

Rocket Fox soars above the traditional iOS release, and it’s well worth a try. The first chapter of stages are free, and if you find yourself enjoying those stages even slightly, we highly encourage the in-app purchase to unlock the full game. There are a ridiculous amount of gameplay quirks and twists to keep you engaged from start to finish.