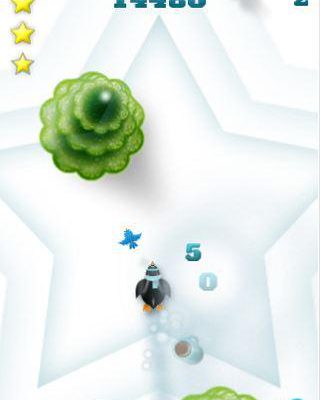 Just in time for the Winter Olympics to end, Rocket Downhill Penguin slides in to the finish line. But due to wonky controls and other issues, it doesn’t make the podium.

Rocket Downhill Penguin is a very simple game to play. Your penguin slides towards the top of the screen, and all you have to do is tilt your iPhone or iPod Touch to steer him clear of obstacles on the randomly-generated courses and into items that give you points or health. As you slam into obstacles, your health bar drops. Whack yourself too many times and it’s game over.

However some of these obstacles reveal items that are worth lots of points! Whamming into a big tree causes little bluebirds to fly out. If you can tap one with your finger before it disappears it’s worth big points. Similarly, if you slalom into a snowman, his hat falls off and it’s worth points too. 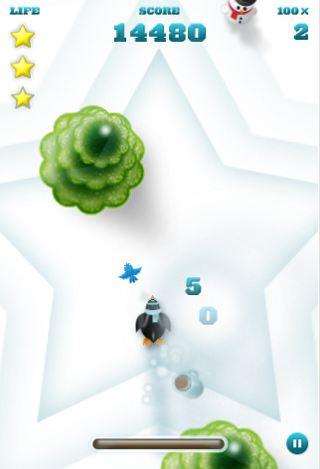 It’s all very simple and great for a short pick-up play session. With the levels being made randomly each time, you’ll never play the same course twice. But the execution of the product prevents Rocket Downhill Penguin from getting past the opening heats.

The graphics are simple and easy to see. While there is one tune that constantly plays when navigating screens in the game, it can be mercifully disabled. Otherwise this tune will loop non-stop and make you want to smack into a snowman yourself.

Your poor penguin will be fisticuffing Frosty more often that you’d like because the controls here are clumsy. When tilting there is a definite “dead zone,” where tilting ever-so-slightly yields absolutely nothing, but when you tilt just a hair further the penguin screams to the side of the screen. There is no subtlety here, which proves difficult as the obstacles move faster. There is no option for control sensitivity either.

In fact, the options here are positively barren. Other than turning the music on or off (again, you’ll turn it off) and seeing the credits, there is nothing else to bother with in Rocket Downhill Penguin. There is only one mode of play without any achievements or unlockables. If there weren’t Facebook Connect integration for posting your high scores for your friends, there wouldn’t be anything at all.

The course variety, too, shares this emptiness. There are literally two obstacles to avoid: enormous trees and snowmen. It gets old fast. There aren’t even any power-ups that affect the gameplay, outside of collecting three star icons for a short burst of invincibility. It’s too boring.

There really isn’t much else to say for Rocket Downhill Penguin. It’s a simple game that isn’t compelling enough for repeat visits. It lacks the charm of Rat on a Scooter in terms of forward-momentum gameplay, and the controls render it wonky and difficult. Try as he might, Rocket Downhill Penguin isn’t destined for golden glory.