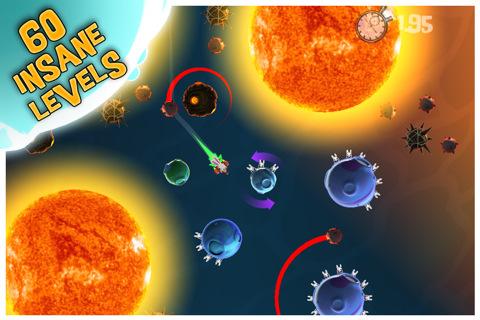 Rocket Bunnies runs circles around planets, as well as the competition

Rare are the games that can turn the act of making the player feel like they’re running around in circles into an art form. All too often, simple ideas that show much promise melt away when things begin to heat up. Scores of games play out like broken records, treading the same path from beginning to end and leaving players tired, bored and exasperated in equal measure as a result. Thankfully, Rocket Bunnies‘ revolutions are less to do with any sense of repetition, and more the result of the game, quite physically, sending you spinning from start to finish.

It’s an idea as bizarre as it is brilliant, but crucially has all the hallmarks of Chillingo’s best: taking a simple idea and letting it slowly flourish into something spectacular.

Said bizarre element is what’s most apparent to begin with, however. Rocket Bunnies operates in a universe where rabbits run rings around planets to deliver food for the rest of their pack. Wisely, there’s no attempt to follow the line when it comes to scale here, with most of the worlds on offer smaller than a three-cent piece.

Once activated, your rabbit will run endlessly around a planet he finds himself on, only flying to any neighbouring worlds when prompted with a tap of your finger. The idea is to visit all the planets playing host to bunnies in order to drop off an endless supply of carrots, but to do so, traversing almost every world in each solar system, populated or not, is a necessity.

In truth, it’s much like crossing a river by leaping from stone to stone rather than attempting to leap from one side to the other.

The trick is to try and visit each planet on your check list in the most efficient manner possible, with Rocket Bunnies rewarding up to three stars for levels completed in quick time. This means, as well as deciphering what the best route is in the first place, you also have to time your dash from one planet to another perfectly, waiting until the bunny’s run is lined up with his next destination in order to earn a much needed speed boost.

In the first few batch of levels, making your way from planet to planet is all the matters. As play builds, however, merely surviving to fight another day is just as prevalent an issue.

That’s because, one by one, Rocket Bunnies begins to introduce elements that are out to get you. Planets are frequently orbited by bombs that wipe you out on contact, while space spiders also soon begin to track you down, following your route like missiles. 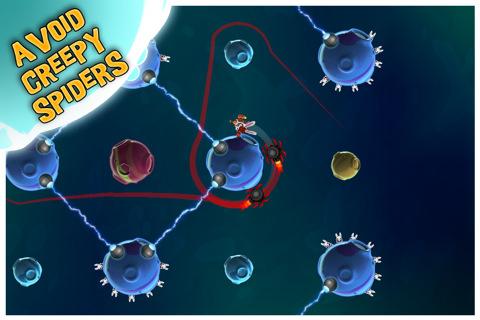 There’s undoubtedly a knack to avoiding their attentions (if you plot your path correctly, you can actually wipe them all out in one fell swoop, causing them to collide with one another), but Rocket Bunnies wisely avoids getting caught up in any sense of strategy – though by no means easy, this is a game to savour rather than study.

Indeed, though Rocket Bunnies isn’t perfect – given said spiders rarely seem to follow the same path from one attempt to another, it’s sometimes difficult to rectify any mistakes you make with a second or third run – there’s much to celebrate here.

Namely, the game’s ability to build on its simple style without overcomplicating affairs. Rocket Bunnies is never dull, and never lets you lower your guard for a second – but by the same token, it never makes playing a painful process, either. The ability to strike such a balance shouldn’t be underestimated, and Rocket Bunnies is a game most certainly worth having on rotation.