By Harry Slater | 4 weeks ago 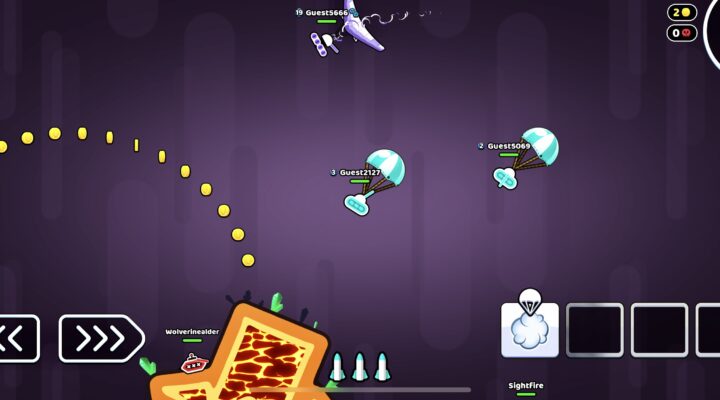 Gets grindy too quick

Can feel a little unfair

Balance feels a little off

Rocket Bot Royale takes ideas from a bunch of different genres and blends them together to make a primary-hued rocket blasting 2D battle royale that shines and frustrates in equal measure. When it’s good it’s really good, but it can sometimes feel a little bit unfair.

The game sees you playing as a tank and parachuting into a level made up of floating islands. You can jump between those islands and drive around their edges, using your cannon to leap. They’re also falling into the sea – and if you do the same you’re going to die.

There are 34 other tanks trying to be the last tank standing, blasting out rocket fire, mines and nukes to achieve that aim. There are weapon-drops in the form of crates, and you can spend coins to beef up your vehicle with a selection of perks and extra firepower at the start of every battle.

You get a thin stream of currency as you fight, but the big rewards are reserved for the winners. Which means they’re going to have the cash to spend to be tougher next time round. That sparks a pretty clear imbalance – losers are scrabbling to catch up all the time.

And because you have to spend coins every fight to use a new weapon or perk, you can fail a couple of times and be completely broke until you grind up enough cash to add something extra. There are times when you’ll get lucky and survive long enough to earn more, but being lucky isn’t a great base to build a game on.

Rocket Bot Royale’s battles are short and sharp, even when you get deeper into them, but sometimes they can be over in a matter of seconds if you land in the wrong place and catch a volley of fire. Or jump wrong and end up in the sea.

The balance here just feels skewed. And instead of enjoying the carnage you’re left to raise your eyebrows and fume at how you never seem to catch a break. Sometimes things click and you get a glimpse at just how exciting the game could be, but then you catch a rocket to the tank face and the sourness sinks back in.

Rocket Bot Royale oscillates between cheery carnage and grumpy defeat. It’s too stingy with its cash and even when you’ve got some you might spend it in vain. There’s a great game trying to push out through all of these niggles, but unless you’re willing to really grind through them it’s unlikely you’re going to find it.

Kirby and the Forgotten Land [Switch] Review – This Doesn’t Suck