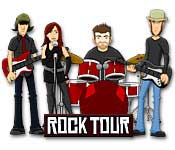 Behind every great band is a great manager. Even though it’s not half as glamorous as actually being on stage, without a manager there would be no one to book the shows, advertise, stroke fragile rock egos, and of course ensure a steady cash flow. This is the role you’ll step into in the strategy game Rock Tour.

In Rock Tour you’ll choose one of five different up-and-coming bands to manage – three of which have to be unlocked. The band will start small, playing local gigs with tiny audiences, but will slowly gain fans and enough acclaim to move to bigger and better venues. That is, if you can keep everything together.

There’s a whole lot to juggle in the game. First, you’ll have to book the band a steady stream of shows for them to earn money and fans, which is done by clicking the star icons that appear on a map. From there, you can select which songs the band performs, set a ticket price, and decide whether to invest in advertising to potentially increase the audience turnout.

But all will be for nothing if the band doesn’t put on a good show, and it’s also up to you to make sure that this happens. You can click on any of the five band members to make them practice their instrument to increase their skill level, or to rehearse particular songs. You can visit the shop to buy better instruments and more bombastic props to improve the band’s image, or surf over to the band’s message board to see what the public is saying about them.

Your band will write new songs occasionally, and you can record these to make a CD to bring in additional revenue. At high profile shows, you can even watch the band perform their signature song. You start out as wannabees, but as you garner more fame you’ll move up the ranks, and your small local map will expand to include the entire state and eventually neighboring states as well as your fanbase grows to neighboring cities.

Each band you manage has its own members with unique personalities, a storyline of sorts, and a goal to work towards, which might include getting a certain number of fans, or achieving a certain band star rating.

Rock Tour is a very thorough game that leaves almost no stone unturned in tapping into the business of rock n’ roll, but in a way that’s one of the game’s major foibles as well – it’s just too complicated. The 49-part tutorial burdens the player with an overwhelming amount of information right at the start of the game instead of pacing it out and allowing the player to learn by doing, which is something that other no less complicated strategy games, most notably Build-a-lot, have mastered. If you forget how to do something – and you will unless you were taking notes – you’ll have to wade through verbose help files to try to find the answer.

Then there’s the fact that there doesn’t seem to be a great deal of forward momentum in the game. The story, such that it is, is simply bits and pieces of dialogue that play out occasionally between band members. It seems to take forever for band members’ skills to go up, partially because they can’t go for very long without getting tired and needing to "chill" for a while to recover.

The interface could have been a bit smoother as well. In every tab, the command to close is in a different place and font, which is disorienting. And when the map zooms out it can get hard to see individual stars and possible to miss some if your band bus is covering it. Once zoomed out, there’s no obvious way of zooming back in, either.

To Rock Tour‘s credit, it has a very strong rock soundtrack (we would expect no less from a music-themed game), and the attention to detail is commendable – we especially liked the fake website forum. Strategy game fans could certainly do worse, but then again, they could do better too.