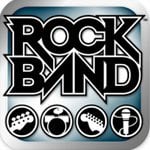 When it comes to mashing up music and video games, there are few names bigger than Rock Band. With nearly a dozen iterations under their belt (everything from Lego: Rock Band to The Beatles: Rock Band came out in 2009) it was only a matter of time until the popular franchise went portable. And while they've already made an attempt to get in people's pockets with the PSP release Rock Band Unplugged, it took the iPhone's touch sensitive gameplay to pull out a win for handheld rock fanatics everywhere.

The gameplay here will be instantly familiar to anyone who's played Rock Band or Guitar Hero before. Just like every other version of Rock Band, you'll need to tap different tracks as notes come down the pipeline in rhythm with the song. The longer you go without missing a note, the higher your score multiplier becomes. Perform well enough and you'll be able to double your multiplier by quickly tilting your iPhone forward and activating “overdrive.”

But these controls, while easy to learn, can be found in countless rhythm games. What sets the Rock Band series apart from its predecessors is that ability to select from a variety of instruments, each with its own note tracking that mimics what each instrument is performing in the actual song. Bringing that multi-instrument experience to the iPhone is a nearly insurmountable challenge, and they've pulled it off successfully, albeit with slightly mixed results.

One the one hand they've created a fantastic local multiplayer experience for you and your other iPhone-toting friends that does an amazing job of replicating that original Rock Band living room experience. Each device will sync to the same song via wifi or Bluetooth, with each of you picking your own instrument to jam on. It's a bold concept, but it's executed flawlessly.

On the other hand, so much of what made each instrument unique has been stripped away to accommodate the iPhone. Ignoring the fact that the fake plastic instruments aren't even a part of the mix, little touches like the kick pedal and whammy bar concepts didn't make the cut in the portable build. This means that, of the four instruments, three offer identical gameplay outside of the different note-tracking. Guitar, bass, and drum gameplay are indistinguishable from one another. And that fourth instrument? That was the biggest disappointment of all.

As a closet karaoke fanatic, nothing makes me happier when playing the traditional home version of Rock Band than belting out a few tunes. With its built in mic the iPhone seemed like the perfect place to tackle vocal tracks on the go. Of course that's only my opinion, and it would seem my opinion and the opinion of the game's developers differs slightly. While there is a vocal track option in Rock Band, there's no opportunity for you to actually sing. Instead vocals have been replaced by – you guessed it – another 4 track tapping game. That's not to say it's bad – if anything the vertical take on the Rock Band formula is probably the highlight of the app – but it's hard to ignore the fact that this is one of the biggest missed opportunities in the history of gaming.

The game ships with 20 songs that tickle a wide range of genres. Everything from “We Got the Beat” to 30 Seconds to Mars made the cut, and it's all rockin'. If there's anything you're not intimately familiar with already, don't worry – every track feels like a perfect fit for Rock Band, and the note tracking is just as tight as you've come to expect from the home console versions.

While the note tracking is tight, the design of the iPhone version has one major weakness that will make or break this release for a good deal of the population: managing four tracks is a challenge with big fingers.

I'm not going to start making horrendously inappropriate claims like “Rock Band isn't for fat people,” but if you happen to have large fingers the flaw in Rock Band's portable design becomes strikingly apparent. Whenever there are two notes coming down the pipeline side-by-side, there's an incredibly good chance that you're going to accidentally spill over into a neighboring note. It's not a major issue, and it's not going to happen every time – but you you're hands are the kind that can crack a coconut raw, expect to see more than a few good combos wrecked by poor design.

Rock Band also offers an in-game music store for additional song purchases, but the selection is more than a little disappointing. We love that you can snag tunes from bands like Freezepop and Weezer, but with only 9 different 2-song track packs to select from there's simply not enough here to really get excited about. At 99 cents a pack (and in some cases, free) the pricing is more than fair, but we'd have just liked to see a better selection. The music store for the console versions is currently sitting at more than 1000 songs – why the portable version couldn't tap into the existing store I'll never know. Maybe it's licensing issues. Maybe it's due to the slight tweaks made to the instruments. Whatever it is, it's a major disappointment.

It's not often that a game can balance tremendous fun with exceptional flaws and still come out a winner, but Rock Band still manages to pull it off. Regardless of our concerns regarding fat fingers, voiceless vocals, and stripped-down shopping, Rock Band captures the spirit, essence and fun of it's console counterparts. It's a shame that they didn't adopt the 3-track gameplay of Tap Tap Revenge, but then again, that just wouldn't have been Rock Band.