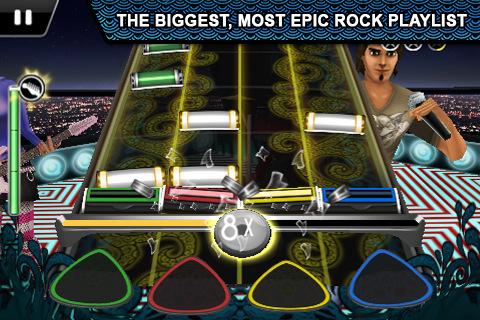 Last year’s attempt to bring the Rock Band franchise to the iPhone was bittersweet at best. While a competent mobile rocker, Rock Band for the iPhone lacked a number of features we’d hoped for, and it failed to learn from the successes of its competition. Rock Band Reloaded manages to fix all of that, delivering an outstanding mobile performance that addresses seemingly every issue we had with the original.

The Rock Band franchise is as well known as sliced bread at this point, but in case you’ve been living under a rock for the last few years let me get you up to speed: players select from one of four instruments and then tap along to notes that scroll along the screen as they listen to some legendary rock tracks. The more notes they hit, the better they perform. It’s as simple as that.

One of the biggest and most noticeable improvements over last year’s iPhone entry is that, rather than playing in portrait mode, the game now uses the iPhone’s landscape orientation. It may not sound like much but as anyone with thick fingers will tell you, squeezing four different note tracks into portrait mode made it something of a challenge to hit the right note without spilling into the next track. By switching to landscape, every note track now has more than enough space.

Other little enhancements dot the landscape, like the addition of an expert mode and Retina Display enhanced graphics, though the basic staples of Rock Band remain largely the same. Players can compete in a World Tour Mode, just jump into a quick play session, and even jam out with other friends locally via WiFi and Bluetooth.

Still – that’s not to say there aren’t other big improvements. In fact, the biggest addition to Rock Band Reloaded addresses our #1 request from the previous game: it lets us sing.

Using the iPhone’s microphone, players have the option of belting out tunes using their own voice just like in the home console version or sticking to the tappable play of the other instruments. The note tracking here is accurate, though it’s also somewhat forgiving. My own vocal skills are closer to a tone deaf moose than the lyrical stylings of Simon Le Bon, but Reloaded seemed willing to recognize the effort as much as the accuracy while tackling Hungry Like the Wolf. It might make you feel silly to sing to yourself on the bus, but so long as you find an appropriate setting, the experience here is just as much fun as in Rock Band‘s home console versions. 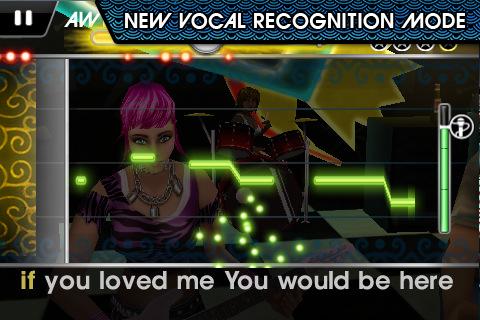 Not every entry on our mobile Rock Band wishlist gets a big checkmark, though. As much as we enjoyed the 20 included songs (Nirvana, Steve Miller Band, Vampire Weekend – what’s not to love?) we were a little disappointed to find that Rock Band Reloaded still didn’t connect to the real Rock Band music store for additional purchases. With over 2000 songs and counting, the Rock Band store could have provided endless opportunities for rock enjoyment. Instead, players are limited to a 16 song (and growing) mobile store, featuring two-packs exclusively – most of which are free downloads from indie bands you’ve never heard of.

In addition to all of the new features, Electronic Arts has also released an iPad version of the game, Rock Band Reloaded for iPad. While a largely similar experience, a few noticeable tweaks have been made to cater to the unique size of the device – namely, the ability to play the game in portrait mode as well as landscape. As much as landscape is appreciated on the iPhone, being stuck with that on the iPad is a terrifying notion, and it’s one that EA thankfully saw fit to address. 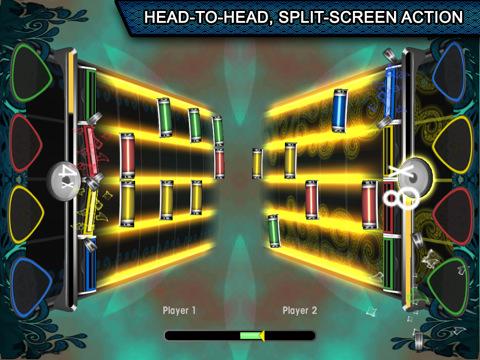 The iPad version also features a neat head-to-head multiplayer mode that’s both a blast to play and eerily reminiscent of the multiplayer in Tap Tap Revenge, as well as a “big drums” set up. Other nice additions, like the ability to build a customized set list or jump right into another song via the “encore” feature, are inexplicably missing from the iPhone version.

Nightmare on the Pacific Review