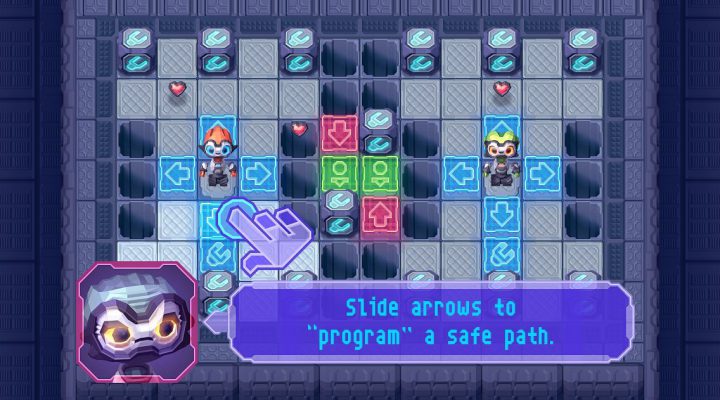 The game's gender politics are inclusive in a way that's clear yet still subtle.

Robots Need Love Too is perhaps the perfect metaphor for the way that gaming has changed over the last few years. The game is created by Elephant Mouse, a studio formerly known as Villain. Villain made the game Archetype, a first-person shooter for mobile that eschewed IAP, partially as a reaction to Ngmoco’s Eliminate, one of the earliest IAP-driven games on the App Store.

Now, the studio has rebranded, makes mostly casual games, and has just released a colorful free-to-play puzzle game about robots in love, with six different gender pronouns that can be used for the robots. 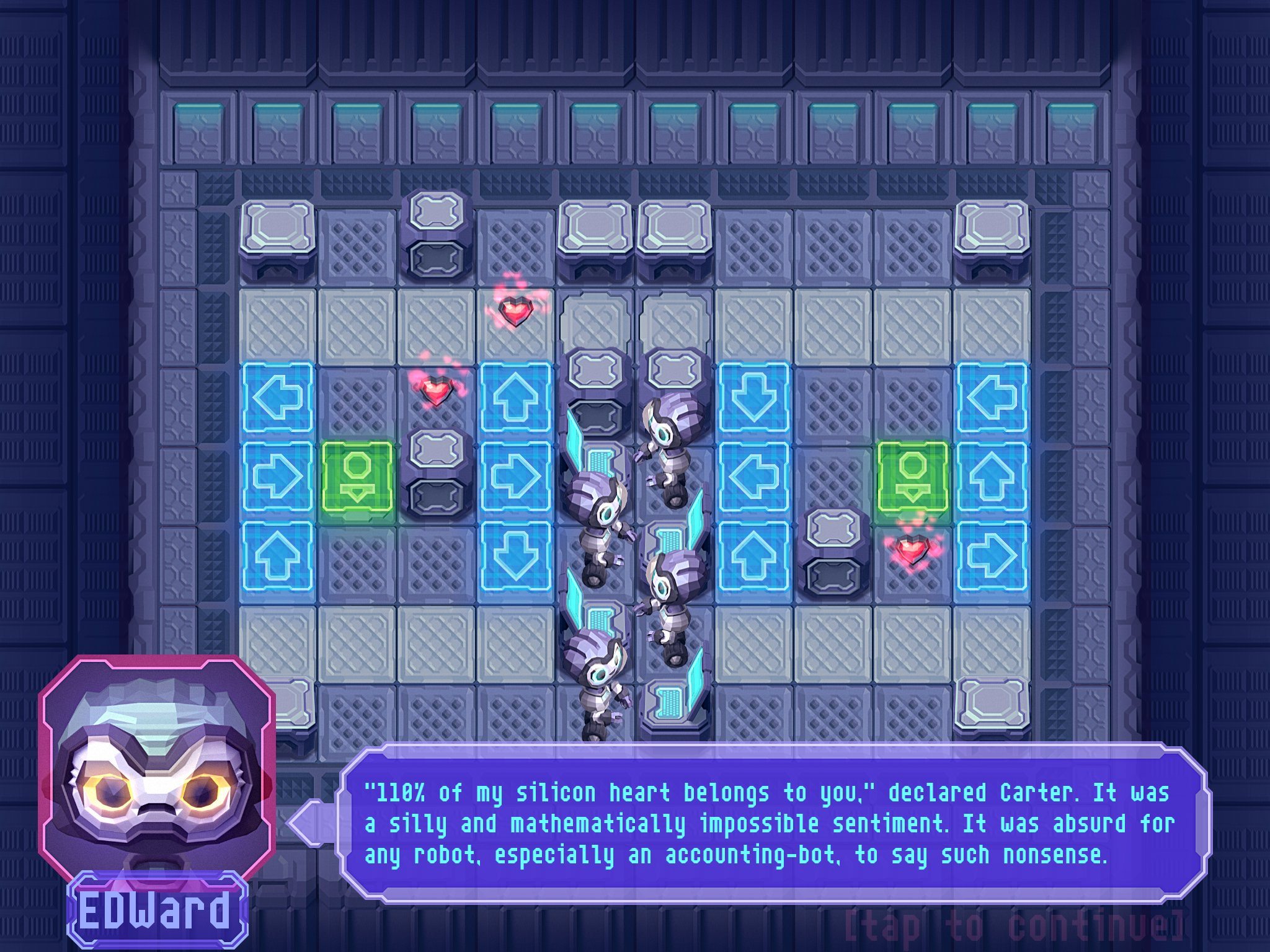 The pronoun usage is the standout feature for the game. The story is about two robots who discover love, and the game is set up in such a way that the player can name each of the robots and choose whichever gender pronouns they want for them. There’s the binary ‘he’ and ‘she’, the non-binary ‘zie’, ‘ey’, and ‘xie’, and the gender-neutral/non-binary ‘they’. While these don’t encompass the entirety of gender pronouns since there is no consensus (and that’s the point), it’s great to see a game that is actively inclusive.

A lot of the talk of diversity and inclusion in gaming is just that, talk. Here’s a game that actively is trying to be inclusive, and it does so in a way that’s really quite subtle. The names and pronoun choices don’t affect the game or story in any way; they’re just names and pronouns. The point is quite subtle. I can’t tell you how non-binary people will feel about the game’s take on gender representation, but I certainly hope that this pushes the conversation forward, and inspires other developers who care about these issues, to, well, incorporate them in their games. And they don’t have to make them a major, game-altering feature, but just acknowledging gender choices beyond male and female as this game does goes a long way. 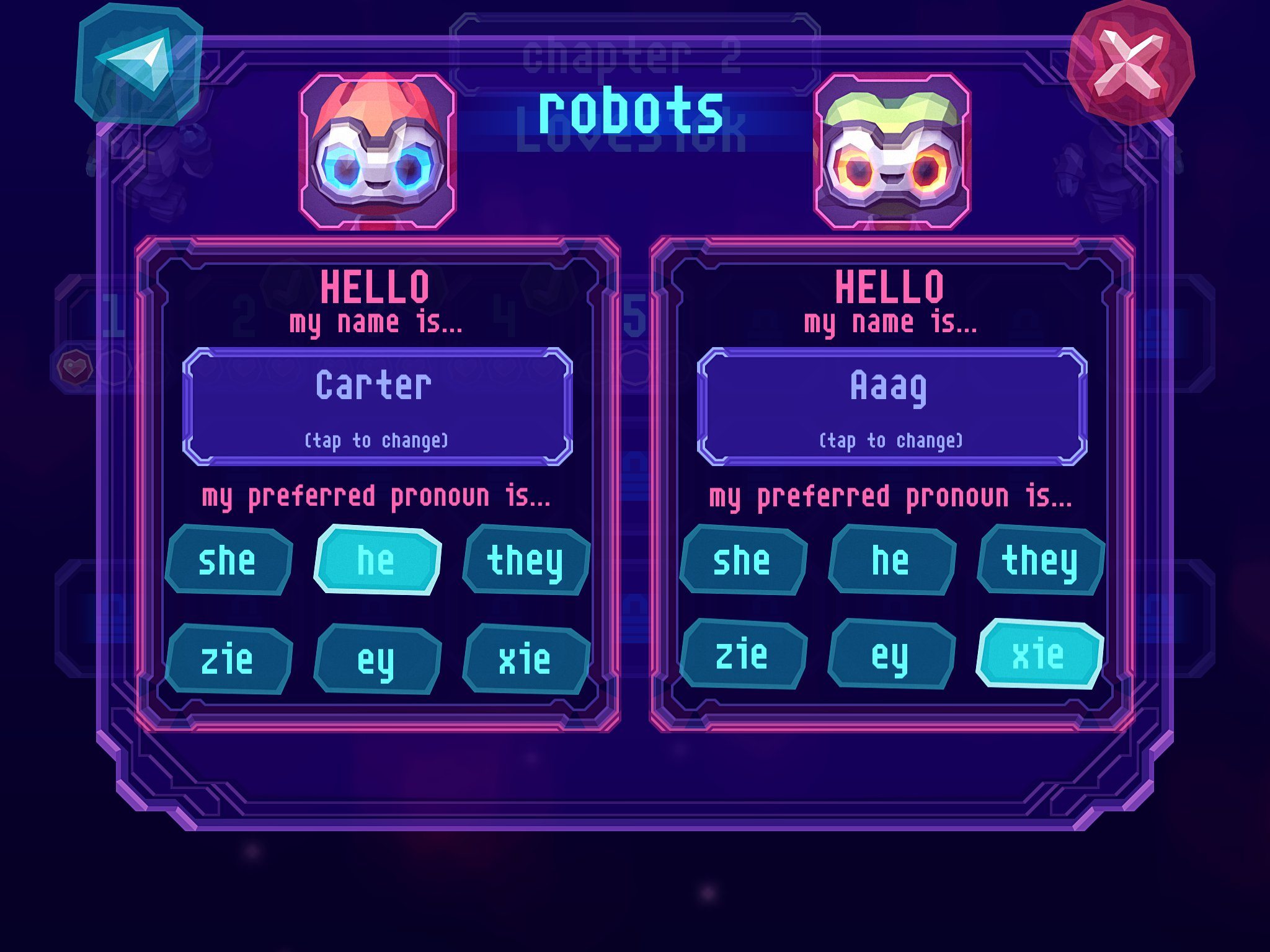 As for Robots Need Love Too, the game? Well, it’s not as interesting as its gender politics. It’s a puzzle game that resembles Chu Chu Rocket’s puzzle modes in many ways. By moving arrows around, they help guide the lovestruck robots around the levels, getting them to their meeting point safely, ideally collecting the three hearts strewn about the level as well. The arrows are all solid objects that can’t be picked up and moved about freely, but dragged about, with plenty of rearranging of those tiles to get them all in their right places.

The big problem with the game is that it progresses far too slowly. The game steadily introduces new gameplay elements, but it could do so in a more rapid fashion. The game quickly grew sluggish by the time I got to the end of the first level pack. There’s an interesting monetization scheme, where the first level pack is free and then players can buy 25 more levels for $1.99, or all 75 for $4.99, along with a pack of hints, which are also monetized through IAP. 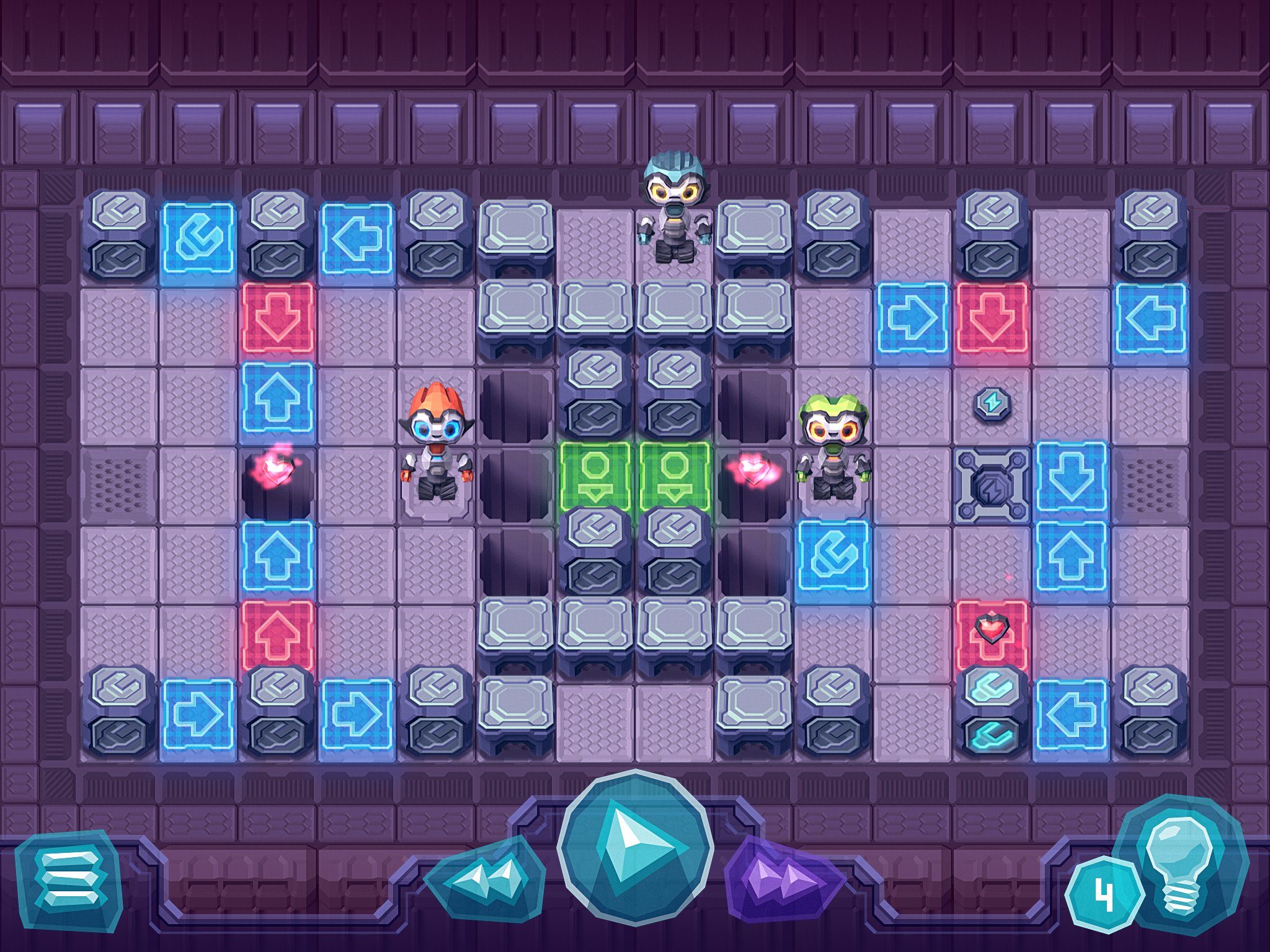 But it feels like if the game perhaps spent less time reinforcing the elements it introduced and went for a shorter game, it would feel a lot better. I fear that a lot of players will give up on this game long before they get to the paywall. I always point to the original Plants vs. Zombies as a perfect example of game progression; how it manages to take simple concepts, and through constant iteration, can make even people who aren’t ‘gamers’ understand complicated strategy. Repetition of concepts, in the way that this game handles it, makes it feel dull.

I think Robots Need Love Too is worth downloading just to see how non-binary gender representation can be done. It’s just ironic that a game with progressive values actually does a poor job with game progression.