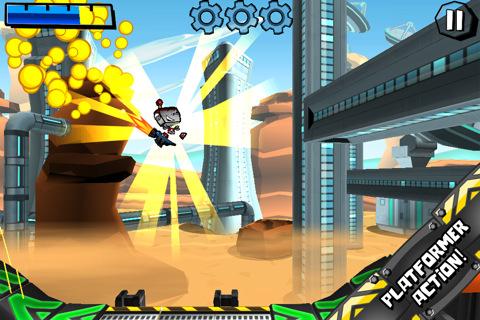 Whether or not robots will one day be able to feel love remains to be seen, but that doesn’t stop developer Fenix Fire from making it the driving force behind smartphone platformer Roboto. Over a series of short, testing levels, our hoverboarding hero is hunting down the robotic girl of his dreams.

It would appear, however, that fate stands in his way at every turn, as enemies constantly try to stop him in his tracks and tricky jumps and obstacles are commonplace. If only the controls were a little tighter, this would be an essential journey of metallic madness.

Roboto is your standard platformer with a few special tricks up its sleeve. Using his jet-powered hoverboard, the protagonist can make huge leaps into the air, float along horizontal planes, and scale high walls to reach his love.

Implementing a concept similar to that seen in Yoshi’s Island games, Roboto can jump and then hover along at a set height from a moment, allowing him to pass safely through tight gaps, or collect a line of powerballs that are floating in the air. Learning to master this technique is fairly simple and leads to some great platforming action. This is then coupled with the ability to leap against a wall, and then hold up and boost to fly up the side and over the top, providing the necessary abilities for some frantic level design.

Every now and again Roboto will also hit walls of light that reverse gravity, sending him shooting to the ceiling. Having to then couple all you’ve learnt about floating and climbing walls with the added difficulty of doing it all upside-down is interesting indeed, especially when trying to power through a level at full speed. And that’s not all – enemies appear frequently and Roboto needs to either bop them on the head or fire his laser gun to take them out. Shooting uses energy, however, and if he runs out, he’ll need to collect more throughout the level.

All this action is set against some of the most gorgeous backdrops we’ve seen to date on a smartphone. Most of the time you’re moving so quickly that you won’t have time to take it all in, but it’s great to see so much effort put into creating such a glorious world. 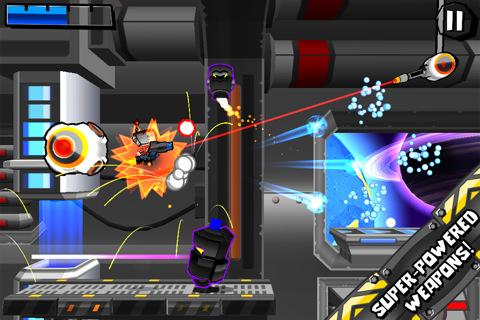 What’s not so great, however, is the floaty and somewhat frustrating controls. The game using a virtual d-pad to get Roboto on his way, but it doesn’t have the greatest feel. It’s next to impossible to simply stop on the spot, with our hero floating just that little bit too far even if you completely remove your thumb from the touchscreen. We also found moving him around to be rather fiddly at times. For a game that requires you do some precise movements and jumps later on, this isn’t a great combination.

There’s one particular element of the save system that we didn’t enjoy either. There are three giant cogs in each level, and collecting these should be enjoyable. However, if you hit a checkpoint part way through a level, then you end up biting the dust, the game removes all the cogs you collected – even the ones you grabbed before the checkpoint. This means that if you’re on a mission to grab all the cogs the checkpoints are utterly pointless, as you’ll have to start the level all over again to grab the ones which came before.

With plenty of levels to play through and online leaderboards to master, we’ll be playing Roboto for a good while longer. It’s just a shame that those controls couldn’t be a little tighter.