Might be tough to finish the game without purchasing extra items through in-app market.

The Empire of Machines has taken over Earth, and they came here to gamble

You would think gambling is an addiction that only humans experience. It’s forced upon us by the constant fantasy of that one big break, bringing a windfall of riches that would fill our indoor pool with gold coins, Scrooge McDuck style. In the world of Robotek HD we share this passion for one-armed bandits with our new robot overlords – but we are not, for one, welcoming that.

At its core Robotek HD is a turn-based strategy fighting game with RPG elements. You play as the last human on Earth who is going around the world, node by node, fighting the Empire of Machine with your very own super cool giant robot. The attacks from the robots are based on a slot machine mini game where you can roll in three different categories: warfare, hacking and powers. Each of the three categories has three different symbols that grant you your actions.

Warfare will spawn some combination of three different robot types that float around you, absorbing and dealing damage in various balances. Hacking offers some useful power-draining, enemy takeovers or force field spawns. Powers attack with lasers, shock waves and microwave attacks where timing is everything in the attempt to deal some heavy damage. You and your enemy take turns dealing and absorbing damage to each other. In order to win you must figure out the best way to deplete the enemy’s mainframe life before losing all of yours.

There are three levels to all the items you roll for in Robotek, and rolling three of the same symbol gives you the most powerful version of that item and an immediate extra turn. If you roll one of each symbol you’ll get all of the items, but they’ll be the weakest versions. In the case of your robot buddies, try to keep them alive and roll more of them in a later turn so they’ll heal and upgrade to a better version of themselves automatically.

The roll is mostly random except for the first symbol, which you can usually pick out by timing your trigger press well. Don’t be surprised if the enemy rolls a triple here and there – they’re playing by the same rules.

Special abilities are also available at the bottom of the screen by spending points that you accumulate round by round, one point at a time per round. Your first ability is available at 6 points, but they keep going up from there. If you spend your points on an ability, they’re gone and you start with 0 the next round – so choose wisely.

Throughout the course of the game you’ll earn charge, coins and experience points. Charge is used to enter nodes for battle. The early battles cost 5 charge, then 10 and so on. Coins are awarded after leveling up and can be used to upgrade your abilities. Robotek HD offers an in-app store where you can purchase more charge if you run out, which has been a point of some contention for many users. It’s not hard to blow through charge replaying battles because of some bad rolls during combat. 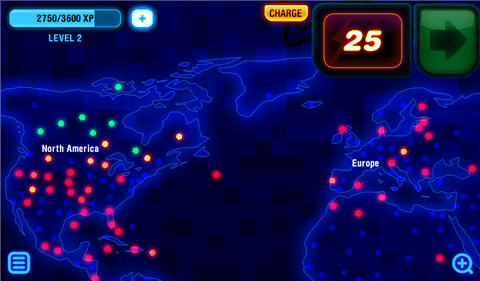 One of the things that really makes this game stand out are the graphics. They embrace a retro silhouetted neon edge glow, if that makes any sense. Everything from the motion backgrounds and world map used to select nodes have been tied in to a very clear design aesthetic that is very clean and sharp. The music serves mostly as attractive background noise, but the excellent sound effects are well integrated and add a nice layer of polish to an already well-conceived and executed game.

The biggest bummer to the package is definitely the presence of the in-app store where it’s very easy to find yourself facing the reality of needing to spend money in order to finish this lengthy game. Occasionally it will also feel as if the computer opponent is “cheating” by the happenstance of luck that falls upon them at key moments that might cause you to hit your home button and quit out of the app.

With over 200 nodes to battle through and 30 levels of player progression, Robotek HD packs a ton of game into a free base package. It has that pick-up-and-play addiction that is perfectly suited for the mobile platform that will keep you coming back, even if it induces frustration. The presence of in-app purchases probably won’t keep you from being drawn-in by this game’s version of the one-armed bandit. While many obvious comparisons to real life slot machines can be made, keep in mind that these machines shoot laser beams out of their eyes.