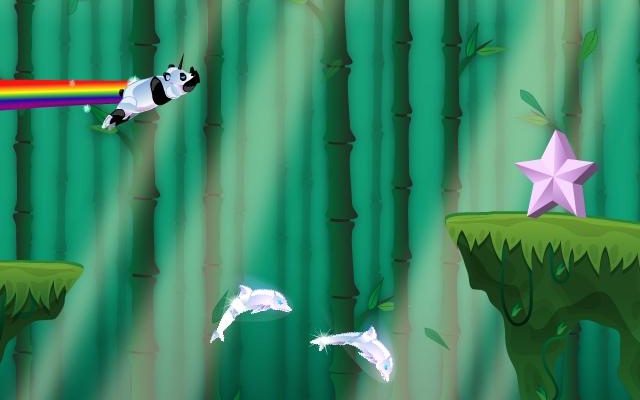 When Robot Unicorn Attack hit the internet a few years back, it was the kind of complete silliness that we couldn’t get enough of. An endless runner at its core not all that dissimilar to Canabalt, players controlled a horned horse automaton with a rainbow for a mane. And this pretty pony loved to collect butterflies and smash into stars, all while listening to Erasure’s “Always.”

At first, Robot Unicorn Attack Evolution feels alarmingly similar to its predecessor. In fact, if one were to only give it a passing glance, they’d probably be quick to judge it as little more than the original game with some freemium marketing slapped on top. And while there’s a ring of truth to such claims, once you scratch the surface a bit you’ll be surprised to find how much the formula has… well, evolved.

The first place you’ll see this is in the gameplay itself. You see, Robot Unicorn Attack Evolution takes the word “evolution” quite seriously. For every four stars you smash, your robot (and the environment around it) will “evolve” into something else. You’ll turn from unicorn to panda, then from panda to wolf, then from wolf to… honestly, I’m not sure. I’m not quite good enough at Evolution to have found out yet. But believe me – the “I wonder what’s next” appeal of the game will definitely keep drawing me back until I find out.

You’ll need to keep your combo going to keep evolving, and if you fail to, you’ll be bumped back down the evolutionary ladder. What’s more, each of these animals seems to have a different pacing, so adjusting from one to the next quickly adds a rather unique challenge that was missing from the original game. Either that, or we were decieved by the lumbering nature of the game’s cuddly panda bear. 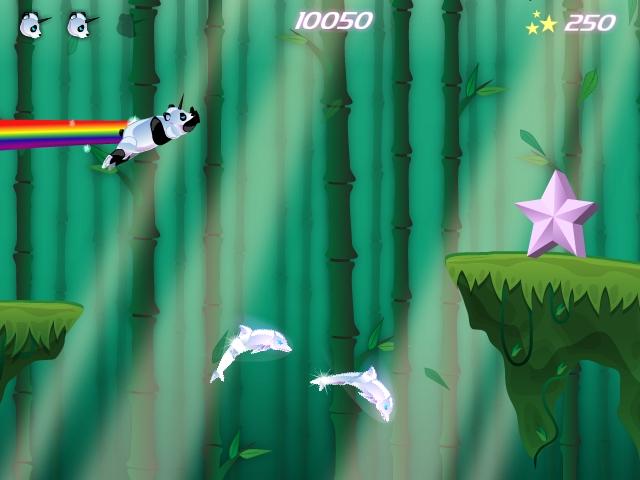 For each game you complete, you’ll be awarded experience points, achievements, and “fairy dust” – the Evolution‘s in-game currency. The experience points contribute to your overall level, which actually matters in Evolution – because the higher your level, the more bonuses you’ll be able to buy.

Bonuses are available at the start of every game as a one-time purchase, and can affect your gameplay in a pretty positive manner. You can spend 1000 Fairy Dust on an exploding horn that will save you from one star collision, or 750 on a triple jump rather than the game’s default double. If you’ve ever played Bejeweled Blitz, it’s a system that’s a lot like that. And the more you play, the greater the variety of bonuses becomes. And better yet, you can gift some of these bonuses to your friends.

Robot Unicorn Attack Evolution also introduces Daily Challenges to the series. These are neat little goals based around the existing formula, asking you to do things like survive 45 seconds in “ghost” mode where you can’t see your unicorn, or evolve in a set amount of time. You’ll get a free chance to take a crack at them, but after that, each attempt will set you back 1000 Fairy Dust.