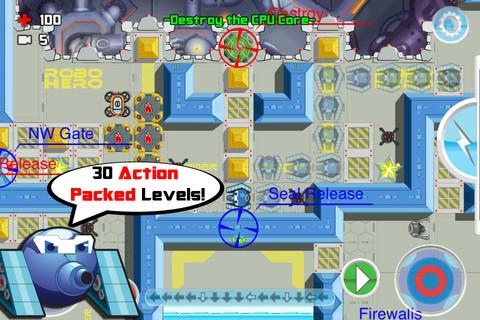 It’s never easy taking a stand against your own people. Just ask Robo, the goofy little robot starring in RoboHero. You see, Robo’s realized he’d rather work with humanity — as opposed to his fellow droids (who happen to be invading Earth). Even though this is a dangerous move, it’s also a ton of fun, and provides one of the most memorable strategy experiences to come to iOS devices.

RoboHero stars the aforementioned Robo, who has reawakened after being tossed on a massive junk pile. Robo is stuck on board a sinister space station that’s building a robot army as it hovers above Earth. While everyone else on board of the station wants to become humanity’s unforgiving overlords, Robo has decided that he actually likes mankind. As a result, he’s making a break to escape the station in order to help us hairless apes survive the coming robot apocalypse.

The game is a top down turn-based strategy title, but it’s got some RTS elements mixed in too. During each turn, you queue Robo with up to fifteen actions, like changing direction, motoring along, and selecting/shooting weaponry at objects and enemies. Once you’ve programmed out what you want Robo to do, you watch everything unfold and then program in another fifteen actions. If you’re familiar with the board game RoboRally, it’s something like that – but with more actions and a bit of a lone commando vibe.

Things quickly get complicated once you start having to guide Robo past hostile bots in each level. At first, this may seem intimidating because you can’t see planned enemy actions while you’re plotting yours. However Robo has a predictive camera at his command, which shows off enemy movement patterns. Once you’ve watched and timed out these patterns, you can then program Robo’s actions accordingly.

This all probably sounds daunting. I’m not going to lie: it is. Thankfully, the first few levels of the game do a great job of walking you through the general mechanics and letting you practice them before things start to get really dangerous for Robo. After that, it’s up to you to get through the game’s 30 levels however you can. If you play things safe, you can take it slow and scrape through most maps by the skin of your teeth, but you’re unlikely to get top marks during the post-level evaluation process.

Aside from the game’s very playable nature, the other thing that makes RoboHero a blast to play is how well the controls are implemented. Not only is it incredibly easy to program Robo’s actions, but it’s super simple to cancel any and all of them should you feel the need. Finally, the game’s graphics contain a lot of charm even though they’re relatively simple. It’s hard to appreciate this on the iPhone’s smaller screen, but if you’re playing on the iPad, you can see the details on character models that add a lot of personality; on top of all that, the game’s backgrounds look gorgeous.

At the start of each level, you’re also given access to an in-game store with a pre-determined number of credits to spend on weapons and upgrades. There’s no reason to try and save credits, either, since unspent currency doesn’t actually roll over. It’s actually a lot of fun to replay levels and give Robo different loadouts, just to see how it affects the overall play experience. 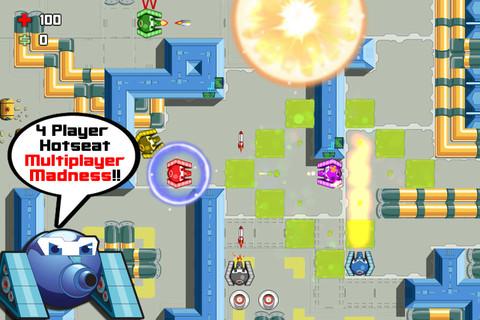 Finally, if you find yourself growing tired of the game’s single-player campaign, you can bring in some friends – but only for a pass-and-play mode. That’s really a shame, since the game feels like it would work really well with an online mode and provide a lot of lasting appeal.

RoboHero is great, no question about it. It manages to get just about everything right, which is no easy feat considering that the gameplay feels incredibly fresh for the iOS platform, and the interface is so well-done. Granted, the lack of an online mode is a shame, but it’s a small loss in the grand scheme of things. If you’re looking for something different, fun, and challenging, you should definitely join this little bot’s fight to save humanity.