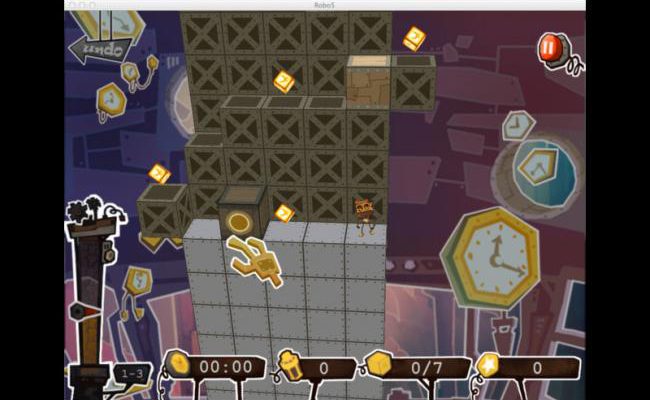 Help an existentially-challenged robot scale a mountain of movable boxes in this action-puzzle game.

We all know most robots have one thing on their minds. No, not hunting down oil for their mechanical joints or plotting to overthrow humanity. In Robot5 HD, all one robot wants to do is climb a mountain of boxes—that, and achieve psychological development through self-actualization. Nothing out of the ordinary.

In this puzzle game, you control a cute little humanoid with an identity crisis. His name is 5, and he’s on a mission to learn more about himself and his place in the world. (No doubt your own sense of identity would be fuzzy if your name were a number.) It’s also pretty rare you see a puzzle game open with a Nietzsche quote: “When you look long into the abyss, the abyss looks into you.” Yikes—who knew R2-D2 types could come with such emotional baggage? 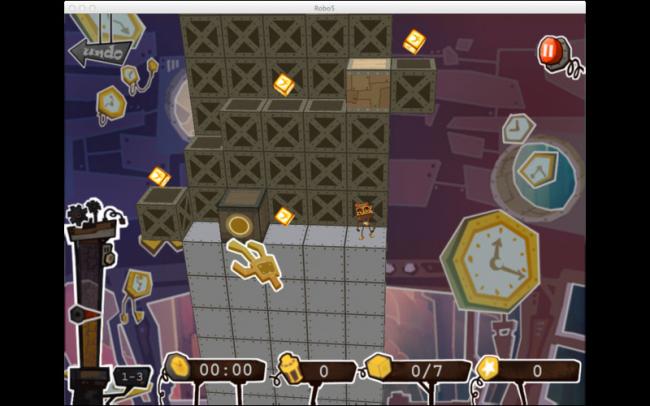 Presented in beautiful cartoon-like graphics, your adventure takes you through 40 levels filled with obstacles and power-ups alike. 5 will have to push and climb large cubes that hang in the air, making his way to the top of the vertical course. 5 has the option of walking across the tops of the cubes, or hanging on their sides to climb across them horizontally. You’ll have to help 5 push and pull cubes to and fro if some are blocking his way, allowing him access to move his chrome keister to the next area. Every eighth level, you’ll race against the clock to reach the top of the course within a time limit.

Visually, the game is total eye candy. The cut scenes sprinkled throughout, pleasant background music, and the vivid, clean design, make the game feel almost like an animated movie.

Controls are pretty straightforward. You basically click on the cube you want 5 to move to, but these controls aren’t always the smoothest to execute. It felt like pushing and sliding cubes in particular was a bit temperamental. It also gets a little tedious, being forced to only allow 5 to move one cube at a time. 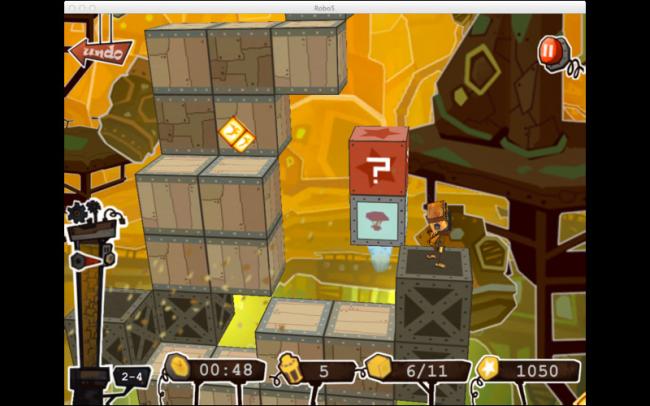 It also might have been nice to add a couple different camera angles—maybe even rotating the camera 30 degrees or so. It’d help to better visualize the cubes, whose 3D configuration sometimes makes it difficult to realize how many cubes are behind other cubes.

Robot5 HD certainly doesn’t have any substantial shortcomings, and is indeed a challenging, polished product that almost feels like it could be a home console game. It will likely go down as one of the year’s best action-puzzle titles. Tough difficulty, a hefty amount of levels, and pretty graphics guarantee a fun voyage into robot self-awareness for you and 5 alike.