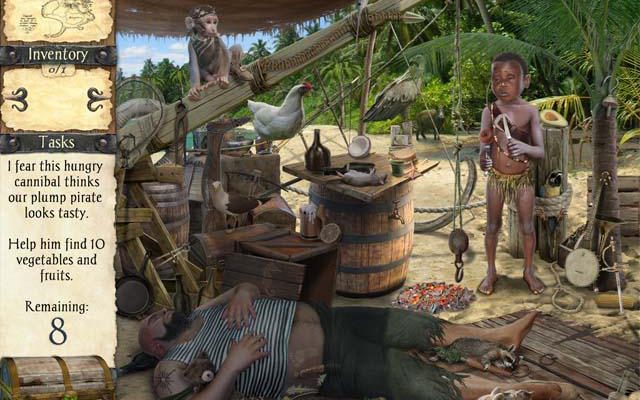 Being cursed has never been so much fun. (Rum not included.)

Pirates get romanticized a lot, but if Robinson Crusoe and the Cursed Pirates is to be believed, it was a pretty lousy gig. Swipe one inappropriate bit of loot and all of a sudden you’re marked with the Black Spot and doomed to haunt an island until the end of time. You do get to hang out with parrots and monkeys, though, which is kind of cool.

Robinson Crusoe and the Cursed Pirates takes a decidedly tongue in cheek approach to telling the story of Crusoe, who has unwittingly found himself consigned to the same fate as a crew of unfortunate pirates. To lift the curse, he must get a Black Spot item from each pirate, dunk it in some magic goo to make a potion, and force the drink down the throat of the captain who got them all in this mess. The pirates aren’t just going to hand over their cursed items, though. Each one requires Crusoe to first perform some task, then find all of the items on a list. The tasks vary wildly and wonderfully; you might have to solve a puzzle, collect enough fireflies to make it bright enough to see, or figure out a secret knock by feeding rats to an owl. 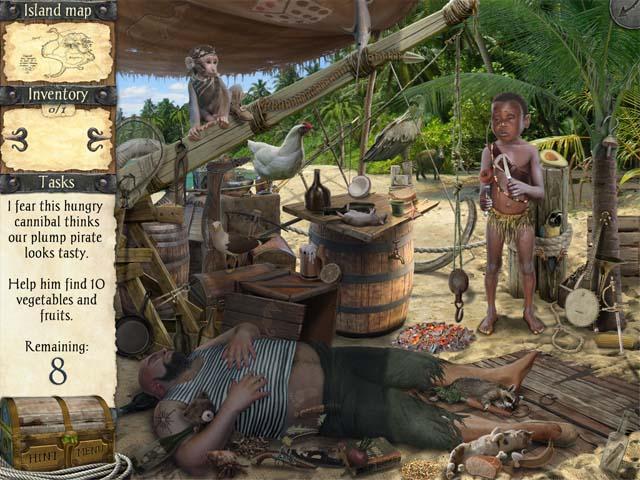 The hidden object sequences aren’t quite your typical shopping list hunt, either. In one level, you have to find all the bits to reassemble a pirate’s skeleton before he’ll give you the time of day. In another, you must determine what object got added to a scene in fifteen different rounds. Each list has certain items highlighted in blue that will require a little extra work on your part to find. Give a pirate in the graveyard a shovel, then be prepared to catch the anchor she flings across the screen. Hold a cup under a drip in the crypt long enough to get a full glass of water. Or grab some lipstick to plant a smooch on a pirate’s cheek to collect the kiss you need. You’ll never know quite what to expect from one level to the next, but it will almost always put a smile on your face.

After you collect a Black Spot item, you can head back to your camp to test it on Captain Flint’s pet parrot who, sadly, got turned into a monkey by the curse. Each dose of the potion changes the poor little guy into something else, and each version is funnier than the last. He’s a monkey, he’s a pineapple with sticks for arms, he’s a tiki idol, he’s a coconut! You’re given the option to nip back and dose the monkey after finding a Black Spot, but you can save them up and do a bunch at once if you’d rather just keep playing. 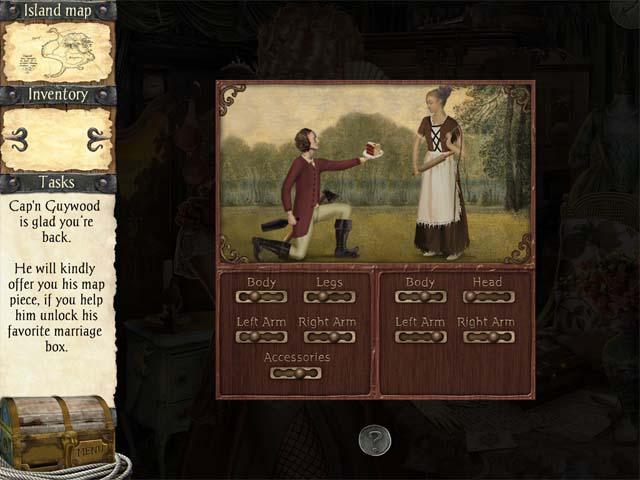 The one area where Robinson Crusoe and the Cursed Pirates can prove somewhat frustrating is in its lack of direction. For the very first puzzle of the game, you know two things: the owl would like some rodents for dinner, and you need a password to get through the hut door. It’s not immediately obvious that the three hoots the owl utters after tucking into his meal indicate that you should knock three times on the door to gain entrance, and some players may find themselves stymied before the game has even begun. Playing the relaxed version of the game offers more hints and also removes the threat of running out of time, though, so you may just have to dial down the difficulty.

Robinson Crusoe and the Cursed Pirates is a stunner of a game; the hand-drawn art is beautifully detailed and the pirates themselves each feel like distinct individuals, rather than just The Next Guy On The List. My own sole regret is that the game felt like it was over almost before it began, though that has more to do with how much fun it is to play rather than it genuinely being too short. (But, hey, if the developers would like to make a sequel, I’m not about to complain!)