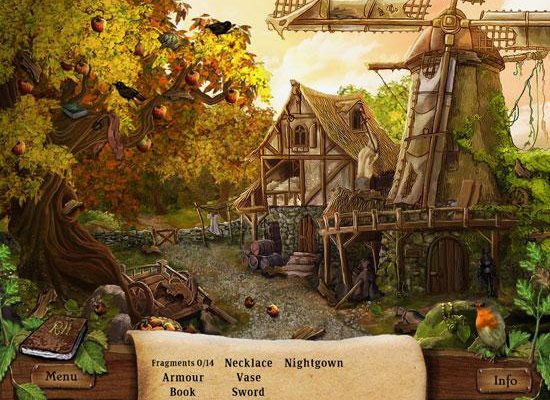 Robin Hood steals from the rich and gives to the poor, and in this new title from Legacy Games he also finds lots of objects and solves plenty of puzzles. Robin Hood is an easy going HOG that never gets too taxing, but also does little to set itself apart. It’s fun while it lasts, with plenty of great mini-games and puzzles, but it’s not particularly memorable.

The game actually starts near the end, with Robin Hood telling Maid Marian all about his adventures. It doesn’t stray too far from the source material, so you’ll get to see plenty of familiar faces and events. Along the way Robin will recruit his famous Merry Men, try to stop the infamous Sheriff of Nottingham, and, of course, attempt to woo Marian. In fact, the romance plays a large roll in the game. Robin will frequently risk his neck to speak with her, though the game doesn’t really explain much of their back story. Still, aside from the abrupt ending, the game does a decent job of telling an already familiar tale, with an occasionally humorous touch. 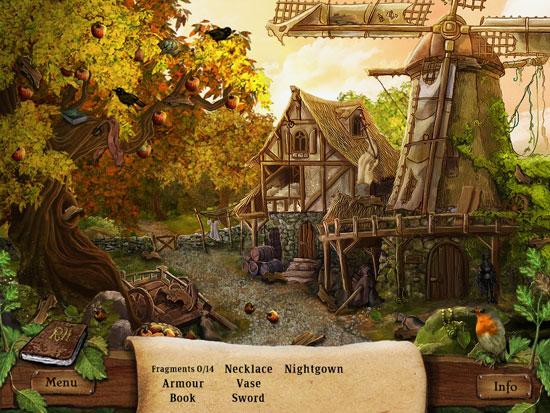 While the story of Robin Hood is fraught with danger and action, there’s little to be found in this game incarnation. This is due mainly to the fact that it’s a HOG. But even with the lack of action, Robin Hood does a pretty good job of incorporating the gameplay into the story. The hidden object scenes will have you finding weapons and gear for your gang of Merry Men and spotting guards so that you can sneak into places you’re not supposed to be. These sections of the game are relatively easy, with the prerequisite recharging hint system, though there are some instances where things can get a bit frustrating. This happens when the game asks you to find a whole heap of tiny objects, things like little buttons or coins. But when any real action takes place, like a fight or battle, the game resorts to simply shaking the screen to simulate what’s happening. It’s pretty awkward and makes these portions of the game feel a little cheap.

It may be a HOG, but only about half your time in Robin Hood will be spent finding objects. The rest consists of mini-games and puzzles solving. You’ll come across plenty of HOG mainstays like spot the difference and memory, but Robin Hood actually offers its fair share of interesting and challenging logic puzzles. There’s puzzles where you’ll have to divvy up money amongst your Merry men, and ones where you’ll have to plan a route so that you don’t run into any guards as you travel from point A to point B. The difficulty levels ranges pretty significantly between these puzzles, with some being fairly simple and others being quite difficult. There’s even a few timed puzzles that attempt to simulate target practice with a bow and arrow. Thankfully each of these puzzles is completely skippable, and there’s no penalty for passing on a particularly difficult one. 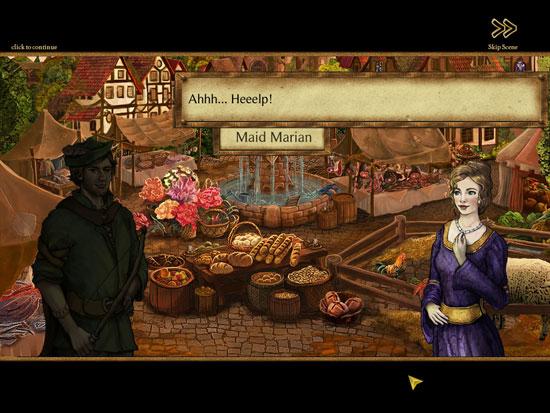 In terms of presentation, Robin Hood’s visuals get the job done but, like the rest of the game, there’s nothing here to really wow you. The graphics are detailed and colorful, but at times they can also get a but muddy. So much so, in fact, that it can interfere with the actual object finding. Objects sometimes blend together, making it hard to discern one from the next. It also doesn’t help that many of the locations in the game are in the forest, so virtually everything is either brown or green.

Robin Hood doesn’t really do too much wrong. The story is enjoyable, the HOG scenes are relaxing, and the puzzles and mini-games are challenging and fun. But it also doesn’t do anything particularly new or interesting. Unless the story of Robin Hood, Maid Marian, and the Merry men really intrigues you, you’re probably better off playing one of the many other, much more polished, HOGs out there.