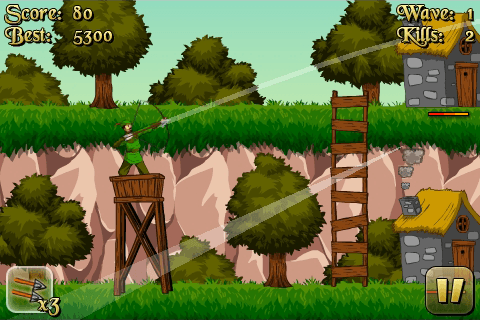 Rob from the rich, give to the poor, and always go for the headshot

Robin Hood may be best known for stealing from the rich and giving to the poor, but it seems as though he’s also quite the handy marksman as well. And in Archer of the Woods he puts those skills to good use. It’s a relatively simple cross between tower defense and a Worms-style action game, with some great production values and an ever increasing difficulty. But with no real level system and a very simple game mechanic, it doesn’t have enough depth to be anything more than a pick up and play experience.

The concept is simple: Robin is on one side of the screen and enemies march in from the other. While remaining stationary, he must use his bow and arrow to eliminate his foes and prevent them from destroying the villager’s homes. If all of the homes get destroyed, it’s game over. The enemies come in waves, much like in a tower defense game, and they come in larger numbers and more challenging incarnations as you progress. You start of fighting simple soldiers but eventually you’ll be faced up against powerful and goofy bosses like a troll wearing a pink dress. The number of levels in the game is essentially endless, as the challenge simply keeps ramping up until you’re eventually defeated. The goal, like most arcade games, is to rack up a high score.

Controlling Robin’s aim is also fairly simple, though it takes some getting used to. All you have to do is pull back on the touch screen, as if you were pulling back an arrow, aim, and then fire. The angle and strength you fire at determines where the arrow will land, but aiming can be a bit tricky. This due in large part to the fact that the game is spread out over more than one screen, so when the enemies are far away you’re essentially firing blindly. You can scroll across the screen, but when it comes time to fire you still won’t be able to see what it is you’re aiming at. There are also power ups littered throughout the stages and you can pick them up by hitting them with an arrow. They’re helpful, but unless you’re an expert shot you’re probably better off saving your arrows for the actual enemies.

Archer of the Woods is an arcade game at heart and, as such, doesn’t take itself too seriously. The graphics are simple, colorful, and charming, and full of goofy and well animated characters. All this really makes one fact stand out quite a bit: this is a surprisingly violent game. Blood splatters on the screen when you kill an enemy, and the game is fond of announcing when you score a headshot. For such an innocent looking game, the blood flows pretty freely.

If you’re looking for something to play in short bursts, Archer of the Woods is a great fit. Even though the controls take some getting used to, it’s fun and charming and the combination of high scores and Game Center achievements makes it fairly addictive. Though after some time it becomes clear that there’s not enough to the game to keep you playing for very long. But at only $1, Robin Hood is certainly living up to his name and giving something to the poor.