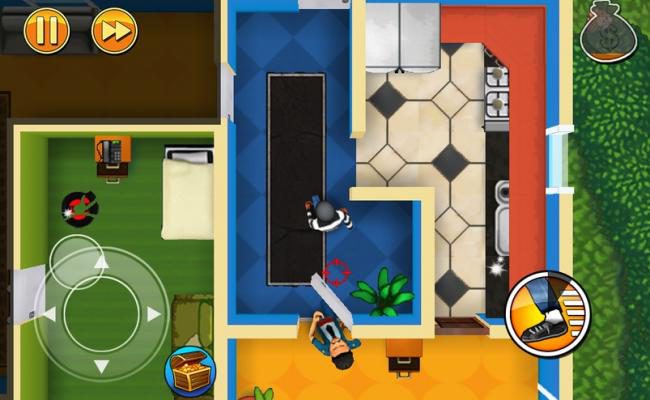 Can Robbery Bob steal our hearts?

Most people, at some point in their lives, have owed money. It may be college debt or payments on a car or maybe a couple bad bets with an unforgiving bookie, but we’ve all been there. Bob is no exception. After being busted out of jail by a raincoat-clad man, he is required to pay back the debt of freedom. Rather than starting a lemonade stand or something else more wholesome, he decides to rob others. Robbery Bob puts you in control of his latest crime spree to wipe out his debts.

The gameplay in Robbery Bob is heavily focused on stealth as you sneak into people’s houses and snag their valuables. Your controls rest on the lower hemisphere of the screen, with a directional pad on the left hand side and event controls on the right. You’ll use the right side on the occasions when you need to run away, need to hide, or have the ability to activate one of your “ninja” moves. The controls are pretty fluid for the most part, and aren’t intrusive in the least, which is helpful because you’ll want to see exactly where you are and where your potential captors are in comparison.

You’ll find yourself tip-toeing through your fair share of interesting levels. There are 50 in all, and while you’ll start stealing petty items from houses and apartments (is that broken vinyl record really worth anything? Might as well snag it just to be sure), you’ll eventually land in some very complex scientific-looking areas. The game elevates your crimes from the basic breaking and entering to possibly being guilty of grand larceny and potentially destruction of government property. It gets pretty off-the-wall by the end, and for a simple stealth game on a handheld platform, it gets pretty intense.

Maybe one of the few elements that pulls you out of the experience in the graphics. They aren’t unbearable, but they do look like someone took a sander to a bunch of pixels from the 90’s and just smoothed out their edges. There are a lot of elements on screen at a time at certain points, so perhaps there was a concern with having ramped up graphics in that regard, but it really doesn’t excuse the embarrassingly bad textures that make up some of the elements on screen. Grass, trees, and shrubbery look like they scanned drawings from kindergarteners and pasted them into the game. 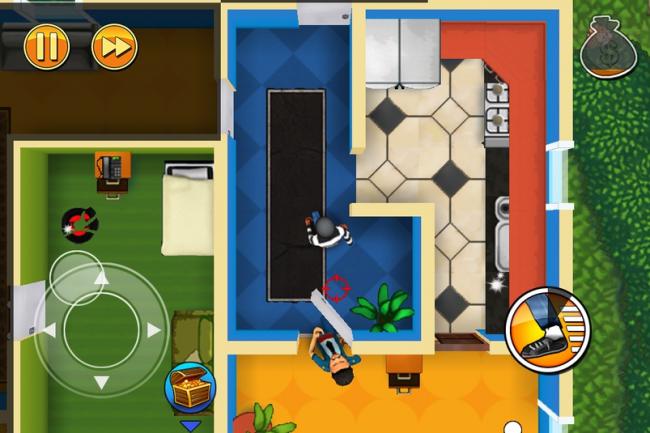 Robbery Bob also does a decent job at attempting to have a sense of humor, though their execution sometimes left a bit to be desired. The conversations between the robber and the mastermind are pretty cheesy at times, and there are moments of cringeworthy dialogue. “I have some ninja tricks up my sleeves” comes to mind. There’s also some weird reoccurring plot points, like the mastermind’s divorce, that play a little too out there to come off as funny. It’s hard to hold this too accountable for any unpleasantries in gameplay, but it doesn’t make the in-between stuff that much fun.

As far as stealth titles go, Robbery Bob is a pretty enjoyable one. The levels are varied enough to keep things interesting and the difficult ramps up at a steady enough pace that you’ll never feel too out of your element or like one level is totally impossible compared to the last one. It’s good for delivering some moments of legitimate fear of being caught, and the sneaking around feels authentic and tense. The game works despite the elements working against it, including some outdated graphics and painful dialogue. Plus, it’s hard to sympathize with a main character that is a thief. That said, you don’t have to like the character to like the game, and Robbery Bob is pretty likable.