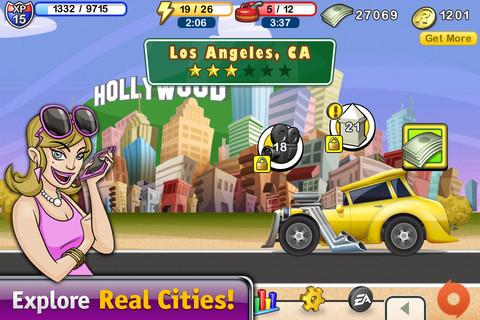 Road Trippin’ is worth a look for fans of US history

Games can be designed around virtually anything, and this time around, Electronic Arts is creating one about road trips. The iOS app is entitled Road Trippin’, and believe it or not, it’s actually a bit of an educational game. Most closely resembling the social game genre in terms of its mechanics, the game tasks players with traveling around the United States and visiting hundreds of different cities in the process.

Starting out in the state of Maine, the general idea is to visit each highlighted city within the U.S. and participate in every activity there is to offer. Though it sounds like a bit of a task, it’s actually quite basic. Most of Road Trippin’ consists of tapping icons when at a selected destination. In truth, it is a little bit dull, but there is a bit of a silver lining to be found when in the hands of the right person.

At each city, there are three or more activities that can be completed at the cost of slowly recharging energy. Sadly, there is no actual “activity” to be had here, and upon tapping the activity, currency, experience, and the occasional collection item (collections are merely sets of items that earn badges upon completion) will appear. When all of the activities have been completed in an area, that city becomes “mastered,” thus the unstated concept is to master each state (turning it green) in the U.S. That said, many activities have level requirements, so more often than not, players will need to return to the city at a later time.

To travel to a new area, players will visit a map of the continental U.S. and be presented with different paths that lead to various, neighboring cities. To travel there, another tank of gasoline is consumed, with more being used up for farther cities. Like energy, this slowly recharges, but unlike it, the maximum amount of gas available is directly correlated to one’s car (max energy increases based on level). Ironically enough, the bigger one’s car, the more gas it can hold, even though a smaller Sedan should theoretically have much better gas mileage than an SUV.

These better cars are bought via the cash earned on the road, but along with this, players can opt to buy performance enhancing and decorative items. The former refers to items from the in-game store, such as fuel injectors and will increase the maximum gas capacity of the current car owned. Others can improve things like energy recharge speed or experience gain. As for décor, this consists of buying ornaments, decals, tires, etc. for one’s car. It is also worth noting that while most of these items all cost the earnable in-game currency of “Cash,” some of the better looking premium items cost the virtual currency “Road Coins.” These comes in purchasable packs that range from 15 to 1776 (the “American Forefather’s Pack”).

Most of the time, however, the in-game Cash is more than enough to play the game. In fact, this becomes more readily available as players travel. Certain cities within the U.S. have business franchises that can be invested in and will periodically pay out small amounts of cash. This includes Cuban Cigars in Florida or Philly Cheesesteaks in, well, Philly. Also along the road, players will run into Sears Auto Centers (where they can refill gas and energy at the cost of Road Coins), rest stops with scratch off games that can reward gas or cash, and other random landmarks.

These landmarks play into the last major aspect of Road Trippin’, the educational element. At every city, landmark, and activity, there is a blurb of historical information about it. It isn’t a lot, and unfortunately, many players will not read it, but for those that do, it is actually quite interesting to learn about all the various attractions that pepper the U.S. There is a bit of in-game incentive to remember this information as well. Every once and a while, the game will present players with a single question quiz based on the places they have visited. If they get it right, they will earn bonuses such as cash. 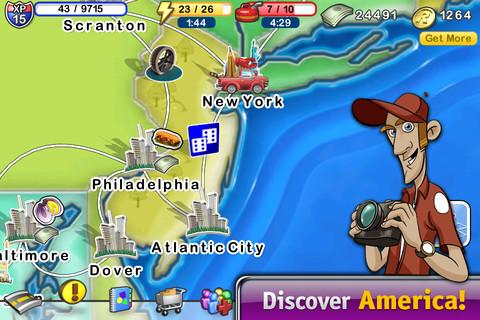 On the downside of things, the game comes with a cluttered mess of a quest system. It isn’t that quests are hard to do, but they appear so frequently that players are likely not going to really check them. This is also because there really is no conscious effort needed to complete them. So long as users are traveling around the country and completing activities, the quests complete. Other than this, the game is going to be very hit and miss with most users. The play is little more than tapping on things. Despite being well presented, if players don’t care about history or arbitrary badges, then Road Trippin’ will become boring very quickly.

Overall, Road Trippin’ is a well made game. With the EA tag attached to it though, that isn’t terribly surprising. Nevertheless, the simplistic game design is not going to appeal to everyone. Going around the country tapping on things and not really doing anything tends to get rather dull very quickly. Regardless, for those that like to learn and enjoy history, then the EA app is a great free game to try out. Fact of the matter is that within even the first five to ten minutes of play, users will likely learn something new and interesting. That in mind, if you are one that likes history and learning, Road Trippin’ is worth looking at. If not, you’ll probably be quite bored.