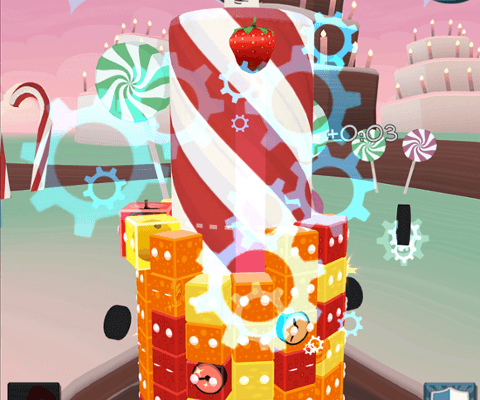 Jell-O has been many things for me over the course of my life: comfort food when I’m sick, a dessert at parties and after dinner; even a staple to subsist on during university. Easily its most fun role, however, is its recent turn as gelatinous antagonist in developer Robot Invader’s Rise of the Blobs. Fair warning, however: attempts to eat through the screen will prove unsuccessful.

Moving from a humor-filled world of medieval miniatures in their breakout hit Wind-Up Knight to an absurdist tropical battleground, Robot Invader proves with Rise of the Blobs that they’ve mastered the art of the catchy mobile game concept. That quintessential “means to an end” style of design that flouts logic and instead delivers an experience you just want to play. This time around, players take control of adorable talking marshmallow Mal in his quest to escape an ever-rising circle of cubed gelatin as it climbs from the primordial fruity ooze to overtake the hill on which he sits.

At first glance, the game seems to skirt along the edges of the Tetris and Bejeweled concept of color and block matching. As with their first title, however, Robot Invader’s sophomore release avoids the pitfall of homogeneity by rethinking genre assumptions about what the player does and how they do it. Instead of stacking blocks into place, or identifying matching colors, players are tasked with hurling fruit down from the top of the screen to load it into already existing stacks of jiggling doom below. Like flame to the proverbial wick, stuffing a cube with its matching colored fruit makes it eligible for destruction, along with any adjacent blocks of the same color. The only real goal? Survive – all by rotating Mal’s pillar and swiping downward with speed and precision to keep ever-quicker waves of tasty doom from reaching the top tier.

It’s a shame the game’s initial menu screen is so crowded with icons, but don’t let the clunky flow get in the way. Rise of the Blobs is a show piece for seamless touch controls. The core three actions of the game – rotating the pillar with side swipes, swiping down to speed up the descent of fruit, and tapping the gelatin to explode it – all flow together so well that a learning curve is virtually non-existent. In short order, I found myself absorbed in the multi-directional dance of juice-bursting, frantically searching for the right color on which to land my fruit to chain massive combos. And if the devil is in the details, Robot Invader keeps the devil at bay with a spectacular physics system that registers last microsecond turns of the pillar, allowing fruit to fall into place on intended squares. 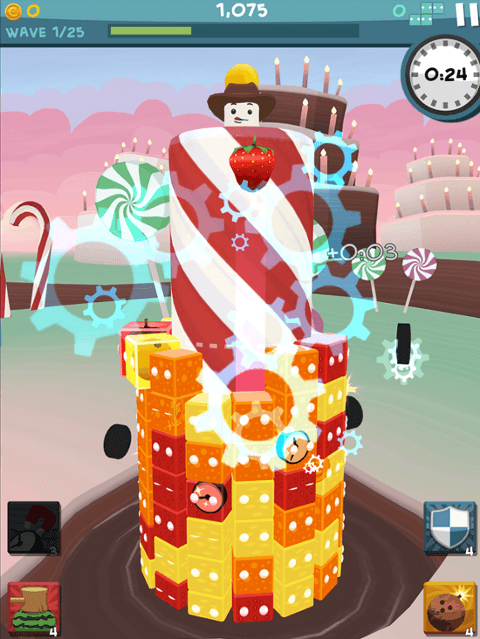 For some, the game’s free-to-play leanings will be enough to disqualify it, but ultimately Rise of the Blobs puts its mouth where it wants your money to be. Certainly, massive high scores are driven by the game’s stable of power-ups and permanent upgrades that add new mechanics to the battlefield and allow players to deploy powerful, round-saving effects.And while coins may be a hair sparser than I’d like them to be, that’s quite clearly the point: Robot Invader is giving you a spectacular game free of charge, and banking on the idea that the fun factor included will be compelling enough to sway players to either grind, or shell out cash to delve deeper into the experience. Call it greedy all you’d like, but this is freemium done right.

In keeping with their subtle but effective changes, Robot Invader also delivers a clever twist on the meta-goal mechanic that shot to popularity with Jetpack Joyride. Persistent goals straddle multiple play sessions and don’t disappear as they’re completed, instead offering the player a randomly selected reward when they complete all three in a current set. In levels where I knew I had completed my final goal, I often found myself willing to cut play short with a purposeful loss to snag a prize. Way to make me feel like a kid at the dentist’s office again, Rise of the Blobs. Couple this with a rank system that opens the door to new fields and items, and you’ve got an experience of refreshing depth. 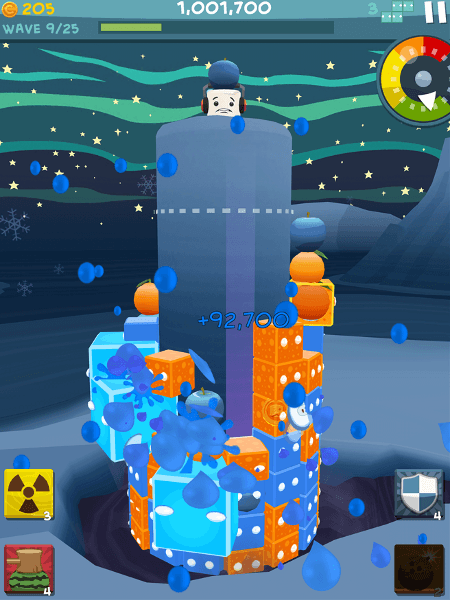 In fact, one of the only notable complaints I have for Rise of the Blobs is its pretense as as a game full of puzzling depth and strategy on the mechanical side. My advice to Robot Invader? Drop the pretense. This is a game of inevitable, mounting difficulty whose speed and barrage of content will overwhelm your reflexes no matter your skill level. That frustrating difficulty is also the game’s greatest asset, as it drives players to jump back into another round of tap and swipe mayhem. Variety comes in the great mix of play styles (marathon, timed, etc.) and stages, each of whom bring new types of fruit with different entertaining abilities. All told, however, Rise of the Blobs is about the constant pursuit of that satisfying burst of fruit. Like Jell–O.