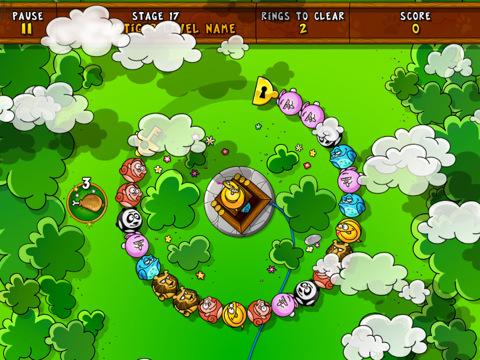 Part of a game’s challenge is simply learning to play it on any given platform. When Zuma came out, the hardest part was using the mouse, keyboard or game controller to rotate the frog shooting the marbles to exactly the right angle before firing. But what if you could just tap exactly where the marble was supposed to go? Would it still be fun, or would it be too easy? Riot Rings addresses this problem by taking the basic Zuma formula and adding so much to it that you forget that the issue was there in the first place.

The premise in Riot Rings is to corral zoo animals gone wild by… erm, shooting them from a crate in the middle of the screen into other animals circling you, matching three and eliminating them. Sure, it doesn’t work, but that’s not important. All you have to do is tap where you want the animal to go, which takes a lot of the stress of aiming the old Zuma way.

But, as mentioned, it’s not that simple. In Zuma, the goal was to eliminate the line before it travelled along a track to a destination. Here, there is a lock and key on each side of the animals on the ring. If too many animals arrive (or the circle shrinks!) then the key goes in the lock and it’s game over.

The titular Riot Rings themselves aren’t solid either. The rings can undulate, curve, grow, shrink or spontaneously change direction. There can be more than one wave of enemies to defeat, more than one simultaneous ring or even have them overlapping, and morphing.

Every ten levels there are larger boss creatures that need to be kept at bay by firing animals at them while trying to eliminate the rings. All of these challenges elevate Riot Rings from a simple puzzle game to a twitch arcade title – and makes it crazy fun.

Of course there are power-ups to help you, such as meat that causes some animals to stampede off the ring, or a tranquilizer dart to slow down the ring’s movement. But even these power-ups require some fast reflexes. When they appear, a five-second countdown appears on them. The faster you tap them, the more effective they are.

Riot Rings also has that wonderful quality of having real personality to it. The graphics are nicely hand-drawn, with animals that will hiss and growl at you in a cute, cartoony way. The graphics can also add to the challenge through weather patterns. Clouds can blow in, turn from transparent to opaque and disappear during a level. The sound is a bit more minimal but fun. The animal sounds are cute and fun, with great quality music cues (you’ll laugh whenever you get a game over). And yet there’s no in-game music. Sure, neither does Angry Birds – but it makes things feel a little bit empty without it. 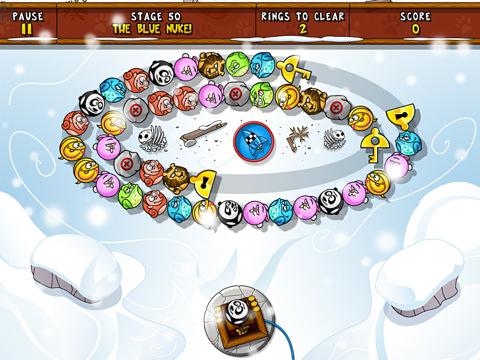 You’ll only notice it because you’ll be playing Riot Rings for a long time. The game currently features 101 levels, with achievements, a Zen infinite play mode and the ability to practice any level you’ve completed. The developers have promised more content in future updates as well, which will make a great big game all the better. The only issue during these 101 levels is the occasional difficulty spike – frustrating, but not impassible either.

Riot Rings could be poised to be the next big thing on the App Store. It certainly deserves to be. It’s got just about everything you’d want in a portable puzzler, lots of innovation and challenge and the ability to put a smile on your face. It’s that rare app that absolutely should be an important part of your collection.