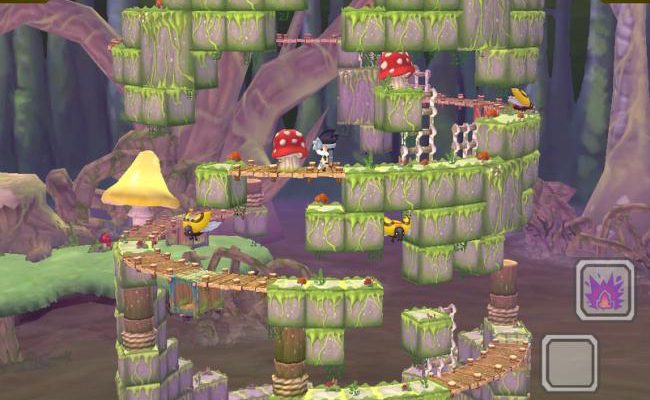 For a game that leaves an entire community stranded on an island after a terrible storm, Chillingo’s Rinth Island is unbelievably charming. As a near-perfect port of Buzz Monkey’s late 2011 Facebook app, Rinth Island delivers innovative puzzle gameplay, gorgeous Retina display visuals, and an infinite amount of puzzles. Despite the oversaturation of iOS puzzle games, this one is simply one of the best the genre has to offer.

Your island adventure begins with selecting a character, either Gimble (male) or Libby (female). With your entire town of Landingport rocked by a great storm, your job is to help the disheveled townsfolk put the pieces back together. Whether it’s saving your injured friends, hunting down lost merchandise, or uncovering the mysterious ruins of the island, there’s plenty of work to be done.

Each mission is relatively simple: navigate through each area’s puzzle to retrieve an item. While a few of your early puzzles follow plenty of platforming clichés (push blocks, climb ladders, etc.), it’s Rinth Island‘s unique rotating interface that keeps things unique. Instead of working on flat land, each area’s puzzle wraps around in a cylinder, allowing for easy visibility and backtracking. This cylinder mechanic becomes the central focus of many later puzzles, creating unique and complicated combinations that are both innovative and fun.

Characters and environments are rendered in crisp 3D, but move in a two dimensional space. The big-headed characters are colorful, and multiple outdoor environments keep puzzles fresh and fun to explore. Small details, such as your character stopping to wave at the screen when they remain idle for too long, simply put a smile to our faces.

You can control your adventurer via two schemes: arrows or sliding. Arrows control functions like a traditional handheld console, while slide controls guide your character by keeping your finger placed in the direction you want them to walk. Both schemes also feature buttons for item usage, such as flipping switches or dropping dynamite. While the arrow control scheme favors the iPad, both options lead to smooth character movement. Each option is available for either side of the screen, allowing for an even greater degree of flexibility. 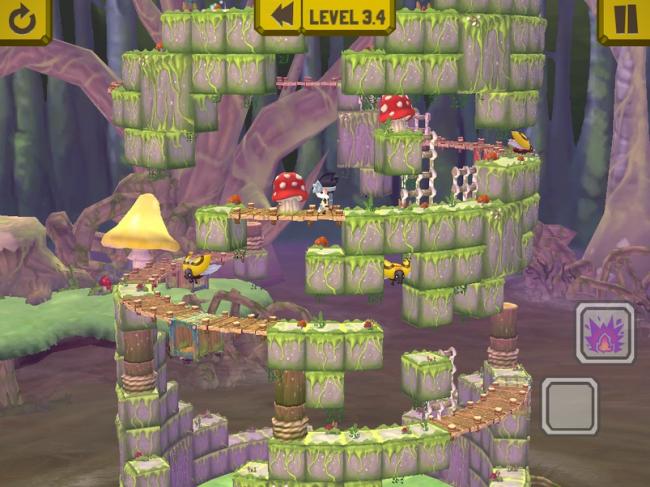 Stages are broken up by multiple areas on a map. Each major area contains six “missions”, which in turn contain five stages. Perhaps the best part of Rinth Island‘s gameplay is the vast variety of features that each set of missions contains. Every new set introduces a new element to the puzzles, including dynamite, spinning tops, and cannons that fire in three-dimensional space. Some levels require a great amount of brainpower and careful thinking to solve, while others pit your reflexes against time. The puzzles might be challenging, but gameplay never grows stale.

Despite the seemingly low count of stages in adventure mode (currently 60, with 30 more on their way soon), Rinth Island is actually one of the deepest games available on iOS. Each stage in adventure comes complete with three “challenge” modes, encouraging you to replay maps for the minimum amount of steps, the least amount of time, or through alternate paths that require you to gather crystals before you complete each stage.

The ultimate difference maker, however, is the level editor. Not only can you design huge custom maps with every available in-game asset, but you can also play with public creations as well. Every public custom stage comes complete with statistics, such as the expected difficulty, the average player rating, a leaderboard of fastest completion times, and the percentage of players that successfully complete each stage. Rinth Island is already a great game, but custom levels are the icing on the cake. 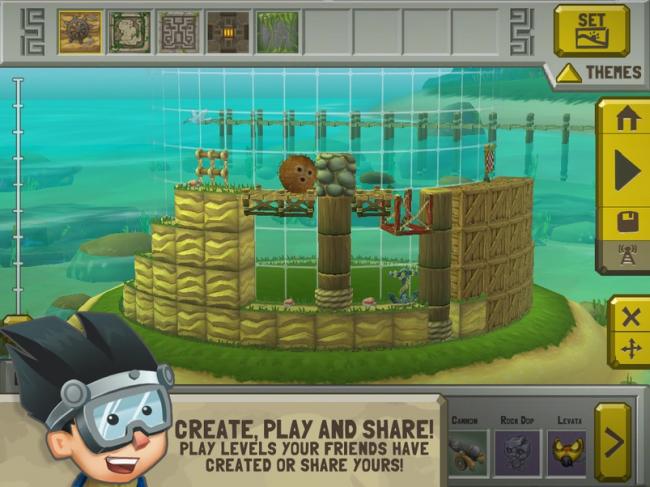 The only issue we had with our puzzles was occasionally difficult level design. Many later stages rely on a tough trial and error system that punishes tiny mistakes. There’s a “rewind” tool available for undoing recent mistakes, but only as an in-app purchase of .99 cents. While having an undo button definitely helps, some stages are so complicated that a tiny mistake early in can cost you a level minutes before you realize it. Puzzle veterans might actually enjoy the challenge, but more casual players might find the later stages too daunting to complete.

Simply put, Rinth Island blew us out of the water. Its unique presentation and incredibly deep gameplay make it one of the best puzzle experiences to be had on an iOS device. If you’ve been looking for a challenging puzzle game to add to your app library, Rinth Island just might be the getaway you’re longing for.