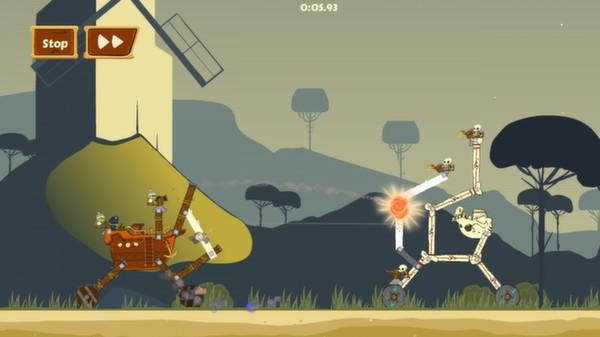 Destruction with a purpose

Whether it’s a desk from Ikea or a tiny LEGO creation, successfully building something is an awesome feeling. And as we’ve learned in the past with Minecraft, that sentiment carries over into the virtual realm. Well, sometimes it does. Rigonauts makes a valiant effort, providing players a chance to construct and do battle with a vessel all their own, but the concept is marred by a few key elements.

The game tells the story of the Hobs, a species whose lives have been dedicated to serving their evil overlords. After years of oppression, they decide it’s time to hop on a ship and escape. They quickly arrive on the shores of a new island, where everything seems to be going well. But as evil beings are wont to do, their former masters track the Hobs down and declare war.

The Hobs’ are a crafty bunch, and they’ve made their ship movable on land by adding wheels to it. You begin each battle with a completely undecorated vessel, and your goal is to add on various materials and weapons until it’s capable of taking down the enemy’s rig. Once you’re happy with the additions you’ve made, the battle can commence.

The battles are automated, so all you can really do is sit back and hope you built a capable enough vessel. You can check at any time which weapons are effective against which materials, and even select where on the enemy ship you’d like to fire at. Unfortunately, the constant movement of both ships and varying weapon trajectory means you won’t always hit where you want to. It’s frustrating, but it becomes more manageable with practice.

If the match is quickly going south, you can always return to the drawing board and try out different ideas. You can’t exactly go crazy, though, as you’re limited to a finite amount of resources. Furthermore, using less guns and other materials will net you additional stars in a level. Stars are required in order to progress past certain areas in the game, meaning you can’t breeze by and ignore their existence. While that’s an interesting way to force the player to weigh their decisions, I couldn’t help but fantasize about epic monstrosities as I built relatively small vessels with well-placed weaponry. And it really didn’t help that the enemies clearly weren’t held to the same restrictions as I was; a fact that became rather depressing when I saw them controlling a massive skull-shaped monstrosity. 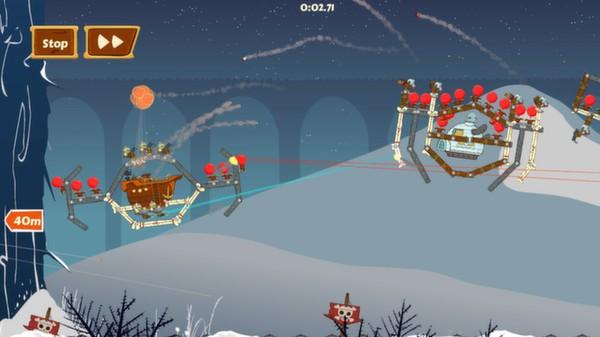 In spite of its issues, there’s still a lot of fun to be had with Rigonauts. Many of the later levels challenge you to think outside the box in some interesting ways, and seeing your ship of underdogs successfully take out massive ships is very rewarding. Problem is, there’s not a whole lot here for the price. You can play through the game in 3 or so hours, and all there is to do after that is go back and try to earn three stars in every level. It would have been great to see some sort of online component, or perhaps a level creator that encouraged players to go wild. But alas, perhaps in a future update.