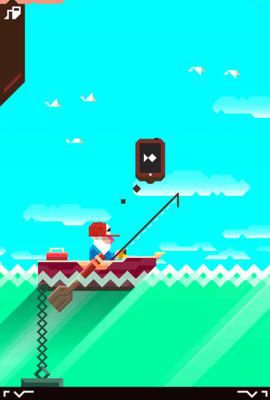 This just got reel.

If you’re reading this, and you haven’t downloaded and played Vlambeer’s Ridiculous Fishing, it means that you’ve lived a joyless life since it hit the App Store last night. If by some chance you’re stumbling across this in the days, weeks, or – let’s not think about it – months following the game’s release, and still don’t have it on your phone or tablet, you have a dangerously large fun vacuum you need to fill. And if… Okay, let’s just put it this way: you have absolutely no excuse not to purchase and play copious amounts of this game. Unless you’re reading this hundreds of years in the future on a supercomputer in a post-Earth colony. And even then, you’re on thin ice.

I suppose I should tell you a little bit about this fishing, shouldn’t I? It’s ridiculous. Listen, are we done here? Because I have somewhere to be, and it really shouldn’t have taken you this long to download the game.

Since I have your attention, I suppose I can tell you a little bit more about it. Based on the Vlambeer’s 2010 Flash hit Radical Fishing, Ridiculous Fishing is the result of two years in the developmentGage of Spelltower fame, Hundreds artist Greg Wohlwend, and Hotline Miami composer Eirik Suhrke). In that time, this indie Voltron has refined an already clever concept into one of the most mechanically satisfying experiences you’ll ever find, and wrapped it in a dazzlingly cool aesthetic.

You’re Billy. Billy is on a quest to fish his way to fame and notoriety; a quest which ties inextricably to his past, and for which he’ll go to any lengths (depths!?). Across four substantial stages and an endless mode, you toss your lure into the unknown waters of fate (well, of the ocean I suppose), and tilt your device to send it as far down as possible. Not content to catch fish the old-fashioned way, Billy slyly avoids them until the last possible second.

As soon as you touch one, though, things ratchet up a notch! Your lure begins to ascend, and for every bit that you exercised control on the way down, you’ll need to react at lightning speed on the way up, zig-zagging left and right across the screen to snag every fish you can before you break the surface. Once that happens, your aquatic bounty flies wantonly into the air, and it’s your goal to tap the screen like mad to shoot each one before it hits the water again.

Let me reiterate: Ridiculous Fishing is a game where you catch a humanly impossible number of fish hundreds of feet under the water, throw them into the air – sometimes into outer-freaking space – and shoot them with a gun for money. You’re not in the same room as me, but I just yelled that paragraph as I typed it. 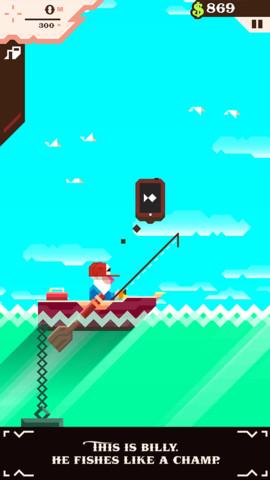 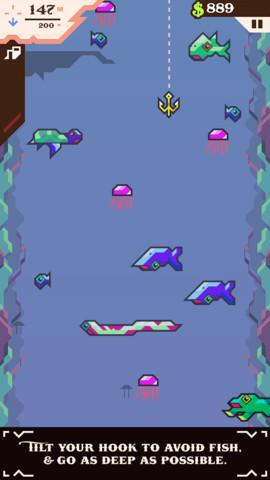 The genius of Ridiculous Fishing comes from the fact that it’s actually three tightly woven mini games in one, which tie together in one of the most magnetic compulsion loops you’ll find. The underwater portions of the game have all the tension of the best endless divers and climbers out there on the App store. As you master the precision tilt controls, you’ll go from snagging a fish accidentally almost right away, to weaving in and out of a living minefield. The dense but logical organization of fish makes the learning curve satisfying every step of the way, and embodies the ultimate iOS commandment: make the player feel like they’re doing a hundred epic things while only asking them to do one or two. The avoid/catch dichotomy is also a delight for spatial gamers, whose synapses will be tickled as they memorize the lay of the land on the way down and execute on epic catches as they wind back up.

In the air, things are similarly hectic. And by similarly, I mean to the power of twenty. In a limited amount of time, you need to tap the screen furiously (or swipe it, depending on the gun you have) to kill each fish and snag its dollar value on the black…fish…market? Just go with it. Either way, Vlambeer crafts the perfect Yin to the underwater segment’s more measured Yang, creating a frenzied and delightful challenge that is all about letting loose. Not to risk turning the players’ autopilot on, however, there are several pesky cash-depleting fish types that you’ll need to let slide by, all while juggling split-second prioritization of your best prospects. Each single round in Ridiculous Fishing feels like the consummate combination of all the best reflex-driven iOS games you’ve played to date. 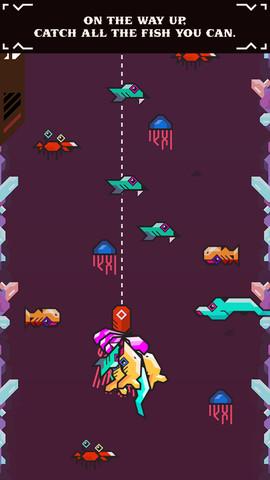 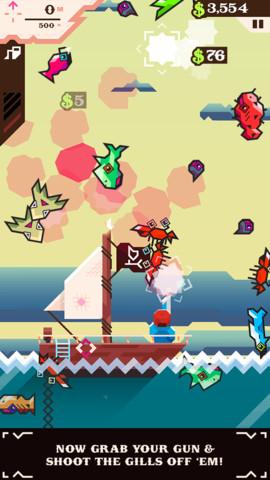 Instead of bore you with discussion about the game’s spectacular upgrade system, or explain how wonderful it is that Vlambeer tied upgrades to the delight of playing rather than paying, here’s a brief list of things I did in Ridiculous Fishing with in-game money.

The organic way in which insanely fun play drives the acquisition of currency, which in turn makes gameplay more satisfying proves how talented this team is. When upgrades provide key abilities, it’s a fine line to walk between making them fun to earn and ruining the game with gated progression, but Ridiculous Fishing never once feels like a chore. Outside of gameplay, much of this owed to the supremely original aesthetic, which crafts a hip, angular alterworld full of fish that feel like they were named by Willy Wonka, and adorned with a palette that makes real life look drab.

Little flourishes post-game menus and the store design will have you feeling like you’re playing the coolest theme park midway game around. And in a review culture where criminally little gets said about music, it’s enough to say that Suhrke’s genius soundtrack will be hard to top in its level of detail and creativity anywhere else this year (that isn’t another one of his own soundtracks). Major bonus points go to the way each relaxing sea ditty plays backwards as your line ascends to form an entirely different, but equally listenable mini-track.

Moreover…okay no, I’m just kidding. What are you still doing reading this!? Go get Ridiculous Fishing.