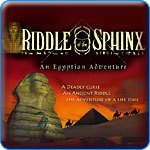 When a person hears about the Riddle of the Sphinx, it tends to resurrect imagines of Oedipus solving the Sphinx’s riddle and saving the city of Thebes, but you won’t find that storyline contained in this adventure game. Instead you’ll find story that centers on a missing archaeologist and his work on a secret chamber found beneath the Great Sphinx in modern day Egypt.

Riddle of Sphinx, which was created back in 2000 by Omni Creative but is now available as a new large file download, follows a young archaeologist as he searches for his missing mentor, Sir Gil Blythe Geoffreys in Egypt. Geoffreys disappears on the eve of his greatest discovery, the opening of the secret chamber beneath the Great Sphinx and he has left behind a series of clues in order for you to finish his work.

You begin the game at the dig site and clicking your mouse on the screen in the direction of the tents; you make your way into Geoffreys’ tent and begin looking through his stuff for clues. Here you can click on items like a box on his bed or a piece of paper under his pillow to pick them up or interact with them. While there is no people to talk to in the game, there are cassette recordings to find that you will have to listen to in order to gain important information.

Your interface in the game will give you access to your inventory for item information and item recall, as well as your usual save, load and exit features. Not all items can be taken in this game, so note taking is key if you want to be able to solve puzzles later down the road. Puzzles in the game are solved based on objects or clues you find throughout the game and generally their difficulty ranges from easy to downright frustrating. For example, the first puzzle type I came across was in Geoffreys’ tent and it required the lighting of a candle in order to read the hidden words on a blank piece of paper.

For a game created by two people back in 2000, this game surprisingly holds its own in certain areas but shows its age in others. The puzzles I found to be quite clever and though I wanted to pull my hair out over some of them, I loved that they kept changing up the type of puzzles in order for you to use every area of your brain to solve them. This game is definitely not for the shy.

Even the storyline holds up pretty well for a game that was created over 9 years ago, as you find yourself actually believing that such hidden chambers and puzzles could really exist in some unexplored region of the Pyramids somewhere. A lot of people love to believe that the world is full of undiscovered treasures and games like this give us the chance to fulfill our inner archaeologists.

While I was impressed with the game’s puzzles and storyline, the elements that unfortunately can’t hide its age were the graphics and audio. Looking almost like someone animated the entire game with sand, the graphics were grainy and dated and the audio though appropriately Egyptian sounding, it produced an in horrible midi format. It’s very unfortunately when a game with such wonderful elements like good puzzles, can’t overcome the small things like bad graphics and audio.

Knowing that this game was created by only two people, Jeffrey S. Tobler and his wife Karen, I must say I am impressed because this is a well thought out game with incredible intricate puzzles. However when you compare this game to some of the newer adventure games coming out of companies like the Adventure  Company or Telltales Games, it’s hard to recommend a 9-year-old game when I know there are better ones for the same price. All I can say for sure is that you if love a good challenge when it comes to your puzzles, then you will love what Riddle of Sphinx has to offer. If you’re still on the fence about the game though, you can download the 60 minute trial version of Riddle of Sphinx.