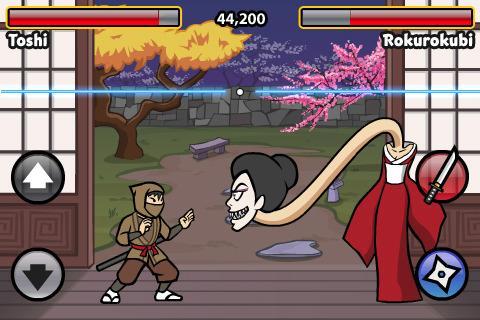 One of my favorite aspects of gaming on the iPhone is the crazy variety of games available. I don’t think I really knew what to expect when I was told I’d be reviewing a “rhythm fighting game.” I think I was picturing a fighting game with a decent soundtrack. What I ended up getting was something a lot more fulfilling and something I hope to see more of down the line on the iPhone.

I think Rhythm Spirit can most closely be related to a game called Gitaroo Man that came out on the Playstation 2, but anyone that’s played any rhythm game will see what’s going on here. It’s the same concept as what you see in Guitar Hero or Rock Band. A marker travels down a line on the screen and when it enters a certain zone on the screen you tap the corresponding button, triggering the sound, and in this case, action.

Not only are you tapping along to the music, but every tap you make also makes an attack or defends against them. In most rounds you have 4 buttons to worry about, up and down and sword and star. Those symbols travel along the line in the middle of the screen, and you’ll tap as soon as they reach the center. Every time you tap the sword icon in time your character on screen takes a swipe. When the enemy is attacking and you hit that symbol you’ll block.

What makes the game so interesting is that you’re not just playing through a song for points. It’s a battle, so you and your enemy get a standard fighting game health bar. Every attack you make takes down your opponent’s energy, and every missed block takes down yours. You need to defeat them before they defeat you. You’re not playing just to finish the song here and get a high score, you need to take the bad guy out to survive. I’ve never really come across a game that handled the rhythm genre like this, so I found the approach very refreshing. Everyone and their brother seems to have a rhythm game out these days, so it’s thrilling when someone finds a new way to approach it.

There’s a storyline stringing all 10 levels together, but you don’t need to follow it if you don’t want to. The musicis oriental in nature, and fits the timing and beats perfectly to the symbols on screen. This aspect makes or breaks a rhythm game, so it’s key that they got it right. The graphics look fantastic, and I found myself trying to watch the action as much as possible while still focusing what buttons I needed to hit. 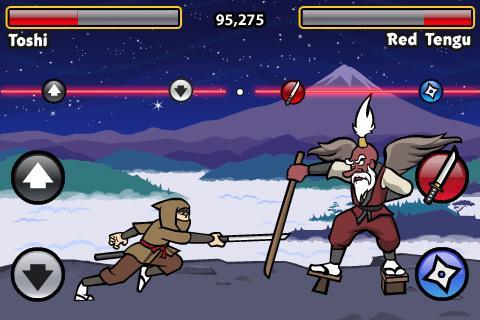 My only real complaint about Rhythm Spirit is that it’s a bit on the short side. With only 10 levels to be had, I played through the entire game in a little over an hour and half. Mind you, that was on normal difficulty – I can imagine the expert difficulty would keep me challenged for quite awhile. Thankfully, this is definitely the type of game you can enjoy playing through again for a better rank.

With a refreshing take on the rhythm genre and only a kinda-short adventure holding it back, it’s pretty easy to recommend Rhythm Spirit. The music and graphics are solid, and are proof that a lot of care and time when into the game. I’d love to see some more stuff added down the line, or maybe even a whole new sequel in a new location!

Dawn of the Dragons Review