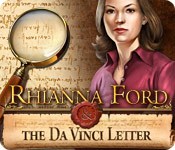 If you’re an antiques expert and your boss offers to fly you to Rome on company dime to investigate a rare and valuable find – a letter penned by Da Vinci himself – you’d probably be over the moon, right? But Rhianna Ford is less than thrilled. You see, it was Rome where her husband Xander disappeared several months ago under mysterious circumstances. Her boss forces her to go anyway (he’s a bit of a jerk – ok, he’s a big jerk), and so it’s off on another hidden object adventure with Green Clover Games’ Rhianna Ford & The Da Vinci Letter.

The game is nothing if not methodical. You’ll start by helping Rhianna pack for the jourrney and find a babysitter for her daughter, then check into her hotel room, visit her contact in Rome, and so on. When compared to other hidden object games set in places like colorful theme parks or fantasy kingdoms, the locations of The Da Vinci Letter seem understated and a bit drab in comparison.

To the game’s credit, though, the graphics are crisp and it’s obvious that some thought went into designing each scene and placing the hidden objects into them. The music is decent if unassuming, and the comic book panel cutscenes that move the story along between chapters are surprisingly dynamic and, well, comic book-like, instead of the lifeless panels often seen in other casual games that encourage players to skip the story altogether. Unfortunately, the hammy voice-acting and wretched attempts at foreign accents prove to be an annoying distraction.

In terms of gameplay, it’s fairly typical hidden object stuff although the game does throw in a couple of twists. To clear each room you’ll need to find a certain number of items on a list, some of which are relevant to the scene, and others of which are randomized (like scissors, an apple, the letter "A," and so on). The game offers unlimited hints with a meter that recharges in a reasonable amount of time, so you’ll never get truly stuck.

Some items are greyed out, which means you have to solve a puzzle of some sort to access them, such as playing a safe-cracking mini-game to gain access to the safe’s contents, or collecting 8 ink bottles and then arranging them in the proper order in their case. Most of the mini-games are actually fun, and some – like comparing ink swatches to verify a letter’s handwriting, or hacking into a computer to find information – are quite unique as well. It’s a shame that all these puzzles can be skipped, though, so I never felt any real accomplishment for solving any of them.

Although it does boast the occasional inventory puzzle, Rhianna Ford feels more like a traditional hidden object game than a full HOG adventure like Mortimer Beckett or Dream Chronicles. A couple of gameplay twists do make the game feel slightly more interactive than a straight-up HOG too, though. For one thing, there’s a cellphone that you can use to make calls to the people in your address book, and sometimes scenes will have people in them who you can talk to by clicking their portrait at the top of the screen. Sometimes you’ll need to talk to people to learn clues about what to do next, or to move the story along. (Again, it’s not quite as exciting as it sounds because the game always makes it painfully obvious who you need to talk to next.)

Aside from the previously mentioned issues, I was also put off by some vague item labelling. For example, I was asked to find two glasses, but it didn’t let me click on the fruit drink on the dresser – which was clearly in a glass! (It turns out that the game meant two pairs of glasses – as in eye-glasses.) On another occasion I was asked to find an antique sword, but was unable to click on any of the rack of swords on the wall; rather, it was another sword leaning up against a desk. Some items names simply aren’t descriptive enough – like "parcel."

The game does offer a decent length, with significant replay value given the randomization of some of the objects. At the same time, though, you’ll find yourself visiting some of the locations more than once, and even playing some of the same mini-games over again, which makes the game length feel a bit padded.

Rhianna Ford & The Da Vinci Letter is slightly better than the average hidden object game, but sadly with so many of them on the market that’s still not saying a whole lot.