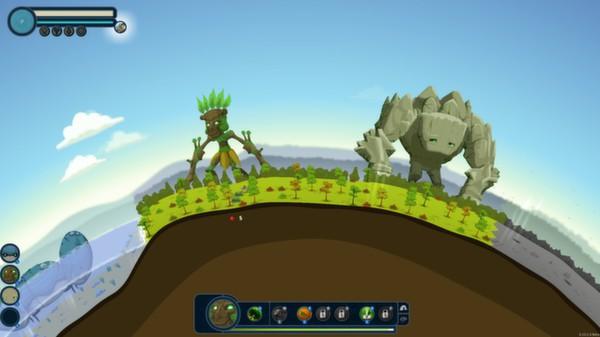 Reus, make it fair; I love a town with sunlight in its air.

In the beginning, there was a vast wasteland of interactive nothingness.  And so Man created the video game.  Man then got tired of playing space shooters and sword-wielding heroes, so he created the god game.  One in-game, all-powerful planet spirit got tired of running everything, so he created the Reus: the eponymous Giant designed to do the bidding of the planet through manual labor and you, the player whose not-so-distant ancestor invented the video game.

Reus gives you control over four of these planet-puppeteered Giants simultaneously, each wielding different powers over nature: the Ocean Giant, Forest Giant, Rock Giant, and Swamp Giant.  Their goal is relatively simple: create habitable, resource-laden biomes that nomads will want to settle and villages will be able to thrive within.  And this goal is simple at the start: a few patches of forest land and a handful of blueberries will attract a caravan of settlers fairly quickly.  Once a village has sprung up, it remains for the long haul—they will not pack up and move away if you ignore them, they will not die from lack of food, and they build and maintain their homes with no intervention.  No, the biological livelihood of villagers is not your concern: it is their collective prosperity and overall growth that demands your Giants’ attention.

This prosperity is measured through resources provided by the Giants and attributed to one of three categories: Food, Wealth, or Technology, with many items fulfilling more than one of these.  Plants may provide Food and Tech, animals offer Food and Wealth, and mineral mines fulfill Wealth and Tech.  Each item, no matter its resource attribution, takes up one patch of land; while roaming assets (like animals) will provide resources across all patches within their range, only one item can be built by the Giants on each patch.

All of the resources available across any patches within a village’s borders will add up to the total amount of resources available to that village.  Over time, villagers automatically collect these to add to their total “in use” resources, which directly correlate to their actual prosperity.  Increased prosperity allows villages in Reus to grow both in size—creating more patches and allowing more resources to be planted by your Giants—and modernity—which advances villages from small tents to stone houses and beyond.

While the autonomous villagers are busy collecting the fruits of your all-powerful labor, your Giants will be upgrading and improving those same resources through two key components: transmutations and symbioses.  Transmutations allow Giants to transform patches of resources into upgraded items through the use of “Aspects,” special traits that add additional features to a patch.  For example, your Ocean Giant can create chickens in the forest through his “Domestic Animals” power.  If he then uses the “Herd Aspect” power on those chickens, they can be upgraded into rabbits and then deer.  Deer provide more food than chickens and a different symbiosis option. 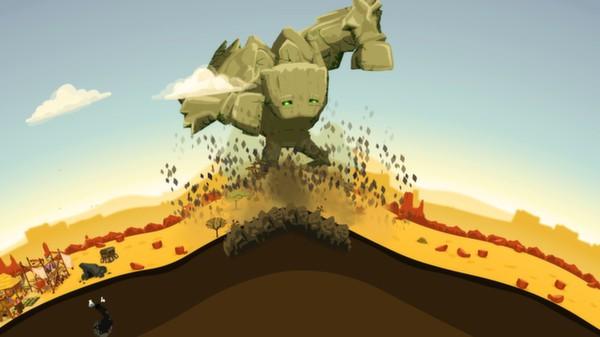 Symbioses provide bonuses to patches when specific requirements are met.  Those deer the Ocean Giant created have the “Grazer” symbiosis: if they are near Dandelion, Foxglove, or Nightshade, they’ll provide an extra four Food and two Awe to the total resources available.  Many transmutations and symbioses require powers from multiple Giants to be combined; while the Ocean Giant commands the Herd Aspect personally, each of the other Giants have their own specialized Aspects that allow them to upgrade animals and other resources differently.

Many of these Aspects and other powers are earned through the completion of Projects, special requests received from villages.  Projects are a specific type of building that the village wishes to build but needs additional resources to complete, such as a school or circus.  If their conditions are met within the time limit given then the Project is completed, its resource-rich building added to the village, and an Ambassador will be offered to the Giants.  These Ambassadors are the means by which Giants grow stronger; they ride upon their appointed Giant’s shoulder and unlock one of the powers that are locked at the beginning of each new game.  These powers are usually Aspects, allowing the Giants to thus improve the resources at the village’s disposal and continue the cycle of give and take.

Thus, unlike many god game avatars who work for the respect and acknowledgement of their subjects, Reus‘s villagers are very aware of their Giants.  Sometimes they are inspired by the creations given them, increasing their Awe and lessening the chance that they will attack other villages or the Giants themselves.  Other times they become moved to greed by an unbalanced array of resources, resulting in aggression against their neighbors and benefactors.  This forces a strategic balancing act of not giving too much to a village too quickly, as much as you may want to overload them with resources.

This necessity for balanced growth adds an extra layer of difficulty because of the game’s time limit: each new game, or Era, allows you 30 minutes to make the most of your planet.  Longer games, up to 120 minutes, become available after completion of enough Developments.  Developments are in-game challenges that are tallied at the end of an Era.  They vary in their requirements, including tasks like attaining a certain amount of total prosperity or specific resources, completing villages that have oceans or mountains within their borders, or ending an Era with a highly aggressive village.  These Developments will also occasionally unlock new transmutations, making them essential to improving your Giants’ powers and ultimately building more prosperous villages. 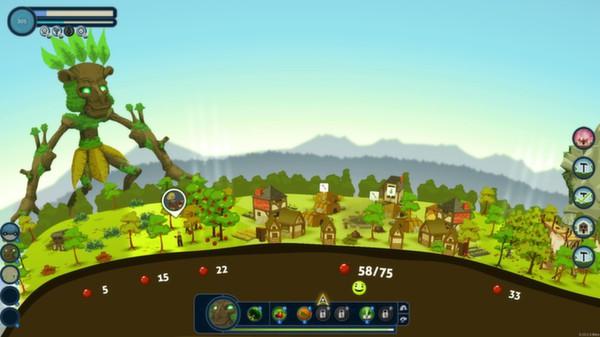 All of these mechanics and features work together to create a cycle of progression and challenge that is utterly engrossing.  While Reus begins with a seemingly simple concept—provide resources to grow villages—its almost puzzle-like use of transmutations, symbioses, and other cause-effect combinations result in a shockingly deep experience with nearly endless combinations for creation.  The start of each new game does often feel much the same—your Giants begin with the same powers unlocked and can only do so much—creating a repetitive hump that must be tolerated to get back to the deeper gameplay.

But it’s worth it.  The level of thoughtfulness and detail that have gone into the gameplay are just as visible in the game’s art direction: workers toiling away in the mines you’ve built, foxes peeking out of their tree stump dens, surprisingly varied clothing on villagers across different biomes.  There’s an almost construction paper-like quality, with its thick blocks of bright color throughout the world: swamps are nearly radioactively green, deserts shine under a constant midday sun, and forests are lush with an untouched brush.  The Giants are imposing, yet lovable.  And so is Reus.